When I was nine. I loved Walter Farley’s horse books. When I had read them all, I decided to write mine own, a 150-page, handwritten story entitled Golden King. From that point on, I always thought I’d be a writer somebody. In college, I planned to be a journalist, then marriage and kids came along, and I began teaching to help support the household. Life intervened again, and I headed to law school. When I finally retired, I began to write my first true novel.

A:  In years, it wasn’t a lengthy process. I began writing what became my first published novel in 2009, and it was published in 2012. In between, were 160 rejections from agents and publishers. It took a lot of persistence, re-writing, and belief in my story.

I have been published by two small presses. My sixteen fantasy novels were published under a pen name by one publisher, but when I switched to mysteries, I had to find a new publisher. Fortunately, it didn’t take so many rejections the second time. 😊

Since I knew what I wanted to do in retirement, I set up a small office in my home just for writing. I much prefer writing on a desktop, so I have it set up with a sturdy desk, printer stand, credenza, shelves, and cabinets to store info, and a rolling storage bin that houses most of my historical books.

Actually, neither. Silence drives me nuts, and I end up singing to music. I prefer a TV running in the background to provide white noise – even better if it’s showing a series I’ve already watched.

None of the plots are drawn from real life, although I have woven some historical events into my Regency mysteries. Character traits are frequency pulled from people I know or people I have observed. When I spend time in waiting rooms, long lines, or places like airplanes, I frequently watch the people round me for new traits that may appear in the next novel. So far, no one has said, “Oh, I know who that is.”

I have several lists of names that were popular during the Regency-era. When I have to name a new character, I run my finger down those lists until something strikes my fancy.

Lady Anne Ashburn has the ability of total recall.

I do my best writing late at night in gown or pjs.

As long as we’re dreaming, I would love to have written The Lord of the Rings trilogy. It is so beautifully written, tremendously re-readable, and I believe will still be read 100 years from now for its relatable characters and engaging plot.

Many years ago, I had an opportunity to teach in Australia. I’d love to know where that would have led.

Just one??? Tech support based in another country that does not speak my language.

My kindle, my notebook, and a bottle of wine.

Who’s your all-time favorite literary character (any genre)? Why?

If I can only choose one, it would be Sherlock Holmes who introduced me to the mystery genre that has given me thousands of hours of reading pleasure.

I’m currently writing the Viscount Ware mysteries under a four-book contract (they are all drafted), and I hope to have them available to readers within the next eighteen months. After that…I love these characters and have my fingers crossed that the contract will be extended.

I want to thank you for hosting me. I’m delighted to visit your blog. 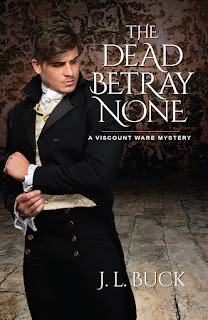 The Dead Betray None

An aristocratic spy and a highborn lady cross paths over a dead body.

1811 England seethes with discontent. A self-indulgent prince regent sits on the throne of a country at war with France, on the brink of war with America, and facing growing rebellion at home.

Lucien, Viscount Ware, recently home after four years on the Continent as a spy for England, finds life in the haute ton tedious. He secretly agrees to handle a few delicate matters for the Crown's private spy unit at Whitehall. A housebreaking at a country house party seems a strange assignment until he discovers that a French cipher, the key to Napoleon's war codes, was among the stolen items. As he follows its trail to London's notorious rookeries and into its glittering ballrooms, he faces a growing threat of treachery from more than one direction.

Lady Anne Ashburn missed her London season while caring for her invalid mother in the north country. A new nurse allows her to visit relatives, where she becomes embroiled in a blackmail plot. To avoid a terrible scandal, she goes to London to face down the scoundrel threatening her family.

The night of the elegant Christmastide Ball, Lucien finds Lady Anne standing over a corpse. What happens after that—the risks they take, the intrusion of a notorious crime lord, society gossip, and good intentions gone awry—sends them spiraling into danger and potential disaster for England’s war effort.

Thanks so very much for inviting me to your blog! You run a terrific site.

You’re welcome JL! And thanks for the lovely compliment.