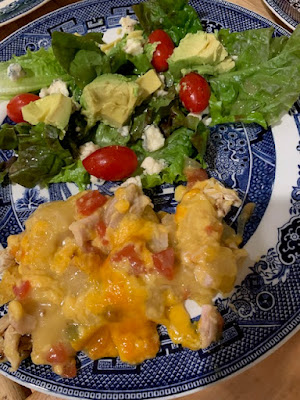 Today we welcome back the prolific Judy Alter, author of the Kelly O’Connell Mysteries, the Blue Plate Café Mysteries, the Oak Grove Mysteries, and her latest series, the Irene in Chicago Culinary Mysteries. Judy has also published historical novels, young adult novels, nonfiction, and cookbooks. Learn more about her and her books at her website.

King Ranch casserole is Texas food. Henny learned to fix it in her mom’s kitchen, and she serves it often to Patrick who loves it. Irene disparages it as Texas food, and she’s not alone. Some noted Texas cookbook authors have been scathing in their criticism of this dish. Texas food historian Mary Faulk Koock wrote, “I suppose it could be made palatable,” but caterer Tilford Collins, who serves some of the oldest families in South Texas, was more blunt. “Never, never, never.” In Texas Monthly, journalist Mimi Swartz described it as a study in beige and yellow and criticized it as bland despite the chile-laced Rotel tomatoes. Bland is a quality Texans generally despise in their food. And yet, most Texans consider this dish a staple.

Culinary authorities agree that is probably derives from the Mexican chilaquiles which combines tortilla chips, tomatoes, chicken, cheese, and chiles. Swartz suggests it may have been the inspiration of an anonymous King Ranch cook with a preference for chicken, even though he was at a beef ranch. I have been to the King Ranch in far South Texas, largest ranch in the US, even spent the night in their guest quarters. The food was outstanding, but there was no sign of the casserole.

That anonymous cook probably shouldn’t be blamed because the ingredients of today’s casserole are from the fifties when canned soup casseroles hit the heyday of their popularity. Casseroles that could be made quickly and frozen for later use were a big part of freeing housewives from the kitchen in the fifties and sixties. For several years, the casserole stayed a Texas secret, but in the seventies, it began to creep across the country. You may already know it, but if not, here’s an authentic version.

There is some version of the recipe—and there are many—in every Junior League cookbook from Texas, and chef Dean Fearing guessed that it is served in almost every family kitchen in Texas. Generations of Texans swear by this dish.

And when Henny finds herself representing Texas is a cookoff against Irene’s French recipes, what does she choose? King Ranch. Here’s her recipe:

Irene would never make this casserole—Texas food, you know—but if she did, she’d do it the old-fashioned way and boil an old hen. Henny believes in shortcuts, and she uses a rotisserie chicken. Henny is also a great advocate of canned soups in casseroles, something many “gourmands” frown on these days.

1 can cream of mushroom soup

1 can cream of chicken soup

1/2-1 can Rotel tomatoes, choose the flavor and heat you like; Henny likes lime/cilantro.

Pour the soups and tomatoes over the casserole How much tomato you use depends on how hot you want the dish. Cover with grated cheese and bake at 350° until cheese melts and is brown and casserole is bubbly.

Note: some people add green bell pepper. Henny despises bell pepper and does not use it. 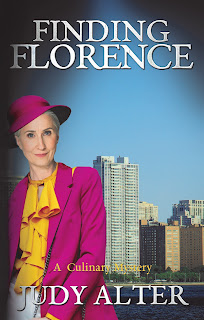 Irene is back in town. And Henny’s life is a mess.

Irene’s “voices” have told her that something is horribly amiss with a person dear to her.  When she arrives, she learns that a death notice for Florence Sherman, her sometime friend, has been published in the Sun-Times. Once Irene discovers her friend’s body is missing, the diva chef refuses to leave Chicago until she solves the mysterious disappearance. But, with Irene in Chicago, Henny’s successful “From My Mother’s Kitchen” TV cooking show and her precious time with Patrick, husband of her dreams, are seriously compromised by Irene’s insistence that finding Florence trumps any other concerns.

There’s a nice bit of Chicago history and lots of food talk An appendix of recipes is attached.