Today we sit down for a chat with former Metropolitan Opera violinist and current award-winning mystery/thriller author, lecturer, screenwriter, and arts journalist Erica Miner. Learn more about her and her books and find ways to connect with her at her website.

It was when I was studying screenwriting in Los Angeles in the early 2000s. After writing a few screenplays, I suddenly was besieged with an idea for a novel, based on some of my rather steamy experiences traveling in Europe, and a title: Travels with my Lovers. My mentor told me to go for it and guided me into creating the book. After that, I became completely hooked on novel writing.

I was a bit impatient to see the book published, so I explored the world of POD and published Travels with my Lovers in 2003.

My next novel, Fourever Friends, was published by an Indie publisher in 2009. Then I got the idea of adapting my murder mystery screenplay into a novel, was signed by a traditional publisher, and my Opera Mystery series was born. The two sequels were published by the same publisher, but the third one released in the middle of the pandemic and only in digital version. I then found another publisher that offered me a contract to re-publish all three novels in all formats.

I have a super quiet, private home office at the far end of my house with a picture window overlooking a hill with a view of lush Washington state greenery that’s inspiring. My desk is set up with a Mac desktop computer and the atmosphere is conducive to creativity: all my favorite books, photos and other accoutrements sit on the shelves above and surrounding my desk. That is my workplace, and as soon as I sit down at the desk the ideas start to flow—at least most of the time!

I am first and foremost a musician, so I have music in my head constantly. But I cannot concentrate on filling blank pages unless I have absolute silence outside of my head. The only time I have music playing is when I’m creating my opera lectures and I need to listen to the specific music I’m including in the lectures.

A large percentage of my plots and characters are based on people I’ve known and worked with, and the places associated with them. Certainly, Aria for Murder (formerly Murder in the Pit) is very much based on my own experiences at the Metropolitan Opera. Its characters, for the most part, are combinations of the different people I worked with closely at the Met. The protagonist, Julia, is based on myself when I was first starting out with the company. It was a bit different with Travels with my Lovers. Since it was written in first person and is quite spicy, I was often asked at my book events how much of it was real. I generally answered, “Only the author knows for sure.” But my publicist suggested changing my reply to, “Every word!”

Naming characters is one of my favorite parts of the process. I like to use either favorite names that I’ve always loved or names that are somewhat related to the real names of the people on whom I base a certain character. Julia is named after the daughter of my best friend at the Met. Another character who reminded me of my late brother got his name. One opera singer in the sequel was named for a famous female conductor with whom I have a bit of a history. And so it goes.

As you can tell, my settings are very real. Both sequels in the series take place in other renowned opera houses. There are so many real theatres and great cities in which to set murder mysteries, I don’t have to make one up!

Julia’s best female friend and colleague, Katie, is obsessed with food and is always munching on some snack or other. She has a habit of trying to foist them on Julia, which is both annoying and charming.

I’m a bit OCD, but in some weird ways. I’m always adjusting things to look symmetrical and in place. But I have a funny way of raising each window shade to a different level for reasons that only I can understand. It drives my friends crazy.

Fear of Flying, by Erica Jong. It was groundbreaking and expressed what women of a certain generation wished they could be free to explore in their best, most liberated lives. The book was instrumental in the Women’s Liberation movement.

Too many to name!

People who don’t know the proper way to use its and it’s. There are other grammatical sins that drive me crazy, but that’s number one.

What a great question. I’m usually asked for one thing, but for three I really had to think hard. 1) an unlimited supply of drinking water 2) a device that plays music 3) an outlet to charge the device.

Having to clean my house during the pandemic. I generally do the lighter stuff on my own, but I had hired help every other week for the heavier duties. My husband and I teamed up to do the big clean, but we’re not professionals, and it was exhausting.

David Copperfield by Dickens. It’s absolute perfection in every way. Dickens has always been my favorite author, closely followed by Charlotte Brontë.

I love mountains, and we have more than our share here in Washington. But the ocean is my true love. I grew up in the Midwest, and the first time I saw the Atlantic Ocean (Coney Island, of all places), I was smitten and vowed I would never live far away from a coast. I’ve kept to that vow ever since.

I grew up in a big city, Detroit, and have always lived in or near one. I love visiting the countryside, but I can’t imagine living there full time.

I became passionate about writing even before I started to play the violin, since elementary school when I was placed in an afterschool program for Creative Writing. Creating plots and characters and weaving them together to tell stories is one of the most satisfying pursuits for me. My books not only reflect my life experiences but also my perspectives on the unique joys that music has to offer. Music was my first love; it was playing constantly in my household when I was growing up. Writing about music, whether fiction or nonfiction, is one of my greatest pleasures, and I love sharing that passion with my readers. 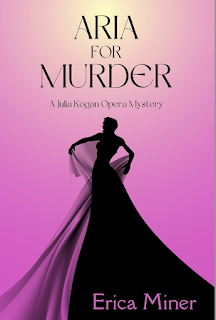 Excitement mounts as the moment arrives for brilliant young violinist Julia Kogan’s debut in the orchestra of the world-renowned Metropolitan Opera. But the high-stakes milieu of this musical mecca is rocked to its core when, during an onstage murder scene, Julia’s mentor, a famous conductor, is assassinated on the podium. Thrust into the investigation when her closest colleague in the orchestra is named chief suspect, Julia teams up with opera-loving NYPD detective Larry Somers to solve the murder. In the process, they are shocked to discover the venerable opera house is rife with a web of secrets, intrigue, and lethal rivalries. But all bets are off when Julia suddenly finds herself the real killer’s prime target.