Beth Camp has been an international banker, a social policy analyst, and a college English instructor. Upon retiring, she turned her attention to writing novels, blending historical fiction with romantic suspense. Learn more about her and her books at her blog.

Can you imagine a month in Paris? Or another month in Edinburgh, exploring castles and museums? 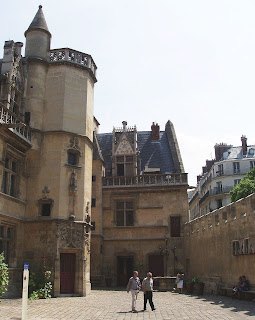 In Paris, at the Musée de Cluny (left), now also known as the National Museum of Middle Ages, we opened the gate to what was once a Roman bath and once a retreat for abbots. The ornate door was embellished with symbols to show the abbots had completed pilgrimages to the Holy Land. Inside, the museum featured a most famous medieval collection of many religious statues, illuminated manuscripts, and more. Upstairs, we entered a room with low light to protect the tapestries.

Here, I discovered the six very famous tapestries named the Lady and the Unicorn. Woven in the 15th and early 16th Centuries in the millefleurs style (meaning ‘thousand flowers’) and lost for generations in a dusty attic until the Musée de Cluny purchased them in 1882, scholars have named the first five tapestries after the five senses (touch, taste, hearing, smell, and sight).

Scholars have argued about the meaning of the sixth tapestry to this day. For this sixth tapestry shows a young woman, flanked on either side by a lion and a unicorn, and an inscription which translates “To my only desire.” Many believe she is renouncing worldly goods as she returns her jewelry to a small casket.

Scholars also argue about the meaning of the many symbols on these tapestries. I will only note that the lion and the unicorn are also key symbols of the Scottish Coat of Arms during the time of James V.

But the germ of an idea for The Seventh Tapestry didn't begin until we visited Stirling Castle in Scotland. We wandered through the castle grounds, docents in period dress answering our questions. The walls were covered with tapestries. I found a mermaid carved in stone on the entry to a basement under the Great Hall which was built in 1501.

Here’s an artist’s rendering of how the walls were richly decorated with tapestries during this time. 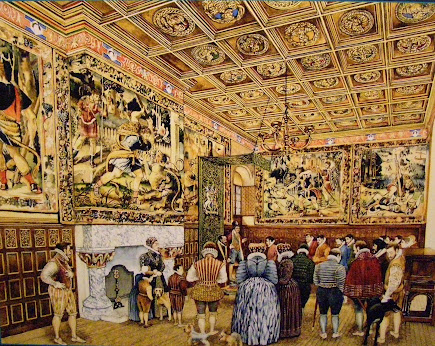 We walked out behind the Great Hall through the North Gate to find a Tapestry Studio set up with four great looms, the weavers busy at work. They were reconstructing the Hunt of the Unicorn, a set of seven tapestries currently held in New York City at the Metropolitan Museum of Art. The head weaver proudly answered our questions, for we wanted to know why they were working on recreating these tapestries. Today, these gorgeous tapestries are displayed in the Queen’s Bedroom at Stirling Castle.

Here, I learned of James V, his love of tapestries, and of his Summer Queen. According to the terms of the Treaty of Rouen, James V must marry a princess of France.

Dutifully, he sailed off to the court of Francis I, anticipating his coming nuptials. But he fell in love with Madeleine, another daughter who suffered, according to the records, from tuberculosis. Francis I wanted Madeleine to join a nunnery to protect her health. But, James V convinced Francis he should marry Madeleine, even if he could not speak one word of French. They were married at Notre Dame in Paris on January 1, 1537, and she sailed home with him. Sadly, she died on July 7, 1537, one month shy of her 17th birthday, forever known as his beloved Summer Queen.

Ah, but those tapestries resonate with mystery. What if (the writer’s favorite question), James V had commissioned a special set of seven tapestries to honor his Summer Queen? And, what if, when she died, he could not bear to look at them, and so he refused their delivery? What if there were a seventh tapestry, this one to honor his bride? And so began the story of The Seventh Tapestry, my first art crime mystery, out of the wanderings through several museums, along the winding halls of castles, and between the lines of recorded history.

Click here to read more about the Lady and the Unicorn Tapestries at the Musee de Cluny. 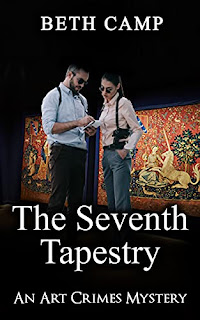 When precious artifacts go missing at the Museum of Medieval Art in Edinburgh, Sandra Robertson, a newly hired curator, is immediately under suspicion. But, when she’s asked to help find out who’s involved, Sandra ignores her attraction to Neil McDonnell, art crimes investigator assigned to the case, and gets to work. After a priceless 16th Century tapestry goes missing, Sandra begins to receive threatening phone calls. Do Sandra and Neil have a future together? What will they risk to recover the missing artifacts, stop the thefts, and find out who’s behind a series of mysterious deaths?