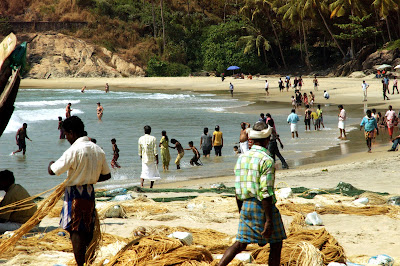 Susan Oleksiw has lived in India and returned often for short visits. The Anita Ray series is set in a part of South India she knows well, Southern Kerala. She also writes the Mellingham series, set in a small town on the New England coast and featuring Chief of Police Joe Silva. Susan co-founded Crime Spell Books, which publishes the annual anthology of Best New England Crime Stories. Bloodroot appeared in 2021, and Deadly Nightshade will be published in November 2022. Learn more about Susan and her books at her website.

Anyone who gets involved with India, on any level, cannot fail to recognize the vastness and richness of its culture. There are so many ways to discover this land, and so many worlds within it to learn about. When I began crafting a novel set in India, I struggled to find a focus. It took a while, several false starts and dead-ends, but at last, the pieces came together. Anita Ray is an Indian American photographer living in South India at her aunt's tourist hotel on the rocky coast of Kerala. Foreigners look out over a beach where guests swim and fishermen work their nets.

To give the series more cohesion I wanted a recurring format for the titles. Each entry in the Anita Ray series revolves around an aspect of a particular deity. This seemed the best way to tighten the focus on parts of the complex culture of this ancient civilization.

Picking the deity of the title is a big part of the fun of the series. I may have an idea for a story line, but the particular image I choose becomes a heavy influence. Kali, the goddess of diseases and destruction, can be frightening, but as her younger prettier self, she can be enchanting. Her terrifying side, along with various rituals she participates in, seemed the perfect choice for the first book, Under the Eye of Kali.

For some time I wanted to write about how traditional cultures have practiced conservation long before it became fashionable or necessary, and after a stay at a traditional home in central Kerala, I found my vehicle. The kaavu is a plot of land set aside by the homeowner for the deity that no one may enter. An image of the presiding deity sits on the boundary and is honored daily. The home where I stayed had a kaavu presided over by Bhairava, a manifestation of a fierce Shiva. From that came the title for the second book, The Wrath of Shiva. Parvati is well known as the consort of the deity Shiva and seemed a good choice for a story about marriage. For the Love of Parvati takes Anita and Auntie Meena into the mountains during the monsoon to visit relatives.

Indian names, terms, and general vocabulary are spreading throughout the English-speaking world, so when I settled on Krishna, the god of love, as the next deity to appear in a title, I wasn't worried about who would recognize it. When Krishna Calls is all about what we will do for love, how far we will go to protect those we care about. While cruelty threads its way through the narrative, pinching the heart of a business woman and curdling the life of a young boy, the devotion of a mother redeems them all.

The fifth entry, In Sita's Shadow, calls on the story of Sita to set the stage and direct the narrative. In India, everyone knows the name Sita, the wife of Lord Rama, both king and deity. She is the epitome of the virtuous woman and perfect wife, loyal and devoted and honorable. When her husband is exiled to the forest, the result of jealousy by another member of the royal family, Sita dutifully goes with him. She's kidnapped, rescued, and restored to her lord, who is also restored to the throne. When rumors spread that maybe she wasn't so virtuous when she was alone with her abductor, she calls on the earth to testify to her purity, and the earth does so. Indians revere her, but she's a tough act to follow. 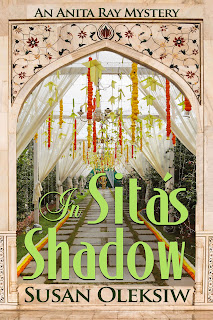 Hotel Delite, perched on the rocky coast of South India, has welcomed all sorts of tours. Every one of them has been touched by the beauty of the milky moon rising over the Arabian Sea and glowing over palm trees and clean white beaches. But one group of Americans seems immune to the setting, and very odd in other ways.

Angela Deetcher, a renowned scientist, is a dour creature and seems intent on maintaining an extreme skepticism of everything she sees. Sandra Stover is laconic to the point of muteness, though she is always beautifully coiffed and attired. Larry Forche has eyes for no one else but Sandra and is undeterred by her coolness toward him. Crocker Dawes seems to be the only one pleased to be in India, but no one sees him after he checks in. He disappears the first morning, and the only one who knows he has been in and out of the hotel is the maidservant who cleans his room. But at least the tour leader, Kenneth Maxinter, seems normal. Enthusiastic and gregarious, he encourages his charges to see everything and presides over meals with energy that is exhausting.

When one member of the tour is found dead, Anita and Auntie Meena prepare to tell the other members and cope with their reactions. But the tour members don’t react. They are quiet, still, and nod, offering little more than perfunctory acknowledgments. At least until Anita tells them who the corpse is—Kenneth Maxinter. They insist she must be mistaken.

Tourists have many reasons for coming to India, but as Anita explores the oddities of this particular tour group, she learns of other reasons she had never before considered.

So glad you have a new book published in this excellent series! Best wishes.

Thanks, Jacquie. The Anita Ray series is loads of fun to write. I'm glad readers enjoy it.

I want to thank Lois Winston for hosting me on Friday. It's always a pleasure to join Anastasia and her friends.