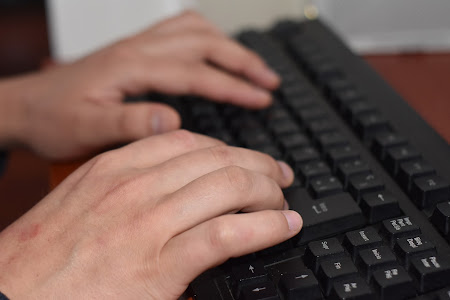 Today we sit down for a chat with thriller author Jeffrey James Higgins. Learn more about him and his books at his website.

I’ve wanted to write novels since my parents read me bedtime stories. My grandfather, Nejm Aswad, was an author and philosopher, so maybe it’s in my blood. I’ve always found comfort in stories, in all forms. I’ve considered myself a writer all my life.

I started writing fiction when I was six years old. Hopefully, my craft has improved since then. My undergraduate degree was in journalism, and I worked as a reporter after college, then I pivoted into 25 years of law enforcement. I retired in 2017 and became a full-time author. Since then, I’ve published dozens of essays and stories, and my first novel, Furious: Sailing into Terror, came out in 2021.

I’ve traditionally published two novels, both with Black Rose Writing, but I’ve also self-published a novella, so I guess I’m technically a hybrid author. I see risks and benefits to both paths, but I’m searching for a new literary agent to continue pursuing the traditional route. The only way to generate a decent income from writing is to have a breakout novel, and the best chance of doing that is through traditional publishing. At least that’s my strategy.

I do most of my writing on a Mac in my home office, but I also dictate when I go for daily walks. It takes me three hours of typing at my desk to reach my 2,000-word daily goal, but I can hit that number in an hour when I’m dictating. I recommend Dragon software for dictation.

I prefer to write while listening to music. I’ve become a big fan of Spotify albums and playlists that allow me to capture the mood of whatever I’m writing. Some of my favorite albums and playlists are Jaws, Iconic Soundtracks, The Shining, Game of Thrones, Vivaldi’s Four Seasons, Thriller Reading, The Conjuring, and The 50 Greatest Pieces of Classical Music.

My characters are fictional, but I set them in the real world, so I use actual places and often incorporate world events. Unseen deals with a real-life terrorist conspiracy. I’m currently working on The Havana Syndrome, a techno thriller that deals with the real-world attacks on diplomats around the world. I read a CIA report in January that characterized the attacks as anomalous health incidents. I knew that was untrue, so I decided to write a novel that could explain their report. I also use my experience as a cop and agent to bring realism to my fictional plots and character. I chased terrorists around the world and was in combat, so I write realistic scenes.

Character names are important to me, and I love the process of naming them. I’m drawn to antiquated names. Here’s a list of my protagonists in my novels: Dagny Steel, Malachi Wolf, Emily Miller, Adam Locke, Samantha North, Nathan Burke, and Mattie Brown. The names must capture the essence of the character. I determine the age and ethnicity of my character first, then I research popular names from their year of birth. Here’s a good resource: https://www.ssa.gov/oact/babynames/decades/

I use real settings for my stories, because I enjoy learning about different locales when I read a novel. Even if I’m already familiar with a location, it’s fun to read a fictional story in a place I know. If something awful happens in a private setting, like a restaurant, I usually create a fictional business, so I don’t put a real person’s business in a bad light. I always use real government agencies and departments.

All my characters have unique personalities with distinct attributes, challenges, and interests. My unpublished murder mystery, Shaking, just won the Claymore Award. In that manuscript, my protagonist, Emily Miller, has bipolar disorder. It’s a disease and not a quirk, but it’s a serious condition that impacts her character and her journey through the story. In Unseen, Malachi Wolf has multiple sclerosis. People deal with health challenges all the time, so I try to humanize my characters by giving them conditions that inhibit their ability to achieve their goals. Overcoming adversity is a theme in all my novels.

The last time you interviewed me, I told you my wife calls me Mr. Monk because I have a little OCD. This time I’ll mention my health condition, alopecia universalis. I’m completely hairless, which is kind of a blessing, because I’m always ten degrees cooler than everyone around me. I gave the condition to my antagonist in Unseen.

Books like Treasure Island made me want to be a writer. As a young boy, I was enthralled by the James Bond novels, and I remember my excitement waiting for each new Tom Clancy novel to come out. I’d love to write something energized readers the way Fleming and Clancy did for me.

I’ve been fortunate not to have too many regrets. I’ve always attempted to do what interested me and make the most out of life. I started as a reporter, worked as a cop and federal agent, and now I’m an author. One thing I would do differently would be to continue writing while I was in law enforcement.

Here are my big five:

5)    People who talk in movie theaters.

Can I ask for a sailing yacht and a shortwave radio? After satisfying the hierarchy of needs, I’d want companionship, then an unending supply of books.

I’ve been working since I started mowing lawns around age 12, so I’ve had plenty of bad jobs. One summer during college, I was a caretaker at cemeteries in Harvard, MA. Graves dated back to the 1600s, but one cemetery was active. It made for some creepy days.

Who’s your all-time favorite literary character (any genre)? Why?

That’s a difficult question for a lifelong reader, so I’ll cheat and give you several. Sherlock Holmes, James Bond, Jack Ryan, John Corey, Harry Bosch, Mark Watney, and Adrian Monk. I like distinctive characters who use their minds to achieve their goals.

I love hiking in the mountains, but I’d choose the ocean first every time. My ancestors were seafarers on both sides of my family, and I have the ocean in my genes. I’m drawn to the water, which is why I always live near it.

I grew up in a wooded town outside of Boston, which is probably why I’ve lived in cities my entire adult life. I’m at home in a condo, where I can hear traffic, people, and the sounds of life. Cities are vibrant, and they stimulate my creativity.

I split with my agent in May, and I’m actively seeking new literary representation. I have one nonfiction manuscript and three fiction manuscripts ready to go. I’m editing the fourth right now, so I hope to have multiple books published in 2023.

National Geographic’s Narco Wars just aired an episode about my journey from 9/11 to hunting the world’s most prolific narco-terrorist. “Chasing the Dragon: Narco Jihad” is available on Hulu. https://www.hulu.com/series/narco-wars-c465c738-371b-4ef6-8fac-c0c469d9e9b0

I write in a variety of thriller sub-genres. I’ve written psychological suspense, techno, military, murder, and crime. The only thing they have in common is a fast pace and plenty of tension. I hope readers sign up for my newsletter and try my writing. https://jeffreyjameshiggins.com 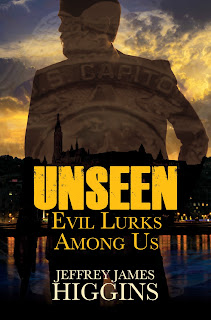 Unseen: Evil Lurks Among Us

Rookie Homicide Detective Malachi Wolf investigates a string of murders in Washington, DC and uncovers both a vigilante killer and a terrorist conspiracy—making himself a target. It’s Dexter meets Homeland.

After his father’s murder, Malachi abandoned his economics doctorate to become a police officer and protect the innocent. Now, he must solve his first homicide to prove himself worthy of the badge.

Austin grew up in a strict religious home, with an abusive father who taught him to solve problems with violence, so when Austin’s his girlfriend is murdered by an Islamist infiltrator, he seeks revenge.

The body count grows as Malachi hunts a brutal assassin and unearths a sinister scheme that threatens the country. The former academic seeking justice and a vigilante set on revenge travel on a collision course—two men fighting evil by different means. Can Malachi stop the murders and expose the plot before the streets run with blood?