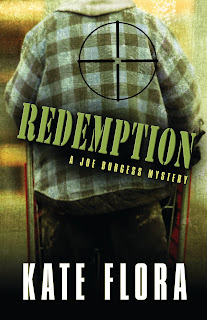 On Thursdays travel editor Serena Brower or one of her guests usually takes us on a virtual tour of some exotic vacation spot. Today we have something a bit different from mystery author Kate Flora. Kate’s twelve books include seven Thea Kozak mysteries, two police procedurals, a suspense thriller written as Katharine Clark, and a true crime, Finding Amy, which was a 2007 Edgar nominee and has been optioned for a movie. Her current projects include Death Dealer, a true crime involving a Canadian serial killer, a screenplay, and a novel in linked stories. Flora’s short stories have appeared in numerous anthologies. Her third Joe Burgess police procedural, Redemption, will be published in March 2012. Read more about Kate at her website. -- AP
Oh, the places you’ll go . . .
Mostly when we write about our travels, we’re talking about exotic locales and intriguing landscapes. Gorgeous beaches with sugar-white sands or the Golden Gate Bridge swathed in fog that’s illuminated a brilliant gold by the setting sun. The settings mystery writers find themselves in, in the interest of doing good research, are often very different and far less glamorous. 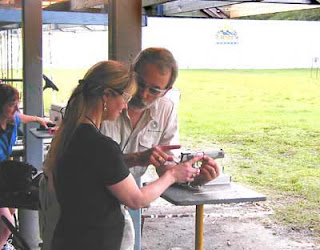 It’s a gray, chilly day in Florida, and I’ve just gotten off a bus in a stretch of flat, empty land west of Ft. Lauderdale. It’s a chance to shoot guns arranged as part of the Florida MWA’s mystery writing conference, Sleuthfest, and my travel companions include the wife of the incomparable Connecticut forensic expert, Dr. Henry Lee. In a slow line, we enter a squat cinderblock building where we are handed earplugs and safety glasses. Then we file out the other side, where an overhanging porch is lined with shooting stations. In front of us are rows of targets. And some of the NRAs best instructors are waiting to help us choose guns and learn to fire them.
This is not a place I ever expected I’d be, nor a thing I ever expected to do. But the world of crime is also the world of guns, and I’m planning to write a police procedural. There is an awesome array of firepower here, but I’m a timid sort, and smallish. I want something that will fit in my hand and won’t have too much kickback or muzzle-flash. Carefully coached by my expert, I choose a gun and manage to do a respectable job of killing my target, even though I’m terrified every time I pull the trigger. Then we go inside, turn in our gear, and eat barbecue, beans and cornbread. Mystery writers are the best, and we’re all excited about the opportunity we’ve just had. And when my character, Thea Kozak, fires a gun in Liberty or Death, I will know what she’s experiencing.
When I started writing mysteries, I thought what a writer did was sit at her desk and imagine. Now I am driving around in the dark, on the back streets of a small New England city with a population that’s in flux from white working class to immigrants from many nations. My guide for the evening is older, beefy, and garrulous. As we poke through the parking lots of industrial buildings and circle a fabulous gym complex where the Celtics train, I’m asking, “What are you seeing?” and other questions to guide me in creating a credible cop. Suddenly, he says, “Lately, I’ve started noticing women…” and the conversation heads in a strange and somewhat uncomfortable direction. Another night, another cop, another state and another city, the streets fall quiet around us as the hour grows late, and we talk about the intersection of Catholicism and the draw toward police work.
The conversations are amazing, and strangely intimate, and I know that I am being given the gift of their confidence. I don’t know if they know how much they are teaching me, or how important it will be to my writing. 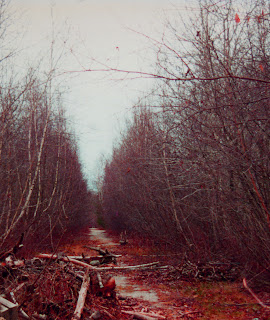 It’s a warm October day when I leave home for my rendezvous in Portland, Maine, with the police lieutenant who is going to walk me to the crime scene in the true crime, Finding Amy, that we are writing. As I drive, the sky goes gray as a fogbank rolls in, and the temperature plummets. Glad that I am early, I detour to the local Goodwill and buy a warm jacket. Then we meet up. And as the afternoon deepens into darker and darker gray, and at the same time of year that Amy St. Laurent disappeared, we park at the end of a crumbling tar track heading deep into the woods, the way blocked by piles of debris, and head toward the spot where her body was buried., As I walk where she walked and approach the spot where she probably died, the woods are dark, quiet, and gloomy. This time, I’m traveling to the dark side of the imagination as I stand and stare at the gravesite, still visible two years later. A hard, but important set of images to carry back to my desk.
The book I’m finishing, Death Dealer, is also a true crime, and the body was found off an ATV trail deep in the Canadian woods. I’ve told the detective I’ve been interviewing that on my wish list would be to travel into the woods on a four-wheeler so I could get a feel for distance, and the complex layout of the trails, and what the site looked like where the body was finally found. He says he’ll take me, and the next thing I know, he’s backing a police four-wheeler out of the garage. Then he backs out another one, and hands me a helmet. Hey, I think, don’t you know? I’m just a timid suburban housewife. But he knows what I’m thinking, and he just grins. He shows me gears, and brakes, suddenly we’re off, driving down the city street to the beginning of the trail system. 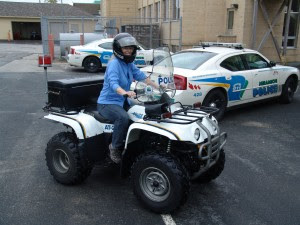 Some time later, I confront a steep bank, and a sharp turn, and I nearly end up in a brook. I think my wrist is broken. I have tears in my eyes from the pain. But here is where a familiar sports expression is useful: no pain, no gain. So I grin and bear it, and drive back to the police station. Because now I’ve been given the tools to imagine it. I’ve seen the gravesite with the tilted cross still decked in fading memorial ribbons. The rusted blue truck body. The sentinel tree. And now, when I write it, perhaps my readers will see it more clearly, too.
I’ve walked through tick-infested fields to watch search and rescue dogs train. I’ve perched on a rock deep in mosquito infested woods, posing as a victim to let the search dogs find me. I’ve stood in old abandoned army training facilities and watched cadaver dogs search. I’ve been shut in a morgue cooler after a playful medical examiner closed the door and shut off the lights. These are not places I ever expected to go.
I’m standing on the waterfront in Portland, the shrill of seagulls overhead, the slosh of waves around the pilings of the wharf under my feet. Out in the channel, big gleaming red tugboats are steaming past. Then a Portland fireboat. Boats rock at their moorings, the rigging on sailboats clangs. The scent of the sea is strong. Refreshing, not unpleasant. And I’m gazing down into the churning water, imagining a floating body down there among the clusters of dark green seaweed. I’m getting ready to write Redemption.
Booklist review of Redemption:
When Detective Sergeant Joe Burgess of the Portland (Maine) Police Department finds his friend Reggie Libby drowned in the harbor, he is determined to bring the killer to justice. Reggie, a Vietnam vet who was mentally ill and had fallen on hard times, had apparently started a new job recently. Joe and his colleagues work to determine his place of employment and his movements before his death by interviewing Reggie’s fellow street people and his relatives, including his vindictive former wife and indifferent son. On the home front, Joe’s live-in girlfriend wants to adopt two foster children, and Joe doesn’t feel ready to be a parent. As always, Joe immerses himself in his case, causing problems in his personal life. Framed by the challenges street people face in large cities, this compelling, fast-paced police procedural offers a complex plot, rich with details of conducting a murder investigation and insight into the rigors of the cop’s life. — Sue O'Brien
Thank you, Kate, for a fascinating look into author research and places none of us will want to add to our vacation wish list!


Readers, don't forget to post a comment to enter the drawing for a book from our Book Club Friday guest author tomorrow. -- AP
Posted by ANASTASIA POLLACK at Wednesday, February 22, 2012

Kate is on a never-ending research quest. She and I once rode together to speak at a public library, in Vermont, I think, and she interrogated me all the way there - Why do cops do this? Why that?

That's why her details are so "on the money."

Doing research gives the writer a glimpse into places and jobs the reader might not have access to. It's those details that make the stories come alive. I worked as a private detective years ago and love to drop tidbits into my stories. Kate's mention of how the all-terrain vehicle hurt her hand was spot on.

Wow, this is truly field research and definitely gives the book that element of authenticity. Love this post!

Wonderful to read about your research, and very sobering. Of course, that's what helps your books to resonate so :)

Excellent post, Kate. I could really picture the places you described. Scary stuff in the name of research!