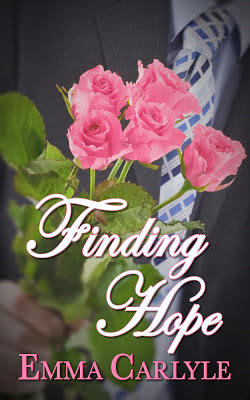 Hope Morgan, heroine of Finding Hope by author Emma Carlyle (otherwise known as Lois Winston) stops by to give Cloris a break today. Some men should never set foot in a kitchen. Ben Schaffer, the hero of Finding Hope is one of them, as evidenced by his attempts at a pancake breakfast for his three-year-old triplets. -- AP

Who would have thought making pancakes could be this difficult -- and messy? Ben stared at the fall-out. The boys, spattered from head to toe with raw batter, held their collective breaths, no doubt waiting for him to explode. And although the thought had crossed his mind -- and he might benefit from the release -- he wasn’t about to blow up in front of his children. Instead, he shook his own batter-dappled head and tossed what remained of the blender-chewed rubber spatula into the sink. Throwing his arms up in defeat, he turned to the boys and asked, “Who wants breakfast at McDonald’s?”

A chorus of me’s answered him.

“Well, we can’t go looking like this,” he said. “To the showers, men.” He lifted the boys one-by-one off the kitchen counter and was about to lead them up the back stairs when the front doorbell rang. “Don’t move, and don’t touch anything,” he warned them, heading for the door. As it was, he faced a massive clean-up, but at least the mess was presently contained to one room. Ben wanted it to stay that way.

“Coming,” he yelled as the bell chimed a second time. When he swung open the heavy oak door, he was surprised at first to see Hope standing on his front porch. “Oh, the car,” he said, half mumbling to himself. “I forgot.”

Ben followed her gaze, from his T-shirt to his hands, and then his jeans. After the spatula had caught in the blender and spewed pancake batter in all directions, he had attended to the boys. Only after he viewed himself through Hope’s eyes did he realize how extensively he, too, was covered in flour and raw pancake mix.

He picked at a clump of batter drying on his chin. Damn stuff felt like caked mud. “No, come in. I need to get us all cleaned-up, though.”

“Have a visit from the Ghostbusters?” she asked, following him back to the kitchen.

“Certain people should never be allowed in kitchens,” he told her. “I’m one of them.”

“I’ll say!” He watched as her large hazel eyes grew even larger, ogling first the boys, then the kitchen. “What happened?”

Poor Ben has his hands full. His wife has walked out on him, and his housekeeper lands in the hospital. Hope Morgan, the resourceful heroine of Finding Hope, saves the day in this heartwarming and funny romance about second chances at love.

For a limited time, Finding Hope is available on Kindle for only .99.

Coat skillet with vegetable oil and preheat. Using 1/4 cup batter for each pancake, cook on one side until bubbles form. Flip to cook second side. Continue cooking pancakes until golden brown.

Such a cute excerpt!

Will have to save the pancake recipe for my husband--he's the cook. Total opposite of Ben, right? I'm much more likely to do a stunt like Ben than my DH. Ha.

Lynda, I enjoy cooking, but I'm probably the sloppiest cook in the world!

as long as the pancakes taste good..a little mess is surely a sign of creativity...

LOL, Mareva! That's the way I'll look at it from now on.