Back for a return visit today is F.M. Meredith, also known as Marilyn Meredith, the author of the Deputy Tempe Crabtree series. She first became interested in writing about law enforcement when she lived in a neighborhood filled with police officers and their families. Her interest was fanned when her daughter married a police officer and the tradition has continued with a grandson and grandson-in-law who are deputies. She’s also serves on the board of the Public Safety Writers Association, and has many friends in different law enforcement fields. Learn more about F.M. at her website and blog.

F.M. is in the middle of a blog tour and is running a contest. The person who comments on the most blog posts on her tour may have a character named after him or her in the next Rocky Bluff P.D. crime novel or choose a book from the previous titles in the Rocky Bluff P.D. series in either paper or for Kindle. Check her website for the tour schedule. -- AP 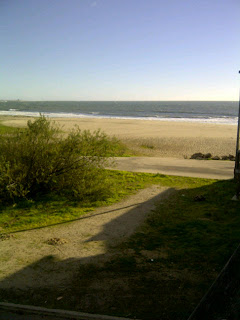 Why I Chose a Fictional Setting for my Rocky Bluff P.D. Mystery Series


The Rocky Bluff P.D. series could be described as a police procedural, but it is more than that because I wanted to show as much about the families of the police officers and how what went on with them affected the job the officers had to do, and what went on at work affected the families. It is a bit softer than most police procedurals in that my characters may cuss and swear but I don’t put it into words.

When planning the first book, Final Respects, I knew I wanted the story to be in a small town, but not a real one. I wanted a town I could create and wouldn’t have to worry about mentioning businesses or restaurants that went out of business by the time the book was published.

At the time I lived in a small beach community on the coast of California near Ventura. Since I knew what it was like I decided to create a town on the coast. I put it north of Ventura and south of Santa Barbara, but in Ventura County. There is no such town like it.

The town is right on the beach, with low income cottages on the streets leading to the beach that were built in the 1930s for vacation spots.  The main street is Valley Boulevard where most of the business  are, including the diner where many of the officers like to grab a quick bite, and a Chinese restaurant that is upstairs over a Mexican place.

Most of the residences are located on the sloping hillside. The freeway dissects the city and on the other side are orange groves and ranches.

The town gets its name from the bluff that rises on the north side of the town. The most expensive homes in the area are located atop the bluff along with the Rocky Bluff Community Church. There are other churches in town, but the only one with a larger congregation is the Catholic church. Different churches have played major parts in some of the previous books.

In my mind, I can see this town as clearly as any I’ve ever lived in. I can hear the waves rolling in and smell the salty ocean spray. I experience the fog that comes in and often envelopes everything. I know the beach cottages, some of them well kept, but most of them in stages of disrepair. I can see the different styles of houses dotting the hill, some more modern, others built in an earlier era like Detective Doug Milligan’s small Victorian. I know what each house looks like where my characters live.

I hope when you read Dangerous Impulses you’ll come away knowing more about Rocky Bluff and the people who populate it.

Dangerous Impulses
An attractive new-hire captivates Officer Gordon Butler, Officer Felix Zachary’s wife Wendy is befuddled by her new baby, Ryan and Barbara Strickland receive unsettling news about her pregnancy, while the bloody murder of a mother and her son and an unidentified drug that sickens teenaged partiers jolts the Rocky Bluff P.D.

I love your attention to detail. As a reader, that makes the story better for me. As I writer, I love adding details.

Thank you for having me today. I am thrilled to be here.

And Rose, I'm so glad you stopped by.

Marilyn,
I love the setting for your mystery series. After reading several of your books, it's hard for me to believe that Rocky Bluff is a fictional town. It's obvious that it's real to you because you make it come alive for your readers. I'm looking forward to reading "Dangerous Impulses."

I love fictional seaside towns, especially when they are featured in an entire series. The reader in me gets lost in that added element of escapism, while my internal writer says, "it's fun to build a world and populate it with characters"...

Good luck with your stories.

Patrica, I'm so glad you visited me.

And Gemma, I do hope you'll sample one of my Rocky Bluff P.D. mysteries. It's on the cozy side.

Marilyn, Rose and all other talented cozy mystery writers - thanks! I love a good cozy; like your settings; and if it's a series - ah! My bookshelf runneth over 8-)
Cyber hugs and good reading and good sales to all of us,
Jackie Griffey
(Maryvale series & 2 others - see list on Amazon.com 8-)

We did the same thing with Aspen Grove, Colorado for our sweet romance anthologies. I love it when we get the kind of comments you got above. Our readers want to visit our town. I love Rocky Bluff!

Hi, Jackie, I think we sat next to each other at a Bouchercon book signing eons again, and giggled a lot.

Lorna, thanks for stopping by, dear friend.

You do such a great job with setting that it makes the reader feel like they're right there, with your characters. Love fictional towns because you can do anything you want with them.
Marja McGraw

Hi, Marja. Yes you can do anything you want with a fictional town as long as you remember where everything is. Ha!

I always travel looking for your "fictional towns" believe have spotted a couple of near composites. Your stories always feel real.

Jake, any small beach community off the 101 might substitute for Rocky Bluff. A California mountain community with a river running through it could sub for Bear Creek.