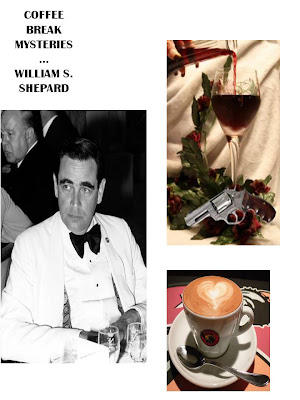 Prize-winning mystery writer William S. Shepard writes the Diplomatic Mystery series, mirroring his own career in the Foreign Service. He is also the author of two collections of short stories that feature amateur sleuth Crusher Davis, a former football player who now writes the “Ask Martha” advice column for a local newspaper. Read more about William and his books at his website.

When I first heard about “Ask Martha,” I thought it would be cool to interview her, but as you can see, the interview didn’t go exactly as planned—AP 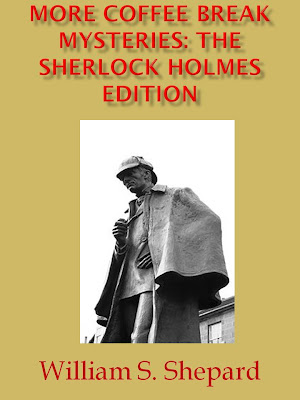 Anastasia: Excuse me, but I thought that this was the desk of the columnist who writes “Ask Martha.”

Martha: It is. I guess that I didn’t fit your mental image. Most readers don’t know that I am 6 foot six, 265 pounds, and decidedly male!

Anastasia: Why are you writing the “Ask Martha” column for the Chronicle? I mean, when I started to research this column for American Woman magazine about “Up and Coming Women Reporters and Editors,” you were not exactly what I had in mind. What’s your real name, by the way?

Martha: Locally I’m known as “Crusher” Davis. I got that name from my football playing days.

Anastasia: What on earth are you doing writing an advice column?

Martha: It’s a job. Matter of fact, it was the only job at the Chronicle when I started some six months ago. Since then, the Business Editor slot opened up, and my Editor, James Carstairs, picked me for that job. But the advice column is something that I really enjoy. Since I was a kid, people have confided in me. They still do. That’s the quality that Carstairs was looking for when he interviewed me for the job. But he did say that he wondered if I’d be accepted writing the advice column under my own name. So we kind of together came up with the idea that I’d write under the “Ask Martha” pen name.

I should have mentioned that the original “Ask Martha” really was named Martha, and she wrote the column for years and years. When she left for Arizona, the job was open. People kind of assume that she may be still on the job. But I hope not. I think that I give better advice! Anyway, it’s a good use of my Journalism major.

Anastasia: Just how do you keep your cover? I should think that your readers would easily figure out who really writes the “Ask Martha” column.

Martha: It’s all done by the column. People read it and send email replies and comments. And in a small town, people do tell you the darndest things. So mostly, Martha never interviews people. Advice columnists don’t, as a rule, as you know. When I have to do an interview, it can be in my Business Editor guise. But often, what I hear from readers in answer to the questions that I ask them is helpful in solving our local mysteries.

Anastasia: Doesn’t all this annoy the police?

Martha: Not in the least. As a matter of fact, Inspector Samuels of the Centerville Police says I’m a great help. He is understaffed, to put it mildly. What the town can allocate for the police budget is simply inadequate. He even had to let a patrolman go, for lack of funds. Samuels just doesn’t have time to thoroughly analyze every case. So he shares some of the puzzling ones with me. When he does, I take it from there. It’s all OK, and Samuels gets the credit, which he deserves.

Anastasia: As you may have heard, I’m an amateur sleuth myself. Since we’re in the same detecting business, so to speak, we have that in common. Tell me about some of your cases.

Martha: Crime with a small town focus, about sums it up. I haven’t had any murder cases, or aggravated violence, and hope that I never do. But theft, shoplifting, arson, embezzlement, and stolen identity, those are actual crimes that I’ve solved.

Anastasia: Have they been written down, for crime readers to enjoy?

Martha: Why yes, and to my surprise, my efforts have gathered something of a readership. That’s quite interesting, considering I share the billing in two collections of short mysteries, “Coffee Break Mysteries” and “More Coffee Break Mysteries: The Sherlock Holmes Edition,” with other sleuths, including Holmes himself!

Anastasia: This has been most interesting, even if you don’t quite fit the topic I had in mind.

Martha: But the character does. If I can be a believable Martha, think of how a real one would prosper writing an advice column, and solving the odd crime or two as she does!

Anastasia: Agreed. Thank you so much for your time. I’ll keep your real identity a secret ... between us girls?

Coffee Break Mysteries is a collection of twenty short mysteries, from shoplifting to murder. Each mystery is set forth for the reader to solve, with clues and several suspects. The reader solves the mystery, then turns to the next page for the solution.
Buy Link

More Coffee Break Mysteries: The Sherlock Holmes Edition is a collection of twenty short mysteries, ranging from blackmail to murder. Each mystery is set forth for the reader to solve, with clues and suspects. The reader solves the mystery, then turns to the next page for the solution.
Buy Link
Posted by ANASTASIA POLLACK at Wednesday, April 17, 2013

The column was great fun - I'll have to tell Martha that it is up!
Bill Shepard

What fun! And you've written it in such a way that I saw you stand there in front of Martha's desk, interviewing "her." What an inventive crowd we writers are!
Rayne

Thanks for your comment. I should mention that a new Ebook, "The Master Detective Trio," has both Coffee Break books PLUS "The Great Detectives," for less than the price of two ebooks! Just published, for Ask Martha fans!

Glad you enjoyed the column. I should add that both of the Coffee Break Ebooks are now available in "The Master Detective Trio," together with "The Great Detectives," three books for less than the price of two!

Oh, I think I'd like "Martha." He sounds like a lot of fun! And, interesting enough, I've often found men to be much better listeners than the real Martha's of the world.

Thanks for your comments. "Martha" is definitely a good listener, and will take note!
William Shepard