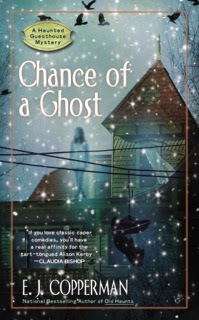 E.J. Copperman is the author of the Haunted Guesthouse mystery series, whose fourth novel Chance of a Ghost was recently published. Other titles in the series include Night of the Living Deed, An Uninvited Ghost and Old Haunts. Learn more about E.J. and his books at his website. -- AP

“I hate writing; I love having written.”—attributed to just about every author ever

I write almost every day. That is, I write fiction almost every day. Other times, I write non-fiction or grocery lists or blog posts, or something, but I devote at least part of most days to the creation of some completely made-up story or another. Quite often, that involves working on the Haunted Guesthouse mystery series in which Alison Kerby has purchased a Jersey Shore Victorian to turn into a guesthouse, only to discover it is inhabited by its previous owner and a private detective, which would be trouble enough, except that they’re both dead.

When a Haunted Guesthouse book deadline is not looming—as one is not now, for a couple of months, anyway—I devote myself to other stories, some of which are proposals for more mystery series that might or might not happen, while others are “standalones,” one-off stories not meant to launch anything other than a reader’s interest for the course of one book, if possible.

Each novel or short story consists of a plot idea to get it going, characters to populate it who must at the very least be interesting, dialogue that should sound like people talking, a few memorable scenes for readers to, um, remember, and various other elements. All of these carry with them certain levels of difficulty for the writer, and they vary from writer to writer depending on one’s inherited gifts. I’m pretty good at dialogue and I like characters, so I don’t worry too hard about those.

But I absolutely hate giving my characters names.

Don’t get me wrong; I don’t think these imaginary people should run around without the benefit of an identifier. I don’t want them to have to tolerate being called “hey, you” or “Number 642” or anything like that. I agree the characters should have names, but the fact remains that I would pay cash money—if I had any—to someone who could come up with believable monikers for the walking, talking figments of my imagination who populate these tales.

I would change every single name I’ve given every single character in every single story I’ve ever written. Except that then I’d have to name them again, and I’d only want to change those names, too.

The usual M.O. is that I hit that moment where a character needs to stop being “the guy with the red hat” and take the plunge into personhood in my head. That requires a name. I knew this was coming, so I take a deep breath (and possibly a Tums) and sit there gazing stupefied at my office for the better part of ten minutes with absolutely nothing resembling a thought in my head. Honest, for those periods of time, I could be classified as a form of plant life.

I stare at the spines of books on my office shelves, but let’s face it, the names on those would have been used up years ago, since I don’t have that much room for books on my office shelves.  Besides, they’re generally names of other authors, and how would that look? So I give that up and look around at objects in the office to see if those will suffice. Charlie Fax Machine? Too ethnic. Joanne Souvenir-Baseball-Autographed-by-Graig-Nettles? A little cumbersome.

Finally, I close my eyes (you’d think I’d have enough experience to just skip to this step, but no) and try to come up with sounds that could be name-like. K-k-k-Karen? Maybe. The character’s a man, but I can work around that—I have a name I don’t hate! Now she (because now it’s a “she”) needs a last name; dammit! (No, “Karen Dammit” doesn’t sound good, and some people get touchy about stuff like that.)

I’ll stick it in there with the promise to myself that this is only temporary, a placeholder, and I’ll come back and fix it another day. Which never comes.

Karen Malone it is.

Wait—I haven’t used that one yet! I’m saving this name—there’ll probably be a character coming up I could saddle with it.

Temporarily, of course. I’ll change it in revisions.

Chance of a Ghost, the fourth novel in the Haunted Guesthouse mystery series, takes a more personal approach: This time Alison Kerby is searching for a ghost close to her heart, her departed father who has been mysteriously absent from his ghost-seeing daughter's life. There's a chance she might find him now--but she'll have to solve another ghost's murder before she can.

Lovely interview! I love this series :0)

LOL. Great interview. I've not read any of the books, but they sound quite interesting. :)

I actually love naming characters ;-D I probably waste too much time playing around with names, but I find that the character comes into focus as I try out one name, then another.... I go through baby name books (esp the Beyond Jason and Jennifer series), and Behind the Name is a valuable on-line resource.http://www.behindthename.com/
Fun interview and a fun series!

Wow, did I recognize myself in this post. Baby name websites are my friend! I write historicals so add in the limiters of staying time period and ethnically correct. Arg. I look through my cast of characters, pick out a letter out the alphabet I haven't started a name with yet, and begin the search.

DMac, you could probably make a nice living selling your services to other authors!

E.J. Copperman, you made me laugh with this interview -- names can be the devil.

What with needing to give readers a memorable moniker to hang on to, as well as hitting on a name that appropriately captures the character's persona -- would Encyclopedia Smith have the same oomph as Encyclopedia Brown? Nancy Mason? Perry Drew? Dumbledore for Gandalf, or vice versa? -- it would be nice if we could all capture the essence (genre-appropriate) of J.K. Rowling's naming talent.

I collect names everywhere I go. If I hear a unique surname or a combination of names, I jot it down. Since I'm a historical author, cemeteries are a great source of period names.

I agree--naming characters is a pain. Without going the obvious Dickens route, the names have to subtly fit the characters. (A minor villain in one of my books, for example, just had to be called "Ray Hacker.") For a book I'm working on now, I have a rather flamboyant villain and wanted a somewhat stagey name, but he's so nasty that I didn't want to use anybody's REAL name. So I searched different combinations of first and last names on the web, and finally came up with something that seemed to fit him but also ought not to get me sued!