Lise McClendon is the author of 11 mysteries and thrillers, and also writes as Rory Tate. Her latest release is The Girl in the Empty Dress, now available in print and e-book, at all major retailers.Learn more about her and her books at her website.

Novelist, Take Me Away

Does setting matter? As a writer and reader I enjoy the “take-me-away” aspect of new and different places in fiction. Off to a foreign land without all the inconveniences of travel. I’ve used settings as far away as Moldova but my two novels set in France are close to my heart.

The books feature Americans, but they rely as much on their setting as almost anything else. Far from the stylish boulevards of Paris and the sunny beaches of the Côte d’Azur, their setting is the Dordogne province, originally called the Perigord. This southwestern region is a fertile land known for its wine, foie gras, duck confit, and black truffles. Its back roads wind through deep canyons, with villages clinging to cliffs. Here the Hundred Years War was fought and Nazis laid waste to the land. Remnants of war and violence remain.

Much of the first book, Blackbird Fly, is centered around small village life. In the second book, the Bennett sisters, all five lawyers, take on a walking tour of the Dordogne. Merle Bennett, the middle sister, is turning fifty. The “girl” in the title of the sequel, The Girl in the Empty Dress, is a law colleague of one sister. Rude and demanding, her secrets become the key to unraveling several mysteries.

History really comes alive in these old places where the ‘bastide’ walls are still solid after 800 years. But the delicacies of this area are the real delights. Black Perigord truffles are famous around the world. Difficult to harvest, they are becoming scarcer as climate change alters their natural habitat in these sunny hills and valleys.

Dogs are often trained today to hunt truffles. A highly trained truffle dog is very valuable to any truffle hunter. In The Girl in the Empty Dress the women come across an injured dog in a ditch. This dog, they soon find out, is famous for its truffling exploits. How it got to be injured and out on its own sets off the mystery.

I went on a French walking tour myself. Six women, a love of wine and cheese, and winding trails through the vineyards made for a fabulous time. Later I saw a “Sixty Minutes” story on truffles. They interviewed a dog owner who had his prized truffle dog stolen. He searched for years in vain for her. I decided to write about a stolen truffle dog. In trying to plot the story, the walking tour came back to me. The dynamics of a small group are always interesting. The sixth wheel, the woman who is secretive and annoying, sets up the conflict. As a writer, once you come up with the central conflict you’re off to the races. 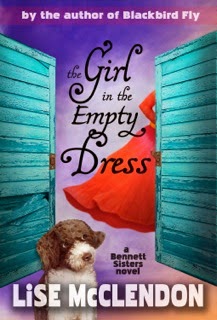 The Girl in the Empty Dress
Merle Bennett is spending another summer in France, vacationing with her four sisters, tramping around the back roads of the Dordogne. The sixth member of the tour is a law colleague, Gillian Sargent. When Gillian finds an injured dog along the roadside and wants to keep it for her own, the idyllic summer trip of sisterly bonding and wine drinking turns dark and dangerous. In this corner of southwest France of dark, oaky wine, rocky hills, and earthy truffles, Merle must juggle sibling bickering, her teenage son, two boyfriends, and the law. All she wants is to unwind in the golden light of France. But France has a few tricks up its sleeves again. Thanks to a sad little dog and a woman with too many secrets.

This book sounds like just my cup of tea, Lise! I'm off to check it out.

Thanks for having me here, ladies!

I love reading books that take place in France. Your photos are lovely so I'm off to check them out right now.

I'm a sucker for mysteries set in France. I'll check it out.

I'm re-reading BLACKBIRD FLY before I buy your new book! I've also requested it at our public library so others can enjoy the series! Thanks for taking me on a mini vacation in France!