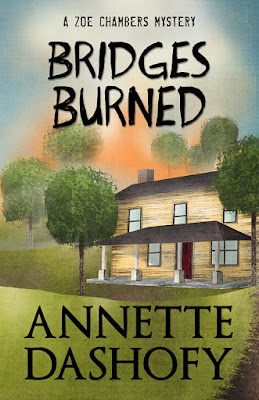 Today mystery author Annette Dashofy sits down with us for an interview. Learn more about Annette and her books at her website and blog.

When did you realize you wanted to write novels?
When I was in high school, I started writing “novels” longhand in spiral-bound notebooks. I’d write a chapter or two and pass it around in study hall to my “fans” who would take their turns reading it before returning it to me with orders to “write more!” Now, there’s a term for what I wrote: Fan Fiction. Then it was simply inserting a character who was basically ME into a story involving my favorite television shows at the time. Recently, while cleaning out my mom’s basement, I found a binder with three of those early “novels” written when I was 13!

How long did it take you to realize your dream of publication?
I’m not counting those teenaged efforts! I got serious about writing for publication in 2004. From then, it took about 10 years for it to really happen.

Where do you write?
Mostly I write in my home office, but when I travel, a hotel room does nicely. And my hubby and I have a “fishing/writing camp” on the Youghiogheny River. He fishes. I write. That’s probably my most productive writing location.

How much of your plots and characters are drawn from real life? From your life in particular?
I often get ideas from local news stories, but then I “corrupt” them into something completely different. A few story lines have been inspired by family folklore-type tales or stupid stuff that’s happened, but they’re just a seed from which to start. As for my characters, I use some real-life experiences. For instance, I have worked as an EMT on a small-town ambulance service. I own cats (or they own me) and have owned horses. However, that’s the extend of similarities between me and Zoe. We have totally different family backgrounds.

Describe your process for naming your character?
I like to use local names for characters, but I mix and match a lot. Pete Adams for example: Pete was the name of a local police chief, who passed away years ago and who was also a dear friend of my dad. Adams was the last name of the minister who married my husband and me. I like to walk through a local cemetery and pick names from tombstones, too.

Real settings or fictional towns?
Both. Monongahela County and Vance Township are fictionalized versions of southwestern Pennsylvania. Folks recognize aspects of the places I write about, but as with names, I like to mix things up. If I relocated stores and roads, or mashed together different police jurisdictions the way I do without fictionalizing it, all my neighbors and police friends would be calling FOUL! I do occasionally mention Pittsburgh and other real settings, though. Pete takes Zoe out to dinner in Pittsburgh’s Strip District, for example. It’s a real place, but I fictionalized the name of the restaurant.

What’s the quirkiest quirk one of your characters has?
Although Zoe works as a deputy coroner, she can’t stand the smell of autopsy. Not really a quirk for the average person, but for someone who’s considering a future in the Coroner’s Office, it’s a problem!

What’s your quirkiest quirk?
I’m not sure I want to share that! I will confess to loving old Westerns with a passion. I own a lot of them on DVD and love to binge watch.

If you could have written any book (one that someone else has already written,) which one would it be? Why?
Oh… Just about any of Julia Spencer-Fleming’s novels. I love her writing and have always said I want to write like her when I grow up. I love how she writes setting. And I love how 3-dimensional all her characters are.

Everyone at some point wishes for a do-over. What’s yours?
Forgive me if I channel Frank Sinatra for a moment, but as for regrets, I’ve had too few to mention. I do sometimes wonder what if I’d made a different choice… But I’m really happy with my life as is right now, and I don’t know if a do-over would have made it any better.

You’re stranded on a deserted island. What are your three must-haves?
My husband and a knife (because he’s a pseudo-MacGyver and could build a shelter and catch food as long as he has a knife!) and the latest Craig Johnson novel (which I could read over and over while Hubby builds the shelter and catches the food).

What was the worst job you’ve ever held?
I once worked at a kiosk in a mall where I sold cheap jewelry and pierced ears. I hated it. I hated piercing little kids’ ears and making them cry. Plus after you do one side, it’s really hard to get them to sit still for the second one because NOW they know what’s coming!

What’s the best book you’ve ever read?
From previous answers, you can probably guess I’m a huge Julia Spencer Fleming and Craig Johnson fan. It would have to be one of theirs, but narrowing it down to one is HARD. I think I’ll go with Johnson’s Kindness Goes Unpunished, although if you asked me the same question on another day, I’d probably give you different answer.

What’s on the horizon for you?
I’m currently completing With a Vengeance, the fourth book in the Zoe Chambers mystery series and noodling with ideas for the fifth one!

Anything else you’d like to tell us about yourself and/or your books?
I’m thrilled that Circle of Influence was nominated for an Agatha for Best First Novel, and I’m also tickled that it’s recently been nominated for the David Award for Best Novel of 2014. Truly a dream come true!

Bridges Burned
Paramedic Zoe Chambers is used to saving lives, but when she stops a man from running into a raging inferno in a futile attempt to rescue his wife, Zoe finds herself drawn to him, and even more so to his ten-year-old daughter. She invites them both to live at the farm while the grieving widower picks up the pieces of his life.

Vance Township Police Chief Pete Adams, of course, is not happy with this setup, especially when he finds evidence implicating Zoe's new houseguest in murder times two. When Zoe ignores Pete's dire warnings, she runs the very real chance of burning one too many bridges, losing everything--and everyone--she holds dear.

Thanks for having me here today! Great questions!

Enjoyed your interview with my morning coffee, Annette.

This is fantastic! I thought I knew most everything about you, Annette, but wait there's more. Oh, I would have lasted two seconds at the piercing ears job. And I'm not surprised at all about Craig Johnson. I was in stitches when we read the Owl story on my patio when you and Ray came to visit. So pleased for your success!

Donnell, I just re-read Craig's owl story last week and laughed just as hard! That was a fun visit. Must do it again sometime.

I enjoyed your interview. I love Julia Spencer-Fleming's books also. She's a great writer. It was fun to find out more about you, a fellow Pennwriter!

Thanks, Sharon! Glad to see you here!