C. Hope Clark has written six novels in two series, with her latest being Echoes of Edisto, the third in the Edisto Island Mysteries. Mystery continues to excite her as both reader and writer, and she hopes to continue as both for years to come. Hope is also founder of FundsforWriters, chosen by Writer’s Digest Magazine for its 101 Best Websites for Writers. Learn more about Hope and her books at her website.

My mind lives at a particular beach, and my body goes there several times a year – Edisto Beach, at the tip of Edisto Island, an hour south of Charleston, South Carolina. Having grown up within a half hour of the beach, it’s in my blood. When I lay eyes on a massive, five-hundred-year-old oak in all its dangling Spanish moss swaying in humidity-laden breezes. . . when I cross a bridge from the mainland to the island and take in the aroma of pluff mud . . . when white egrets and great blue herons coast on warm sea air with nary an effort . . . then I am where my soul needs to be.
Edisto Beach is like no other Carolina beach. It’s secluded, almost jungle-like, lacking the neon, franchises, and motels of other beaches that prefer the more commercial flavor. It’s where people cross the McKinley Washington Bridge over the Dawhoo River and leave their worries on the mainland behind them. All of which made for the perfect setting to take my broken character, an ex-big-city detective, freshly widowed with no desire to return to law enforcement. And of course I make crime follow her, or have her the only person able to see it, because, after all, crime doesn’t happen on Edisto. No, ma’am. No, sir.

Echoes of Edisto is book three in a series that coastal South Carolina has come to love, and I almost let Callie Jean Morgan settle in this time and decide she’s found her calling . . . but of course I have to rock those doubts. But that story’s for another time.

When Callie isn’t dealing with the unusual threats that come with island living, she is like everyone else, enjoying the seafood so easily available. And with the easy availability of seafood comes unique and handed-down ways to fix it.

But some folks aren’t into the richer sauces, the fried, or the casserole compilations. Instead they prefer the simple, which is Callie’s preference. Crab and shrimp, mainly, and here are two ways that locals eat these favorites. I’d say they eat these quick-fix dishes because of time constraints, but that’s rarely the issue. Instead, the simplest way to eat seafood is the healthiest and the best tasting, and require nothing special. Plus, you can close your eyes when you taste these recipes, and feel like your feet are in the sand.

(Measurements below are per person in your party)
1 pound of raw shrimp
2 Tbsp butter
Garlic to taste (don’t feel you have to go lightly here)
Salt to taste (but don’t overdo the salt)
Pepper to taste (optional)
1 orange, sliced
1 lemon, sliced

Turn on your oven broiler. Put shrimp on a sheet pan and dot with butter. Sprinkle seasonings. Cover shrimp with orange and lemon slices. Broil until shrimp are pink, stirring often.

Now, let’s go to the crab. You can substitute the type of crab used, but blue crabs are common on the Carolina coast. They are pretty but they aren’t big, so feel free to eat several. As with all seafood, great with beer!

Can of beer
Same amount of water
Same amount of vinegar (apple cider preferred)
Old Bay seasoning to taste
One to two dozen blue crabs (live, please. Just look the other way when you put them in the pot.)

Put three liquids into a stock pot. Place rack into the pot. Put one layer of crab, layer of seasoning, and repeat. Steam 15 minutes or until the crabs turn deep red. 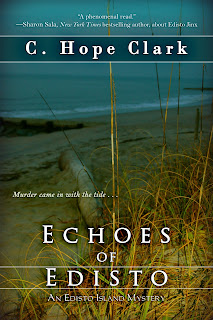 Echoes of Edisto
Murder came in with the tide . . .

Edisto Island is a paradise where people escape from the mainstream world. Yet for newly sworn-in Edisto Police Chief Callie Jean Morgan, the trouble has just begun . . .

When a rookie officer drowns in a freak crash in the marsh, Callie's instincts tell her it wasn't an accident. As suspects and clues mount, Callie's outlandish mother complicates the investigation, and Callie's longtime friendship with Officer Mike Seabrook takes a turn toward something new—but is shadowed by the unsolved mystery of his wife's death. Everyone's past rises to the surface, entangling with death that cuts to the bone.

Gosh, this post made me miss Edisto so badly . . . and crave seafood. I love living on my lake, but dang, I so yearn for my Edisto Beach. Hope y'all like these recipes as much as I do.