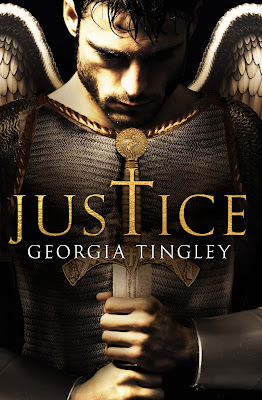 Today we say g’day as we sit down with Australian paranormal thriller, romance, and horror author Georgia Tingley. Learn more about her and her books at her website and blog.

When did you realize you wanted to write novels?
About twenty years ago I wrote a query letter for a romance and sent it to Mills & Boon in the UK. They asked me for the first three chapters. After I sent it, they said it was good but they don’t publish stories about adultery (odd since it’s what I wrote in my query letter) – my fault I didn’t research their guidelines. Anyway, around that same time my marriage broke up and I was a single mother for the next 10 years. I put my writing on the back burner.

How long did it take you to realize your dream of publication?
Twenty years and now only because I self-published. I’d probably still be waiting.

Are you traditionally published, indie published, or a hybrid author?
Indie

Where do you write?
My office is a glorified ‘junk room’ with ironing board, sewing/craft table, sports equipment, bookshelves and winter coats – we’re all squished in here – it’s cozy but cute. I dream of an office with a great view (although I probably wouldn’t get much writing done!)

Is silence golden, or do you need music to write by? What kind?
I’ve tried music but I just end up singing along. I’ve tried music without words, but same deal -- I tap my feet. It’s silence for me. Although when I wrote a scene in my book where there was this wild thunder-storm I did play my iPod which has a compilation of storm sounds. It helped me get in the moment.

How much of your plots and characters are drawn from real life? From your life in particular?
They are inspired by things which I see around me. The plot of my current book came from a TV show. I was in fact, inspired by a true-life story I watched on 48 Hours about a little boy who went missing. His body was found in a vacant lot – hogtied with a gag. His parents hounded the police for years and years. Eventually, they passed away and a female cop opened up the cold-case file and started to ask questions. After some 40 years, someone told the cop that a guy was boasting at a party that he did it. Finally, the suspect, who was now an old man, was questioned and he confessed. He was a neighborhood boy, not much older than the little boy and had even attended his funeral. So heartbreaking. You know, what I find the saddest about it is the utter hopelessness and despair a parent must go through when a child disappears. Many times parents in this situation live a half-life waiting for closure so they can try to move forward in their lives. It was at that point when I thought ‘wouldn’t it be wonderful if there were an angel or superhero who could give the parents closure by finding the lost children, whether they were still alive or dead, and seeking justice for the families?’ And so ‘JUSTICE’ was born.

My main characters have some little idiosyncrasies that I have. But, generally they're from my imagination.

Describe your process for naming your character?
I visualize my characters and then go through a list of names that I think would suit. I have changed names for a few, but the main characters I kept. I’m really drawn to women having nicknames. EG: my female protagonist is Andrea but is called Andi. It just seems more realistic, since people tend to give affectionate names to loved ones.

What’s the quirkiest quirk one of your characters has?
I have a lesser character that everyone seems to love who is an older busy-body. She is a cross between Cyndie Lauper and Angela Landsbury. She’s an elderly lady with pink dyed hair and wears a bright fluorescent jogging suit with equally bright running shoes. In the book I describe it as ‘retina damaging’ clothing. I have another character, the receptionist at the police station who is a big flirt and has some funny one-liners.

What’s your quirkiest quirk?
I chew gum at least once or twice a day and blow bubbles, I drink two glasses of chocolate milk everyday (and have done my entire life), I am a compulsive list maker, I love my bed and go to bed early but read, watch tv, paint my nails, eat, write, talk on the phone, sleep, sex, etc. Needless to say I have an awesome, large bedroom and king-size bed with heaps of pillows. I love beautiful bed linen as well.

If you could have written any book (one that someone else has already written,) which one would it be? Why?
A book by Stephen King – Shawshank Redemption, The Green Mile, The Mist, The Body. I think he is a wonderful writer and really inspired me to write. (although that’s not to say everything he’s ever written is good). George RR Martin’s ‘Game of Thones’ Books. Again, what a brilliant imagination and the stories are fantastic. Although, it seems to me he used history a bit eg: The Lanisters and Starks are probably the War of the Roses – Lancasters and Yorks. The female warrior, Brienne of Tarth might be Joan of Arc?

Everyone at some point wishes for a do-over. What’s yours?
I’d love to do school over but with an adult’s mind and perspective, so I don’t waste my education. I would probably try to work harder at things I am good at and drop the things I struggled with. So instead of being average at most things I would like to be fantastic at some things and crap at others.

What’s your biggest pet peeve?
Rude people. I can’t understand the need for people to treat others like crap. Common decency and courtesy are not too hard to expect.

What was the worst job you’ve ever held?
Housecleaning – some people live like animals. No. That’s too insulting to animals.

What’s the best book you’ve ever read?
Strangely enough I have a favorite that I take out and read every now and again. It’s nothing fancy, no literary awards, no bestseller lists, no thick historical tome that made me question my life choices. No it’s a Harlequin Romance called Together Again by Ruth Jean Dale. I loved it because it starts with a woman who is older, overweight, drunk, divorced, no career, kids etc. absolutely not a role-model to anyone, but somehow she gets her life together. She returns to her hometown, gets into shape and gets together again with her step-brother who she always secretly had a crush on. I just loved it. As a matter of fact, I might pick it up and read it this weekend. It’s been a few years since last time!

Ocean or mountains?
Mountains. I live a short walk from the ocean now and have done for the past 16 years, so it would be nice to live on the side of a mountain with stunning views.

City girl/guy or country girl/guy?
Country. I live in the city now but don’t really take advantage of all the amenities. I love the solitude and beauty of the country. But close enough to a large town so I can go shopping, movies, restaurants etc.

What’s on the horizon for you?
I’m currently writing a contemporary romance, Having Faith, in my series called Mature Love, for women over the age of 35. I’ve also got the next book in the Angel Calling series. I’ve got a horror story, which was originally published as a short story, but I want to lengthen it and publish in the next couple years.

Anything else you’d like to tell us about yourself and/or your books?
I’m a citizen of three countries, India, Canada, and Australia and have lived in these countries, plus England and New Zealand. Although I think of myself as Australian; my children and husband are Aussies.

I do love the ocean, especially swimming and snorkeling, but as I’m getting older and Perth waters are getting more and more dangerous, being the ‘shark attack’ capital of the world, I tend to do my swimming in my pool, doing laps as often as I can.

I look forward to hearing from anyone who has enjoyed my book.

Independence Day, 4th July, 1976 - Thirteen-year-old Christine Conroy mysteriously vanishes from her backyard in a small country town in North Western USA. Folks think Christine has run away to Hollywood as she threatened, but people who know what really happened are determined to hide the truth.

Forty years later, Justice Smith is commissioned to find her body and her murderer - not an easy task after so much time has elapsed. Luckily for him, he has a secret weapon - Justice Smith is a Warrior Angel!

Sent down to Earth to seek justice for those that can't, Justice uncovers a deadly secret - the bodies of several young girls. A serial killer has gone undetected, living among a small community for four decades.

To complicate matters further, Justice has a mortal connection to the prime suspect’s daughter Andi. He finds himself teaming up with an unlikely ally and while working together to uncover the truth, he crosses the boundary to break the heavenly rules for a forbidden love. Will the price he has to pay be too high?