Anne Louise Bannon is an author and journalist who wrote her first novel at age fifteen. She now writes the 1920’s Freddie and Kathy Mysteries, the Operation Quickline series, and the Old Los Angeles series, set in1870. Learn more about her and her books at her website and her wine education blog, OddBallGrape.com, which she runs with her husband.

Nineteenth Century Winemaking
When Maddie Wilcox, the main character in my latest novel, Death of the Zanjero, first started coming to life, I had to figure out who she was and why she’d be there in the dramatic scene where the sluice gate is opened and the Zanjero’s dead body comes floating to the surface.

Just so you know, the Zanjero (pronounced zahn-hair-roe) was the Water Overseer in the city of Los Angeles from it’s founding in 1781 to as late as 1911. During that time, the city’s vineyards and farms were irrigated by a series of ditches, or zanjas (zahn-hah) that had been dug from the Los Angeles River. And there were lots of vineyards. California’s wine industry actually began in Los Angeles in the 1820s (take that, Napa).

Which I found insanely cool, since my husband makes wine at home. So, I had picked a time for my story – the year is 1870, when the city was just starting to civilize. And making Maddie a winemaker was a pretty easy choice. First, that was a lot of what was going on in the pueblo at the time. Second, I’d been looking for a chance to create a character in the wine biz, since my husband and I are so passionate about it. Then there was the added bonus that the research for that part of the story would be a lead-pipe cinch. Winemaking is an ancient practice. Plus, my husband had a recipe for angelica, the version of sherry wine made at the time.

True, wine has always been made pretty much the same way since antiquity. You pick grapes, you crush them, you add yeast and let it happen, then, either press them, or pour the new wine off of the skins into barrels (by the 19th century) and let it age. And wine is still made this way nowadays, albeit with more mechanization and better sanitation and chemistry.

Back in the 19th century, however, things were a little different. For one thing, all that trellising you associate with grape vines today? Nope. They did what’s called head-pruning. They planted each vine in its own little space, but let it grow without supports. You occasionally see it today, where the vines all look like little bushes.

The other thing that surprised me was that they didn’t bottle wine during the 1870s. At least, not in Los Angeles. You filled your own pot or whatever from the winemaker’s barrel, and presumably kept it from getting too much oxygen that way.

Now, they did stomp on grapes in big vats to crush them before fermenting them. But they didn’t press the grapes after they were fermenting like we do now. They poured off what’s called the free-run juice into the aging barrels. The fermented fruit that was left behind was pressed, then juice was distilled into brandy, which was then added back to the wine being used to make angelica. This helped stabilize the wine so it didn’t go bad.

Granted, some of this we already knew, like the head-pruning thing, and how to make angelica. We’d gotten the recipe from Deborah Hall of Gypsy Canyon, who researched it when she’d found a whole bunch of neglected vines from probably the 1890s on her property. Watch the video.

But the actual process of winemaking, believe it or not, was pretty tough to find. Everybody at the time knew how to make wine, so why write it down? A librarian at the Wine Industry Archives at California State Polytechnic, Pomona, had to dig up the actual process for me. And it was from the tourist literature.

So, the research turned out not to be so easy, but it was fun. And being a winemaker made it perfectly logical for Maddie to be watching as the Zanjero’s men opened the sluice gate to the zanja feeding her vineyards. 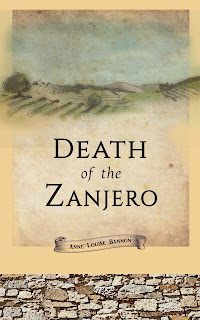 In Los Angeles in 1870, life was cheap and water could cost you everything. When the body of the Zanjero, or water overseer, Bert Rivers, floats up out of the irrigation ditch, or zanja, winemaker and healing woman Maddie Wilcox finds herself defending the town's most notorious madam. To save the one person she knows is innocent (at least, of the murder), she must find out who killed Mr. Rivers, a chase that will tax her intellect, her soul and her very belief in humanity before she's done.

Buy Link
Posted by ANASTASIA POLLACK at Monday, May 14, 2018

"Fermenting Grapes on their Way to Becoming Wine" -- Wow!

Thanks for the thought, Angela. It is pretty fun.