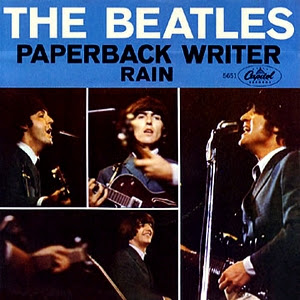 On this day in 1966 the Beatles released “Paperback Writer”. As the protagonist of a paperback series, I know that my author, Lois Winston, has a special attachment to this song. Lois wrote for ten years before she sold her first book, Talk Gertie to Me, a humorous novel about a crafty Iowa mother, her rebellious daughter, and the daughter’s imaginary friend.

Throughout those ten years, Lois received plenty of positive feedback, won writing contests, and landed an agent, but she was never offered a book contract. She’d receive rejection letters that praised her writing, her story, and her characters but would end with, “but ultimately I didn’t fall in love with the book, and for that reason, I must pass on it.”  How frustrating, right? Her agent never asked any of these editors to marry her book, just publish it!

But finally, after a decade-long gestation period, Lois’s dream of becoming a paperback writer finally came true when she was offered a publishing contract for Talk Gertie to Me. The book received some glowing reviews, including one from Booklist, which stated, “Winston’s small-town-girl-makes-good romance shouldn’t be missed.”

I, for one, am incredibly grateful Lois never gave up. Five years after the release of Talk Gertie to Me, Assault With a Deadly Glue Gun, the first book in the Anastasia Pollack Crafting Mysteries hit bookstore shelves. Without Gertie, there never would have been an Anastasia. 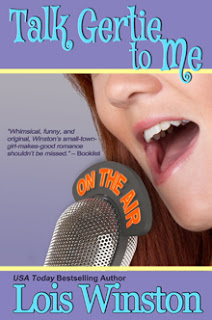 Talk Gertie To Me

Two years ago Nori Stedworth fled the conservative mentality of both her parents and Ten Commandments, Iowa, for Manhattan. She loves her new life—until one devastating afternoon that culminates with the arrival of her mother. Mom Connie is suffering from middle-age meltdown. Her only identity is as a wife and mother, but her husband is a workaholic, and her daughter is halfway across the country. Grandchildren would give her life new purpose. If only Nori would come to her senses and marry town mortician and most eligible bachelor Eugene Draymore.

To that end, Mom sets off to bring Nori home. But when she meets Nori’s neighbor, her plans take an unexpected twist, and she’s thrust headfirst into a career as the next Martha Stewart. Suddenly, she’s a somebody in her own right and reconsiders returning to her old life.

As a coping mechanism, Nori resurrects Gertie, her adolescent imaginary friend. A laptop mix-up lands her musings in the hands of Mackenzie Randolph, a talk-radio station manager on deadline to boost sagging ratings or lose his job. He knows he’s found the answer to his prayers when he reads Nori’s make-believe correspondence.

And maybe he’s found much more.

Meanwhile Dad, with Eugene in tow, comes in search of his AWOL wife.Tempers flare when Mom refuses to return home. However, when she and Dad hear Nori on the radio, they unite to “save” her from the corruption of both Mac and Manhattan.

And that’s when things really get interesting.

Happy Anniversary, and kudos for staying the course. I love that song too!

Thanks, Lois, and Happy Anniversary. This story gives motivation to writers to stay the course never give up!
My motto - There is light at the end of the tunnel!

Happy Anniversary.
Glad you persevered and didn't give up.
Big Beatles fan. Being a Boomer I grew up with them.

Thank you, Judy, Kathy, and mypalbuddee for stopping by and commenting.

I love this song!

Thanks for stopping by and commenting, Angela!