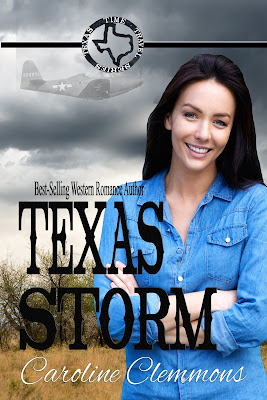 Today we sit down for a chat with author Caroline Clemmons. Caroline writes contemporary and historical western romance, time travel romance (past to present), and mystery. Her romances usually include a mystery because she feels it makes them more interesting to write. Learn more about Caroline and her books at her website and blog.

When did you realize you wanted to write novels?
As a child I used to “write” and illustrate stories—each of which usually involved a beautiful princess in a pretty blue dress. Later I became a voracious reader. It wasn’t until I was married with my own children that I thought about writing for publication. My first book was Be My Guest in 1978.

How long did it take you to realize your dream of publication?
Years and years and a lot of rejections. Until I joined Romance Writers of America, I didn’t realize how bad my letters requesting representation and/or publication had been. This is why I recommend anyone who wants to become a writer to join a professional chapter, which has quality programs on the basics of writing and access to those who need critique partners. Any critique partner won’t do—I’ve had a couple of terrible critique partners (one who plagiarized my work) and some excellent ones.

Are you traditionally published, indie published, or a hybrid author?
I began with a traditional NY publisher but they dropped me after four titles because I argued with marketing—not a good idea. Still, I was right, and they were not, and now I make more indie than I ever could have made with them. From NY I went with a lovely small press, The Wild Rose Press. Lovely, professional staff but I decided to strike out on my own. I’ve been very pleased with the result. In my opinion, indie publishing is the best!

Where do you write?
I have a small office adjoining our master bedroom. The walls are pink, so my family calls it my “pink cave”. I use a desktop with a thirty-inch television as a monitor that is so easy on the eyes after hours of writing. So nice to have a short commute to work.

Is silence golden, or do you need music to write by? What kind?
I used to listen to classical music while I was writing. For the past two books I’ve used Dragon speech-to-text software due to wrist and hand problems, so I’ve not had music in the background. My West Texas twang is confusing enough for Dragon without adding music. However, my wrist and hand problems are almost gone.

How much of your plots and characters are drawn from real life? From your life in particular?
We are the sum of all our life experiences, so in that way I suppose all plots and characters come from my life or what I observe around me. I strongly feel that each character carries a part of me, even the villains. Each of us is so complex that we have many “people” living inside of us.

Describe your process for naming your character?
Character names are serious business. If historical, I choose a name that’s correct for that time period. If contemporary, I still choose carefully. Names can set a mood. Heroes especially need a strong name. My latest heroes are the Knight brothers and their cousin.

Real settings or fictional towns?
I prefer fictional towns so no one can say, “I’ve been there and that street doesn’t have a café” or some such comment. With a fictional place, I can put whatever I want/need in the town and no one knows the difference. I often have a real town or city nearby, however.

What’s the quirkiest quirk one of your characters has?
I’ve had some pretty quirky characters but I suppose it’s the heroine of Texas Rainbow who loves vintage clothes and speech.

What’s your quirkiest quirk?
So many to choose from, LOL. I suppose it’s my addiction to Cherry Dr. Pepper.

If you could have written any book (one that someone else has already written,) which one would it be? Why?
I guess it would be Julie Garwood’s Prince Charming. I love that book and reread it occasionally. She achieved the perfect blend of English and USA western historical.

Everyone at some point wishes for a do-over. What’s yours?
How long do I have? My stars, there are so many things I wish I’d done differently, especially raising our daughters.  I wish we’d home schooled them, done all sorts of things differently. They turned out so well and I’m proud of the adults they are—and a little in awe.

What’s your biggest pet peeve?
People who think tearing down someone else elevates them. Why not be kind?

You’re stranded on a deserted island. What are your three must-haves?
1. My husband
2. A machete if there’s vegetation on this island
3. Fishing line (my husband is a great fisherman so we wouldn’t starve)

What was the worst job you’ve ever held?
I once worked for a doctor who was ill-mannered to his patients and a pinch-penny with his staff.

What’s the best book you’ve ever read?
That depends on my mood. Among those I’d consider are westerns by Louis L’Amour, Lord Perfect by Loretta Chase, Prince Charming by Julie Garwood, and The Promise of Jenny Jones by Maggie Osbourne. I love reading, so I could go on and on with books I loved enough to save them and reread.

Ocean or mountains?
In general I prefer mountains because I really dislike being hot. I do love watching waves, so if I can stay indoors and view the water through glass, that would be nice. I love walking on a beach when it’s dark and the moon is out.

City girl/guy or country girl/guy?
City girl now. We lived in a rural area for a couple of decades, but moved back to the city four years ago. I do enjoy being close to everything I need and having a well-manicured lawn cared for by someone else.

What’s on the horizon for you?
More books! I plan a book a month for the rest of this year. I have so many plots and characters in my head that I want to write.

Anything else you’d like to tell us about yourself and/or your books?
Not just for me but for all authors: if you enjoy a book, please leave a nice review.

Jeannie Luttrell’s passion in life is piloting airplanes. She doesn’t mind the low pay, long hours, or the fact that as a World War II Women’s Air Service Pilot (WASP) she has to pay her own expenses. A faulty oil pressure line causes her P-51 Mustang’s engine to fail and she has to bail out during a storm. When she lands the wind drags her across the ground and into a small ravine where her head strikes a rock.

When Caleb Knight sees a person struggling with a parachute on his cousin’s ranch, he knows what has happed. Another woman has landed in the small part of a ravine that appears to be a time portal from the past. Twice before a woman has come forward in time at this spot. He stops and takes the stranded pilot to his cousin’s home but then he plans to be uninvolved. Darned if he’ll let the family rope him into their shenanigans.

No matter how hard he tries, Caleb can’t avoid Jeannie. Soon, he isn’t so certain he wants to. But, how can two strong-willed individuals who view the world differently build a relationship?  Especially, now that they have the same enemy plotting against them?

Buy Link
Posted by ANASTASIA POLLACK at Thursday, May 24, 2018

Thank you so much for the interview and promotion on your clever blog site.