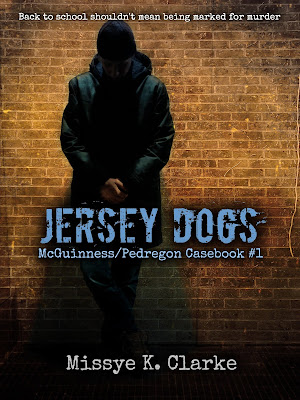 Today we sit down for a chat with author Missye K. Clarke. Missye writes in a variety of genres, including (but not limited to) mystery, suspense, new adult, magical realism, and urban fantasy. Learn more about her at her blog.

When did you realize you wanted to write novels?
Nearly twenty-one years ago, when my kids were still young and the story ideas and cast of characters were too big for short stories.

How long did it take you to realize your dream of publication?
I’ve been writing journalistically since the mid-1980s, so I’ve had bylines numerous times, which never get old seeing. I was lucky enough to get in when editors and newshounds were willing to mentor and help a journalism apprentice grow and hone their craft. Though I still periodically freelance. My first novel idea came to me in 2005 with the convergence of several events: New York Governor Eliot Spitzer had resigned and comedian Richard Pryor had died. There was also the mob-related back-story of why my family and I moved to Arizona in 1980 and my long-deceased maternal grandmother being a shameless alley cat to fund her vices. Something clicked. I changed these elements slightly, tucked in the offstage murders of two prostitutes, and thirteen years later in the same month the idea bloomed, Jersey Dogs, Casebook #1 was born.

Where do you write?
At home, mostly. Sometimes in a bookstore or where there are comfy chairs. And I always have a notebook and pen in my backpack to write longhand.

Is silence golden, or do you need music to write by? What kind?
Silence sometimes but other times I’ll have a song I adore on repeat, putting me in the “zone” where I can almost hear my cast talking, and I can’t type fast enough to keep up!

As for which kind(s) of music I write to, it really depends. I’ve listened to verything from Motown to Patsy Cline to opera to movie scores while writing.

How much of your plots and characters are drawn from real life? From your life in particular?
Always from my life and always from real people!

Describe your process for naming your character?
I don’t really have a process; I just pair together names that sound really cool, roll off the tongue with ease, or aren’t used beyond their expiration dates. (John Smith, anyone?) Also, the name has to fit the character. If I need a name, I’ll look at street signs, read a book, check out old world maps, listen to music, I’ll ask people what names work for them, etc. I once even found a great name from an episode of Jerry Springer.

Real settings or fictional towns?
Both.

What’s the quirkiest quirk one of your characters has?
Casper frets his thighs or air guitars when he’s nervous, cornered, or frustrated (he’s an acoustic player). His cousin Logan finger-combs his curls for the same out-showing of nervousness or frustration. But when Jay Vincent Pedregon’s laughing really hard, his laughs end with hic-CAWS! that sounds like goose honks while in flight.

What’s your quirkiest quirk?
I either have to have the window seat or the top-most bunk in a bed. Slightly claustrophobic, I prefer being up high and wide open spaces.

If you could have written any book (one that someone else has already written,) which one would it be? Why?
Sorry, I’ve more than one: Mark Twain’s Huckleberry Finn, C.S. Lewis’s Narnia books, D.J. MacHale’s Pendragon series and Piers Anthony’s Xanth books.

Everyone at some point wishes for a do-over. What’s yours?
Reuniting with my book boyfriends sooner than I’d done.

What’s your biggest pet peeve?
When people say they want real people and sometimes land somebody like me, they’re suddenly a): shy, b): have pressing business elsewhere; c): nakedly run the other way; d): shamelessly ignore me; or e): all of these above. I’m intense. I’m in-a-good-way scary. I’m a bold, acquired taste. I’m a loudmouthed extrovert. But I’m also the best friend you’ll ever get to know if you’re good with getting past the uncomfortable.

You’re stranded on a deserted island. What are your three must-haves?
Fresh water. Fire. And a way to keep from severely sunburning.

What was the worst job you’ve ever held?
Three jobs where all three bosses went out of their way to make me feel unappreciated and/or covertly wishing they’d not have me on staff.

What’s the best book you’ve ever read?
Leaving the religious factor out and read strictly on a literature standpoint, I have to say The Bible. It’s got everythng in there: mystery, homicides, fantastic sex scenes, intrigue, complex characters, etc.

Ocean or mountains?
Both.

City girl or country girl?
Having lived in both, also both. I need the energy people feed me, even if they sometimes get on my nerves, but I'll never skip a chance to go to the country and stargaze.

What’s on the horizon for you?
Lord willing, I’ll be tending bar, taking forensic classes pertaining to my mysteries, teaching myself acoustic, and moving west after my family and I see the total solar eclipse in Erie, PA in April, 2024.

So that’s me. I hope you post a comment here and stop by my blog to share your thoughts, insights, and perspectives. I love to hear from readers.

Casper's and Logan McGuinness's junior year opens with a bloodstained, unexpected contact and an eerie text coming to pass. While Enzo and Angela de Francisci's stubbornly refuse to explain the boys' biologic parents' backstories, the cousins dig into their pasts in stealth, only to unravel a sordid history meant to stay unknown and bigger than they realized. The first of several attempts on the boys' lives reveals a desk clerk's true identity, and conversations with a former john, lands Casper and Logan on the streets of New York and respite from a former madam. Through an intricate tale of loyalty, humor, first love, and discovering trust and sacrifice, Jersey Dogs Casper and Logan venture into the personal and collective unknown to stop a brutal killer and a network of thugs from fulfilling a murderous to-do list—and learning to trust one another so they'll stay two steps ahead of alive.