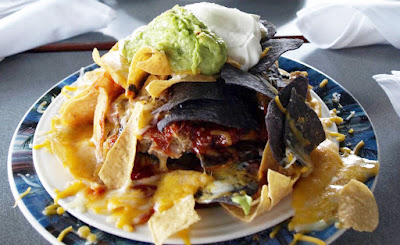 Judy Penz Sheluk is the Amazon international bestselling author of the Glass Dolphin Mysteries and the Marketville Mysteries. Her short stories appear in several collections. Learn more about her and her books at her website.

Along with their signature drink, the Treasontini, The Hanged Man’s Noose is known for their Full Noose Nachos, which according to the series’ main character Arabella Carpenter, are “to die for.” Definitely not diet food!

You can also find a printable PDF copy of this recipe, as well as the Treasontini, on my website’s Food & Drink page.

The Hanged Man’s Noose is available in trade paperback at all the usual suspects and in eBook format on Kindle, Kobo, Nook, Apple Books, and GooglePlay.

Full Noose Nachos
Note: You’ll notice there are no amounts given for each ingredient. That’s because you decide how much or how little to use of each, depending on your taste and the number of people you plan to serve.

Place a layer of tortilla chips on an oven safe pan or cookie sheet. Top tortilla chips with a sprinkling of each of the main ingredients, building layers of chips and ingredients as you would with lasagna, topping with the remaining cheese.

Heat until cheese is melted. Remove from oven, place on plate, and top with guacamole and sour cream. Serve with salsa. 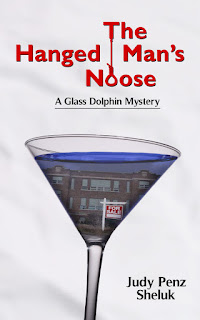 Freelance writer Emily Garland is cash-strapped, newly single, and tired of reporting on the same old condo stats. When she’s offered a lucrative assignment in the village of Lount’s Landing, she decides to take a chance. All she has to do is relocate and uncover the real story behind a proposed redevelopment plan. What could possibly go wrong?

Plenty, as it turns out. Not everyone is happy with real estate mogul Garrett Stonehaven’s plans to convert an old schoolhouse into a mega-box store. At the top of the list is Arabella Carpenter, the outspoken owner of The Glass Dolphin antiques shop, who will do just about anything to preserve the integrity of the town’s historic Main Street.

But Arabella is not alone in her opposition. Before long, a vocal dissenter dies. A few days later, another body is discovered. Though both deaths are ruled accidental, Emily’s suspicions are aroused.

Putting her interview skills to the ultimate test, Emily teams up with Arabella to discover the truth behind Stonehaven’s latest scheme—before the murderer strikes again.

Thanks for hosting me again, Lois!

We're always delighted to have you drop by for a visit, Judy.