BOOK CLUB FRIDAY--KICKING OFF THE HOLIDAYS WITH AUTHOR CHRISTINE DESMET 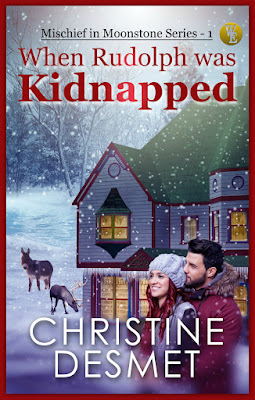 Blink, and the holidays will be upon us. Hard to believe, isn’t it? From now through the end of the year we’ll be periodically featuring authors of holiday mysteries who will talk about their favorite holiday memories and traditions and even a favorite holiday ornament or two.

First up is Christine Desmet, author of the Fudge Shop Mystery Series and the Mischief in Moonstone Novella Series, to talk about a wonderful childhood tradition from her days growing up on a farm in the Midwest. Christine is also a screenwriter, as well as a writing instructor at the University of Wisconsin-Madison Continuing Studies program. Learn more about her and her books at her website.

A Homemade Ice Cream Headache
When I was growing up, the holiday season meant an odd array of tastes and smells mashed together.

There was always homemade vanilla ice cream made with ice chipped from the cow’s watering tank, pickled herring for Dad, oyster stew for Mom (which she made herself), and when I got old enough (around age 14)—a “hot toddy.” The latter was made of hot eggnog with a splash of brandy from a small bottle my parents kept hidden.

I grew up on a southern Wisconsin dairy farm in a family of five kids. My siblings were all younger than I was but close enough in age that we could play and work together. We didn’t have much in the way of fancy food or fancy anything. It was a thrill on the last Saturday catechism before the Christmas holiday to get a small sack with an orange in it. Sometimes Santa would leave an orange in our stockings at home, too. Stockings were pinned to the arms of our red sofa because we didn’t have a fireplace.

One of our best holiday traditions was making homemade ice cream. We loved it, but boy was it work. My mom expected us to work for it, too. If we wanted ice cream, we had to take an axe and chip away at the ice that had formed in the watering tank for our herd of Holsteins.

We lived six miles from our small town, and even if we wanted to buy ice back then you wouldn’t have found it in the little grocery’s freezers. Besides, what farmer would be silly enough to waste money on ice when you had it just outside the door in the cow tank!

My brothers are all younger than I am, but by the ages of 10 or 12, they were strong and had been driving tractors and stacking bales and such for about four years. They’d get the axe or hatchet and away they’d go to the frozen tank and chip away for a half hour or more to get a couple of buckets of ice. I would sometimes help collect the chips and put them in pails. We never thought about the danger of a kid wailing away with an axe. We were taught early how to be careful on the farm (though accidents did happen).

For Mom, this activity of making ice cream was a great way to get us five kids out of her hair, as she’d say.

After sending us outside on a blustery, freezing and snowy day, she might use the time to roll out bread dough on the big kitchen table and knead a half dozen loaves. She made fresh bread almost every day in all the years I was growing up. The holiday season required more bread for the turkey stuffing, but Mom also needed mega amounts of bread for toast and sandwiches for us kids because we were home from school for two weeks. My oldest brother was constantly saying, “Mom, what’s to eat?”

The house smelled heavenly of bread baking by the time we hauled in the ice and got the ice cream maker up from the basement. One of us would go out through the cold and snow and retrieve a gallon or two of fresh creamy milk from our bulk tank in the milk house connected to the barn. Mom dumped the milk, sugar, several egg yolks and vanilla extract into the stainless steel cylinder.

Then it was time to turn the crank by hand. (There was no such thing as an electric churn in those days.) This was torture because it felt like the cranking went on for an hour (which it may have) and our arms would fall off.

As the ingredients turned into ice cream, the cranking became harder and harder. We would switch off regularly. And sometimes argue about whose turn it was.

We also had to keep adding ice chips and sprinkle salt on top of them to keep the scientific process of ice cream moving forward. It always amazed us that “melting” the ice created “frozen ice cream.” Mom would take the lid off the top of the steel drum now and then and declare, “Too soupy. Keep cranking!” We groaned.

After our “arms fell off,” we had ice cream.

We were so eager for the tasty reward that when it was dished out in cereal bowls we’d eat it too fast. Talk about a headache!

We never learned. Every time we made homemade vanilla ice cream, we knew we were in for a headache. But it was worth it.

Ice cream made that way during a holiday time is something special, a wonderful way for a family to enjoy being together.

When Rudolph Was Kidnapped
Mischief in Moonstone Series, Novella 1

This delightful series focuses on the humorous mystery and romantic adventures of the kind folks who live in the environs of a small village nestled on Lake Superior in northern Wisconsin. Along the way in the series, silkie chickens, a giant prehistoric beaver skeleton, a kidnapped reindeer, and other flora and fauna contribute to the amusing mischief and mayhem.

When her pet reindeer, Rudolph, is stolen from the live animal holiday display, first-grade teacher Crystal Hagan has a big problem on her hands. Her students fear that Christmas will be canceled. Ironically, the prime suspect is a man who lives in a mansion known as the "North Pole". And to her shock, Peter LeBarron admits to kidnapping Rudolph and he won’t give him back without some romantic "negotiations".

I thoroughly enjoyed reading Christine's reminiscence of making homemade ice cream — and the freezing headache that went along with it.

Thanks, Laurie! I can't begin to compete, though, with all those good meals you post on Facebook and the yummy stuff you have in your new book!

Chris--Wow, what a great walk down memory lane. I didn't have to make homemade ice cream, but we lived in the era of refrigerators with a freezer inside it about the size of a quart of ice cream. So, we got our ice cream in square pints which we sliced and divided among the family the same day it came home. Freezer space was a premium.

Love your books as ever!!!

Thanks, Barb. I recall that as I got older, the Schwann's truck made deliveries to farmers and we'd get the five-gallon drums of ice cream for the freezer in our refrigerator. We were lucky enough to have a fairly large bottom freezer compartment. Maple nut was a favorite flavor for my dad, as well as butter brickle. The ice cream never lasted long with my one brother who was always hungry, as teen boys tend to be.

What a wonderful journey to the past. I spent many summers on my grandmother's farm and I can still picture her kneading bread dough and the wonderful smell of that baking bread. She raised five children on that farm as a single mother. My grandfather died young. She actually turned down the veteran's benefits she was entitled to. She sent the checks back. She said she could support herself and the government had better things to spend their money on. An amazing lady. I have her diary and hope to get her amazing life on the page some day.

Greg,
What a good memory of your grandmother. What a hard-working women with conviction. I was part of a family of 5 kids, too, all within 8 years total. Mom (and Dad) had their hands full just to keep meals appearing on the table for us all. Your memory is a wonderful one. Thanks for sharing. --Christine