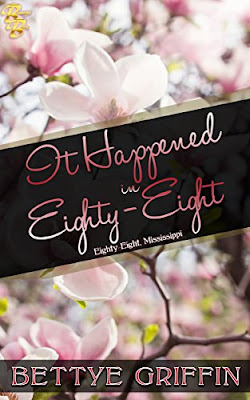 Today we sit down for a chat with Oliver Gourdine from author Bettye Griffin’s Eighty-Eight, Mississippi series.

What was your life like before your author started pulling your strings?
I was, and still am, just a humble country lawyer from the quiet town of Eighty-Eight, Mississippi.

What’s the one trait you like most about yourself?
My sense of fair play and adherence to the law. I really should have been a judge. You should have seen me in action when local resident Courtney Mathis and outsider Jordan Thomas got into a nasty custody fight in Since I Fell For You. That situation was stickier than molasses, but I handled it. And I couldn’t be more pleased with how things turned out.

What is the strangest thing your author has had you do or had happen to you?
In Weekend in Eighty-Eight she had lifelong Eighty-Eight resident Simone Degree come into my office and demand to know the identity of her biological mother. Apparently, my elderly daddy got a little confused one day when he saw her in the park and started blabbering at her like he was in the past, but came back to the present just in time to deny he knew anything. That was weird with a capital W. Poor Simone was desperate to know about her birth parents. As the only attorney in town, I thought I knew everybody’s secrets…but I sure didn’t know about that one.

Do you argue with your author? If so, what do you argue about?
I’d like to be the leading man in one of Bettye’s books, but I’m relegated to secondary character status. I guess romance lovers aren’t interested in reading about a gray-haired, overweight sixty-three-year-old man who’s been married for nearly forty years, even if he’s still madly in love with his wife. But Bettye accommodated me…in a way. Her next book in the series, as yet untitled, is centered around the fallout from a tell-all novel an anonymous author wrote that’s clearly based on events in the town, a fictitious story about a murder…and the murder victim is a small-town lawyer who knows a lot of secrets. In other words, the mystery is centered around a character who’s based on Yours Truly. I just wish I knew who wrote it…

What is your greatest fear?
That the residents of Eighty-Eight will learn just how wealthy I am. I might look like a humble country lawyer, but I’m really loaded, thanks to my investments.

What makes you happy?
Money, of course. And power. As the only attorney in town, I’ve got the scoop on everybody…and they know it. Plus (and I should caution that these answers aren’t in order of importance), I love my wife, my son, and my grandchildren. I just wish my son and his family lived closer.

If you could rewrite a part of your story, what would it be? Why?
That’s just it. I don’t get a story. I’m just a secondary character, a piece of the glue that holds this series together. Nobody wants to read about my love story with my wife, Gloria, which happened forty years and a hundred pounds ago (we’ve each put on some weight over the years and are no longer the svelte young couple we once were).

But I’m proud to have played a role in a couple of local romances, like that between schoolteacher Cornell Sebastian from DeSoto County and local kitchen designer Ajay Vincent in It Happened in Eighty-Eight. I handled the estate of Cornell’s great-uncle, who left her his house. She met Ajay when she decided to update the kitchen in preparation for selling it. That girl looked a little lost when I first met her, but I’m happy to say that she seems to have found her footing…and a happily-ever-after to boot.

Of the other characters in your book, which one bugs you the most? Why?
It’s a tie: Senator Philip Reavis, because he’s a hypocrite…acts like a white supremacist to get votes when he’s known all along that his mama was of mixed race; and Leticia Sterling, because she’s a liar. That girl damn near ruined Ajay Vincent’s life and got him branded as a sex offender. Neither is the behavior of a good Christian.

Of the other characters in your book, which one would you love to trade places with? Why?
I’ve had such a good time, I’d love to be young again and do it over. Some of the folks who’ve fallen in love here in Eighty-Eight are in their 50s, like Simone Degree and that Yankee from Illinois whose grandfather was born and died here in Eighty-Eight…but others are younger, like Cornell and Ajay and the latest romance to blossom, between Shayla Sterling and that fabulous blues singer from Memphis, Luke Willis in Dream Come True. Gloria and I really dig his music. So why I wouldn’t really want to trade with anyone, I’d love to repeat my life. Law school, courting Gloria, raising our son, watching the so-called “new Mississippi” rise after the Civil Rights Movement…the whole nine yards. It’s truly been a wonderful life.

Tell us a little something about your author. Where can readers find her website/blog?
Ah, Bettye. She works real hard to bring her readers interesting stories with unforgettable characters. She really should be better known than she is, but, as another memorable character (Hyman Roth from The Godfather, Part II) once said, [puffs out chest and lowers chin] “This is the business we’ve chosen.” Not that there are any gangsters here, but the concept fits. Every actor isn’t going to be Al Pacino; every actress won’t be Meryl Streep.

Here’s some good news: Bettye has lowered the price of the first book in the Eighty-Eight series, It Happened in Eighty-Eight, to just $1.49, through December 12th. You can learn more about Bettye at her website.

What’s next for you?
Now that the gym I opened in partnership with a young fitness expert is open, Gloria and I are trying to lose weight. Gloria is my assistant, and she also handles the real estate transactions in town. Eighty-Eight has declared itself the healthiest city in Mississippi, and it doesn’t look good for its leading citizens to be carrying around an extra seventy-five pounds, but what can I say? I love me some fried bananas and sweet tea, and Gloria makes a mean fried chicken and biscuits.

Oh, and I’ve got to smooth some ruffled feathers. The whole town’s in an uproar over a new novel that was clearly inspired by events in the lives of our residents. I hear that even Senator Philip Reavis, who was born here in Bolivar County, is hot under the collar that a local rumor about his mama has now spread all over the country. Some old scandals have been brought back to life, plus some new secrets have been uncovered, and a lot of folks aren’t happy about it. The problem is, the book was written under a pseudonym, and nobody knows who wrote it. I feel sorry for the author if their identity is revealed. But Christmas is coming…it looks like forgiveness is the order of the day. (Note: Bettye had hoped to publish a Christmas story about all the things going on in Eighty-Eight, but her freelance editing services have been in demand lately, so that book has been postponed until the first quarter of 2019).

Eighty-Eight, Mississippi, a town that has more secrets than it has magnolia blossoms...

Schoolteacher Cornell Sebastian returns to the Mississippi town that had been her salvation after a traumatic experience ten years before when she was just fifteen. Her uncle has willed his house to her, which she plans to spruce up and sell. Living on her own for the first time bolsters her self-confidence, and she begins to think that maybe she can put her nightmare past behind her…but there’s just one thing she needs to do to accomplish that, and it’s not something she can do alone…

Kitchen and bath designer Ajay Vincent is enchanted by the new woman in town when she hires him to update her kitchen. As he gets to know Cornell, he suspects she has a troubled past, but his confidence that she will eventually confide in him turns to frustration as her issues stall their burgeoning relationship. When Cornell finally does share the details of her past with him, Ajay is left with a dilemma, for learning her secret makes it all but impossible for him to tell her his own…