Simon Wood is the USA Today bestselling author of a dozen thrillers and mysteries. Originally from the UK, he resides in California with his American wife, Julie, a longhaired dachshund, six cats, five chickens, a few dozen tropical fish and several thousand bees. Learn more about Simon and his books at his website.

However, the week before Christmas, he didn’t cover himself in glory. My mum had finished baking a Christmas fruitcake. She was letting it cool on the kitchen table so she could add marzipan and icing later. I wandered into the kitchen at some point to find this eight-month-old dachshund puppy had managed to hop onto a chair, then climb onto the table, and was now chowing down on the cake. This cake, which was still warm, was easily 5 lbs. or so and he was about 3 lbs. into it.  He stopped eating, stared at me and wagged his tail guiltily. I called out to my mum with the news. She told me not to tell tales (somewhat of a thing for me) but I said no, no, scout’s honor. My mum came out to see the carnage. I thought, along with Max, that he was going to get a walloping, but my mum said his punishment would come in about 6-8 hours when nature had taken its course.

Max made up for his indiscretion on Christmas morning. I guess our excitement of opening presents infected Max. As we tore the wrapping off our gifts, Max joined in. We stopped unwrapping our presents and let Max do it for us. If we showed him the corner where to start, he would carefully strip the paper off. We might not have had any Christmas cake in 1981, but that dog turned Christmas morning into a joyous occasion.

Max is long gone, but the memory of that morning has never left me. 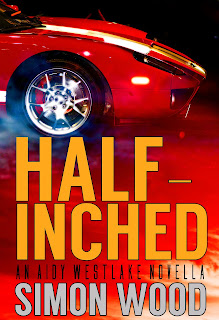 Christmas has gone sideways for racecar driver, Aidy Westlake. Aidy’s grandfather, Steve, was just putting the finishing touches on a classic Ford GT40 he was restoring for a British millionaire when it was stolen from his workshop. They quickly establish that the supercar was stolen to order and is in now in Moldova in the hands of the notorious gangster, Lupul. There’s a wrinkle. The police in Moldova don’t care. The theft of a rich man’s toy doesn’t rank high on their priorities. The client’s ultimatum is simple—cover his one million pound loss or recover the car by Christmas Day. With the threat of financial ruin hanging over his grandfather’s head, Aidy’s crew has only one option—steal the car back.