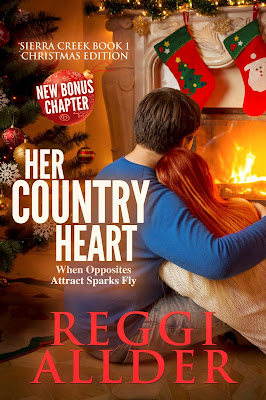 Suspense and contemporary romance author Reggi Allder writes joins us today to talk about her family Christmas celebrations. Learn more about Reggi and her books here.

I love Christmas, music, lights, food and decorations. Every year I’m thankful our family members are able to be together.

I’ve lived in large cities and small towns. Both places have their own appeal. Wherever I am, Christmas dinner is the same. Some family members like turkey, some prefer ham and a few are vegetarian, so faux turkey works for them. Dessert can be a challenge. One relative can’t eat anything with milk, others want to cut back on sugar. However, everyone agrees on my recipes for from-scratch almond cake, pumpkin pie, and apple pie. I don’t bake too often, but during the Christmas season, I like to do more.

Apple pie isn’t a traditional choice for Christmas, but it’s a family favorite. There are many varieties of apple available from around the world. The Granny Smith, Macintosh, or Golden Delicious work best for pie—not too sweet.

Traditional songs like Silent Night and Oh Holy Night are usually played in our home, but I heard a song that was more country. Santa Looked a Lot Like Daddy is a song co-written by Buck Owens and Don Rich in 1965. The song has been covered by several country music artists, including Garth Brooks and Brad Paisley among others. This tune rings a bell for me because when the kids were young, my husband always dressed up in a Santa suit on Christmas Eve. He would knock on the front door carrying his bag of gifts and come in to hand them out. Later, he’d excuse himself by saying he still had many homes to visit. Afterward, he would return dressed as dad again.

One year, our youngest said he could tell it was Daddy because Santa wore the same glasses as dad did. The jig was up, but the kids still wanted him to wear the suit the next year. Now there is a three-year-old and a five-year-old in our extended family, so the Santa suit will be used again.

When I needed an idea for a farm in Her Country Heart Christmas Edition, an organic apple farm fit the criteria. No food acknowledges the conflict between a man and a woman better than the iconic apple. The fruit signifies the battle between males and females and the temptation of being drawn to someone who has opposite goals.

After being downsized and losing her apartment in the city, Amy Long hopes to find a fresh start in the small town of Sierra Creek. Though she has no experience farming, she returns to run her late grandmother’s organic apple farm.

Cowboy Wyatt Cameron has a vow to keep and knows Amy belongs in the city. She’s in the way of his plans and as executor of her grandmother’s will, he has the power prevent her from staying on the farm.

Will hearts break when opposites attract?

Thanks for having me on your blog. I wish everyone a wonderful holiday season!

Delighted to have you stop by, Reggi!

Lovely post! Family traditions are an important part of the holiday celebrations. I've read, and enjoyed, this story and would recommend it to anyone who loves heartwarming romances.
Happy holidays!

Great post. I know readers will love Her Country Heart.

Thanks for sharing your holiday experiences. I love apple pie, even though its not a Christmas tradition, maybe I will try it this year. Your book sounds like a warm cozy one to curl up with in front of the fireplace.

Hi, jbiggar, thank you for the kind words! I'm so pleased you enjoyed the story. :)

Hi Jen, glad you stopped by. I'm so happy to hear the book sounds like a warm and cozy read. I enjoyed writing it. :)

Hi Reggi, Glad to see you out giving your take on the family traditions. I just went out to cut branches for my front door swags, just a little late this year. I love your book, it is a great read, and I highly recommend it.
Best,
Sylvie Grayson

Oh, Reggi, I love that your husband dressed up as Santa for your kids! What a lovely tradition your family has and even better that you can revive it for the next generation. Hope you have a wonderful Christmas!

Hi, Reggi - Wonderful blog. Love this: "One year, our youngest said he could tell it was Daddy because Santa wore the same glasses as dad did." Haha. Happy holidays!

Hi Sylvie, thank you for commenting on my post and book. So pleased you enjoyed my book! I love your idea of using cut branches for your door. We must try that. :)

Hi Rosalind,thanks, so nice of you to stop by. The day our son recognized his dad was Santa is a favorite family memory. Merry Christmas to you and yours!

Hi Liz Rachel, thanks for taking time to come by and say hello. My hubby and I still smile when we remember that Christmas moment. Happy Holidays to you and yours!