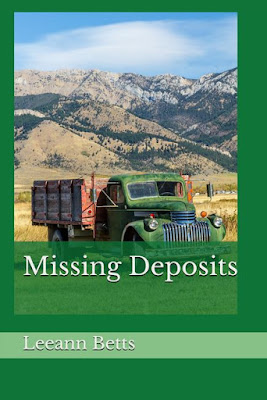 Today we sit down for a chat with Carly Turnquist from author Leeann Betts’
By the Numbers series.

What was your life like before your author started pulling your strings?
Apart from the time I was almost killed in a furnace because I poked my nose in one time too many, my life was pretty quiet. Lived in a small town on the East Coast. Married for the second time, with two adult children from hubby’s first marriage. Minding my own business. Sort of. Like I said, apart from the furnace thing. But you can check that out on here

What’s the one trait you like most about yourself?
My sense of humor. Not that I’m really funny, but I can laugh at myself. I always think that people who take themselves too seriously are—well—too serious.

What do you like least about yourself?
My husband Mike says I’m a full-time job. And he already has enough to do, so I guess if I could change one thing, that would be to make his life easier. I don’t know how I’d do that, though. Do you have any ideas? Maybe you could leave a comment for me at the end of this interview, which is starting to remind me of a lie detector test in some ways.

What is the strangest thing your author has had you do or had happen to you?
My author has put me in some weird places. Most of them tiny towns nobody ever heard of, like a dude ranch in New Mexico, a tiny college town in Arizona that was overrun by the mob, and a dot on the map in Wyoming. But I think the strangest was a cruise to Alaska. Think Titanic meets Murder on the Orient Express.

Do you argue with your author? If so, what do you argue about?
Sometimes we argue. She tries to tell me how I should react, and I have to remind her who is in control here. Mostly I do that by pouting and not talking to her until she gives in.

What is your greatest fear?
My greatest fear is that I will not solve the mystery. Since friends and family are almost always the suspects, that would mean an innocent person would go to prison.

What makes you happy?
Chocolate and binge-watching true crime shows.

If you could rewrite a part of your story, what would it be? Why?
I wouldn’t have married my first husband, and instead would have waited for Mike because I’m still carrying around baggage from that first fiasco. I’d rather have come to Mike untarnished by the past.

Of the other characters in your book, which one bugs you the most? Why?
In this book, the character who bugs me the most is the marshal. He’s supposed to uphold the law, and I don’t know if I can trust him. And by the time I decide if I can or not, I’ve already done his job for him.

Tell us a little something about your author. Where can readers find her website/blog?
My author fell in love with me when she wrote my first story. Much like Dr. Watson is to Sherlock Holmes, or Hastings is to Hercules Poirot, we agreed to keep telling my story as long as we both wanted.

Leeann Betts writes contemporary romantic suspense, while her real-life persona, Donna Schlachter, pens historical romantic suspense. Missing Deposits is the eleventh title in her cozy mystery series, and together she and Donna have published more than 30 novellas and full-length novels. You can find her at www.LeeannBetts.com and www.AllBettsAreOff.wordpress.com

What's next for you?
Next up is a story we’ve both been dying to tell for a couple of years, ever since she went to Peru. The title is Risk Management, and it will release in June 2020.

Carly looks forward to a vacation when Mike is hired to assist a rancher in western Colorado catalogue his various mineral rights following the discovery of a large field of copper. However, Carly soon learns that the real wealth--and the real danger--aren't below ground. Someone is out to keep a secret bigger and more profitable than gold and copper. And they're willing to kill for it.

BONUS: Leave a comment for a chance to win a free print copy (US only) or ebook of Missing Deposits.
Posted by ANASTASIA POLLACK at Thursday, December 26, 2019

Missing Deposits interests me greatly. The mystery is unique and intriguing and the locale is wonderful for this story. Love to read this fascinating book. Thanks.

Thank you for your comment and good luck with the giveaway!

Thank you for hosting me today on your blog!

Missing Deposits sounds captivating. The storyline and setting would be enjoyed. Best wishes.

Hi Petite and Traveler: since you're both such good sports, email me and we'll get you a copy of the book in your choice of format. leeann AT leeannbetts DOT com