CRAFTS WITH ANASTASIA--PANTONE COLOR OF THE YEAR 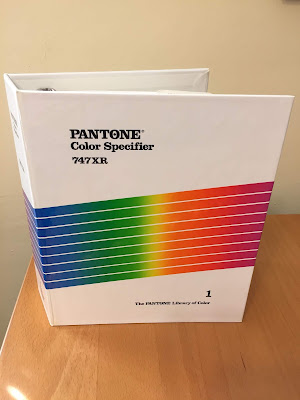 Pantone Color of the Year

The Pantone Color Institute recently released its Color of the Year. For 2020 it’s Pantone 19-4052 Classic Blue, described as “instilling calm, confidence, and connection” and highlighting “our desire for a dependable and stable foundation on which to build as we cross the threshold into a new era.”

I don’t know about the second part of that statement (What new era are we crossing into?), but I’m sure we can all agree that in today’s world we could use some more “calm, confidence, and connection” in our lives.

For those of you unfamiliar with the Color Institute, it “advises companies on color for product and brand visual identity.” So you can expect to see Classic Blue showing up in everything from cars to bathroom towels to designer handbags and much more in the coming year as manufacturers create their new product lines.

The Color Institute has been working with companies for more than twenty years, but Pantone has been around much longer than that. The company began as a commercial printing company in the 1950s and introduced its color matching system in 1963 after being purchased by an employee who standardized and simplified their stock pigments and colored inks. 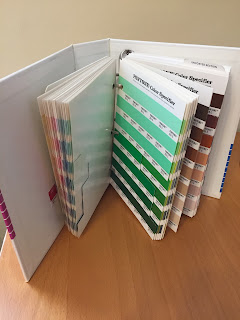 As someone who started her career as a graphic designer and illustrator (back in the prehistoric days before computer design programs), the Pantone Color Specifier was part of my daily life. Much like the paint chips you find at hardware and paint stores that help you choose wall colors, I worked with Pantone color swatches to indicate the precise colors the printers should use to produce the brochures and ads I designed.

The big difference, though, is that those paint chips are free. The Pantone Color Specifier was a binder filled with pages of perforated heavy paper color swatches, and it was extremely expensive. I had no idea how expensive until my first child was born, and a lack of affordable childcare forced me to leave my job and begin freelancing. That’s when I had to purchase my own swatch book. It cost as much as I made in a week!

The design and publishing industries, as well as my life, have changed dramatically in the decades since then. I no longer have a need for a Pantone swatch book. I’m not even sure they’re produced anymore, now that everything is done via computer design programs. Still, having spent a queen’s ransom for that book, I find I can’t part with it. It remains on a shelf in my office.

Maybe someday I’ll find a use for all those pages of perforated colored squares. I’m beginning to write the next Anastasia Pollack Crafting Mystery and need to choose a craft to highlight in the book. Collage, anyone?
Posted by ANASTASIA POLLACK at Sunday, December 29, 2019