Regan Walker is an award-winning, bestselling author of Regency, Georgian and Medieval romances. Each of her novels includes real history and real historical figures as characters. And, of course, adventure and love, sometimes on the high seas! Learn more about her and her books at her website.

Scottish Christmas Traditions
It may surprise you to know that Christmas was not celebrated as a festival in Scotland for about four hundred years. This dates back to the Protestant Reformation when the Scottish Kirk proclaimed Christmas a Catholic feast. While the actual prohibition, passed by Scotland’s Parliament in 1640, didn’t last long, the Church of Scotland, which is Presbyterian, discouraged Yule celebrations beginning as early as 1583. This continued into the 1950s. Many Scots celebrated only the Winter Solstice at the New Year, which came to be known as Hogmanay. Today, it’s celebrated with much fanfare and balls of fire. (See photo above.)

It is believed that many of the traditional Hogmanay celebrations were originally brought to Scotland by the invading Vikings in the early 8th and 9th centuries. These Norsemen, or men from an even more northerly latitude than Scotland, paid particular attention to the arrival of the Winter Solstice, the shortest day, and fully intended to celebrate its passing.

In the late 18th century, Georgian hostesses entertained in grand style. For those who celebrated Christmas, possibly in secret as my characters do, greenery of holly, hawthorn and Scots pine (gathered from the woods) would decorate the house. And there would be a giant Yule log to burn in the fireplace.

Instead of the usual two large courses of food at dinner, wealthy families in Scotland offered guests several smaller courses including soup, fish, game, roast meat, pudding and dessert. Food was richer with more complicated recipes and there was a greater emphasis on cream and sugar in desserts.

In the late 18th century and into the Regency, it became sort of a fad for high-born Englishmen and women, particularly in the literary establishment, to travel to Scotland and write travel books. There are dozens of such examples including Recollections of a Tour Made in Scotland by Dorothy Wordsworth (sister of the more famous brother). However, none is better known than the 1773 trip undertaken by friends Samuel Johnson and James Boswell.

Johnson published his travel book A Journey to the Western Islands of Scotland in 1775, and Boswell waited until 1785 with his Tour to the Hebrides of the same trip. From Boswell’s description of breakfast in 1773:

“They set down dried haddocks, broiled, along with our tea.”

“… as good chocolate as I ever tasted, tea, bread and butter, marmalade and jelly… very good scones, or cakes of flour baked with butter. There was a plate of butter and curds mixed, which they call “gruitheam” (Gaelic)... and cheese… it often smells very strong.”  [Note: gruitheam is a mix of curds and butter]

They also ate “barley bread and cheese” as well as “… milk, cheese, eggs, bread and butter.”

And for other meals, he wrote:

“…all of the people have little boats and catch fish. There is plenty of potatoes here. There are blackcock in extraordinary abundance, moor-fowl, plovers, wild pigeons.

“There is a great deal of fish: rock cod, haddocks, etc., and fresh water trout...a place where one may live in plenty, and even in luxury.”

The Scottish kitchen would turn out an abundance of soups and broths including Cock-a-Leekie (chicken and leek soup), Scotch Broth (barley enriched soup) and Cullen Skink (a stew/soup from Cullen on the shores of the Moray Firth usually made with Finnan Haddock and brose, a simple soup with kale, with a handful of oatmeal).

For the Hogmanay feast, there would be Haggis with tatties, steak pie, Cock-a-Leekie soup and, if you were on the sea, salmon. Haggis, which I have tried, never appealed. It starts with the large stomach bag of a sheep, into which goes the pluck (including heart, lungs and liver) beef suet, pin-head oatmeal, onions, black pepper and salt. I’ll stick with salmon, kale and soup.
For dessert, you might have a clootie dumpling. The clootie dumpling is a traditional Scottish pudding closely associated with Christmas and Hogmanay. It’s like an English Christmas pudding only not as rich. Although flour, suet, dried fruit and spices always feature, the precise ingredients vary from region to region and family to family. The cloth, however, is constant – a reminder of the days before ovens, when family meals were boiled in a pot.

There would be Scottish shortbread, of course, as legendary as oatcakes. But no celebration would be complete in my mind without Cranachan, a dessert that incorporates some of Scotland’s most famous ingredients: raspberries, oats and whisky. You can see the recipe on my website.
What to drink? While distillation of whisky had been going on for a long time by the Regency era, most of the distilleries were illicit. The invention of the column still by Scotsman Robert Stein in 1828 revolutionized whisky making in Scotland. Then in 1831, Aeneas Coffey invented the Coffey or Patent Still, which enabled a continuous process of distillation leading to the production of grain whisky, a less intense spirit than the malt whisky produced in the copper pot stills.

In the early days, Scotch whisky was mostly considered the equivalent of moonshine—a drink enjoyed by unrefined Highlanders, aged in sheep bladders and filtered through tartan. Men like those in A Secret Scottish Christmas would be drinking the finest European wines, along with sherry, port, brandy and cognac.

And, of course, on New Year’s they would sing Auld Lang Syne. A version of the song existed decades before Robert Burns wrote it down. It’s said an old man dictated the words to him. Before Burns wrote it down, the ancient song had been passed on by word of mouth. The melody we know today that accompanies the lyrics didn’t appear until after Burns’ death in 1796.

The phrase “Auld Lang Syne” means “old long ago”, which can be translated as “days gone by” or “back in the day”. Thomas Keith, a Burns scholar, says the song symbolizes reunion, not parting, as some mistakenly believe. The song looks back over happy days from the past, a separation and then coming back together. 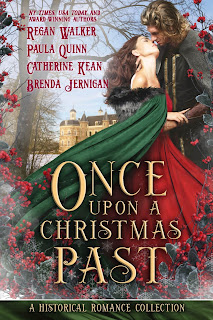 Once Upon a Christmas Past
An Historical Romance Holiday Collection

A Secret Scottish Christmas by Regan Walker
Spies, Scots, and Shipmasters celebrate a very secret Christmas in Scotland as identical twins, Robbie and Nash Powell, spies for the Crown, compete for the love of the daughter of an Aberdeen shipbuilder.

A Highlander for Christmas by Paula Quinn
As the bard of the MacGregor clan, Finlay Grant is a natural-born charmer. He can easily win the heart of any lass . . . but somehow, the right words to express his love for stunning Leslie Harrison have eluded him. Yet as Christmastide approaches, Finn knows he must find a way to propose to the raven-haired beauty who has stolen his heart.

A Knight’s Redemption by Catherine Kean
Six Christmases ago, after refusing his kiss, Lady Mary Westbrook was locked in the dungeon by Lord Holden Kendall, a squire at Branton Keep. When an attempted child abduction days before Christmas brings Holden back to the castle, Mary must confront again what happened between them. Now a grown warrior, Holden resolves to not only make matters right with Mary but finally win her kiss. Yet, as peril ensues, Mary must risk far more than a chance at true love.

Christmas in Camelot by Brenda Jernigan
Sir Nicholas the Dragon’s orders are clear. He is to fend off the enemy besieging Noelle’s castle and bring the lady safely back to Camelot for her wedding to Sir Gavin. But spending time with the proud beauty awakens an irresistible hunger in Nicholas. Now, as desire does battle with duty, Nicholas has only two choices — to surrender the woman he loves to another man or fight to the end to make her his own.

Thanks, Lois, for having me on your great blog...and for the chance to show our Christmas collection, Once Upon a Christmas Past, to your followers!

Fascinating article! Thank you for the opportunity to feature our Christmas bundle, Lois.

You're both very welcome, Regan and Catherine. Happy holidays!