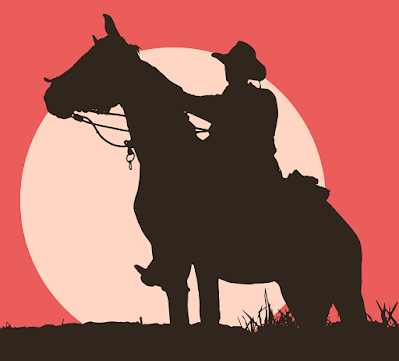 Today we sit down for a chat with David Taylor from author M. Elle Kelso’s Cyber Cowboys series.

I was probably best described as an over-educated computer nerd/minor adrenaline junkie, which I know is a contradiction if there ever was one. I flew helicopters, rode horses without benefit of anything except a halter and a couple of lead shanks as reins – all while searching for black hat hackers, stalkers, and computer fraud artists in my day job.

It was when Blake Corbin, Jared Wynn, and I formed our partnership that I found out there were people out there who needed our help who weren’t suffering problems related to computers.

In our first documented case, a dog breeder, Kaycee Morgan, was being stalked by someone who seemed to want her dead. Kaycee ended up married to Blake.

The second case involved a woman, Annie Bolton, whose dead husband was trying to rob her of everything she owned, not to mention her life. Figure that one out! Annie Bolton ends up married to Jared.

The third case is my book, and yeah, I end up married to the woman of my dreams. It was a bit of a disaster there, for a while, when I lost my head along with the use of my legs. Why C.J. ever put up with me I will never know, but thank God she did.

Maybe I should warn Will Carter, the star of the fourth documented case, or he’ll find himself hitched to our client, Mercy Brittain, by the time he’s done.

That I could finally grow a pair, as the saying goes, and get over the lemon life handed me and quit being a complete jerk to the woman who loved me and stood by me for months after the accident that left me in a wheelchair. She did everything she could to make my life livable, and I took endless swipes at her, then booted her out of my life completely. Only after I got over feeling sorry for myself, thanks to my partners, did I realize that I still wanted and needed her in my life.

I eventually got my life in order and knew that without her, I was nothing. What she gave me was my love of life and her love. Without her, I had nothing, but she took the chance and gave me back my life. For that I am hers for eternity and owe her everything. I’d guess you’d call that trait perseverance because I finally got my life back to my new normal.

My short temper, my ability to block out and ignore others, and to feel sorry for myself. I’m not sure which is the worst. I don’t know where those traits came from because I used to be this giving sort of guy and would help anyone, however when it came to helping myself, I failed miserably.

Trying to crash-land my brand new helicopter on the side of an old rock slide site, big rocks everywhere, no place to set down, after a rustler shot me down. I mean, really! My life had just hit the pinnacle, I had everything; a great wife whom I loved, a horse I had a very strange, almost human bond with, an enjoyable job, and that brand new Bell JetRanger. Then she goes and shoots me down, crashes the helo into little bits of wreckage that come back to injure me, and then, as if that isn’t enough, she takes my legs. Who wouldn’t think that was strange? Or maybe evil? Or at least downright unfriendly. I didn’t know she had it in her to be so nasty, but considering the other books she’s written, maybe I should have at least had a small clue.

I did once and learned my lesson. I tried to convince her the helo shouldn’t crash, that it was a waste of a perfectly good bird, and that she could have had me find a place to land. The rest of the time, she was pretty good to me, but that? That really hurt. But as you can see, she was right. It had to happen just the way she wrote it. I finally learned my lesson.

Oh, darlin’ that’s an easy one. My wife, my horses, my friends, but especially a black Arabian stallion named Mirage. The bond we have is almost as great as the bond I finally achieved with my wife.

If you could rewrite a part of your story, what would it be?

Well I think I’d tell my author not to have me crash that helicopter after getting shot, so I wouldn’t act like a complete jerk and lose the love of my life and the ability to walk. That’s rather demeaning, don’t you think?

Because I could never get back the months I lost putting up a fight against everyone in my life who tried to help and used cruelty I didn’t know I had in me to make my wife leave. When I told her to get out, I meant it; until she was gone and I finally realized what I’d done.

Of the other characters in your book, which one bugs you the most?

There are two - one is Mike, the guy who sold me the helicopter that caused all my problems, and the other is Annie Wynn - because there was a woman who’d been beaten down by life but good and she came back time and again with nothing but love and generosity to everyone around her.

About Mike, I think it’s obvious. The guy cost me my legs and nearly cost me the love of my life. As for Annie, dear, sweet Annie, I mean, who could be that good a person? Really? Turns out, she was.

Of the other characters in your book, which one would you love to trade places with?

Mirage - I’d love to be able to fly over the ground, with the barest of efforts, feel the wind in my face and know I was one of God’s creatures.

Come on, darlin’, wouldn’t you like to trade places with a horse? Think of the life. No worries except maybe when the next meal is coming, getting in out of the rain, standing in the sunshine and having people fawn over you. Maybe an hour’s work each day, if that.

But most of all, the freedom of being one of God’s creatures.

My author is a Canadian who lives in the same province that hosts the Calgary Stampede, and she assures me she doesn’t live in an igloo or walk the streets with moose and caribou. She told me that she loved the great outdoors, knew the Pacific Northwest fairly well having lived there, on the Canadian side of the border and an island, no less, but hadn’t been lucky enough to live where we live in Wyoming. But, her knowledge of things ranching, farming and veterinary care of horses and dogs comes from a family history as well as incredibly deep research. Check her out at mellekelso.com

In Eagle Down, my book, I’m injured in a helicopter crash while investigating a large scale rustling operation and when I wake from my coma, I don’t remember my wife, C.J. or our recent wedding, and I go ballistic when I finds she’s been at my bedside since the accident and knows I’m permanently paralyzed but doesn’t tell me. I throw her out of my hospital room and my life. I don’t have to rescue C.J.—I need to win her back.

Trying to help my author find a new title for Will’s story. She had one that worked, I thought, then she changed it, or tried to. Since she probably won’t listen to me on that one, I’ll just be there when Will Carter needs help with his case.

Her next book in the Cyber Cowboy series is called Mercy Rule and releases March 18th, if she finishes it on time. 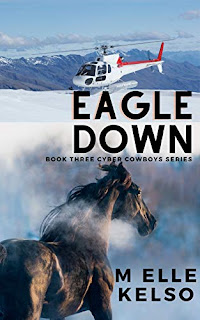 Meet the Cyber Cowboys—a tough bunch of private eyes who know computers and the law inside out and backward. Every time they step out of their computer-P.I. boots—answer a call that doesn’t include black-hat hackers, online hustlers and fraudulent con artists—they meet nothing but trouble. Attempted murder, arson, rustling, and abduction they can handle. Falling in love sends them looking for the ‘help’ button. Computers? Artificial intelligence has nothing to do with it! In every case, these laidback investigators have to get down and dirty to save the women they love.

In Eagle Down, David Taylor is injured in a helicopter crash while investigating a large scale rustling operation and when he wakes from his coma, doesn’t remember his wife, C.J. or his recent wedding, and goes ballistic when he finds she’s been at his bedside since the accident and knows he’s permanently paralyzed but hasn’t told him. He throws her out of his hospital room and his life. David doesn’t have to rescue C.J.—he needs to win her back.