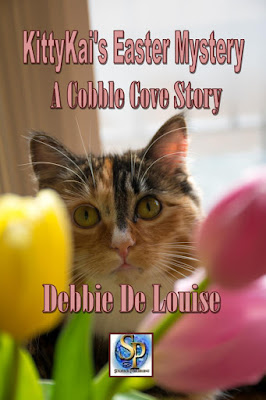 Debbie De Louise is a reference librarian at a public library. She’s the author of ten novels including the five books and four stories of her Cobble Cove cozy mystery series. Learn more about her and her books at her website.

Have you ever had the experience of finding something you’d been missing when you were looking for something else? It happens to me often. I can search for something high and low without any luck, but it usually turns up by accident when I least expect it or am hunting for a different lost item. My anniversary ring was missing for nearly a year when I found it in a drawer under some clothes I was looking through for something to wear. It took me a shorter time to find my library badge lanyard that I’d placed in a bag in my closet, but I also found it by accident when I was looking in there.

When Alicia’s young daughter Carol finds a ring during an Easter Egg Hunt at the Cobble Inn in KittyKai’s Easter Mystery, my new short story featuring the Cobble Cove characters from my cozy mystery series, Detective Ramsay recognizes it as belonging to a missing woman. It isn’t long before the lady’s body is found buried on the construction site where workers had dug for the inn’s new bathroom. While Gretchen’s husband is relieved to finally know what happened to his wife, he’s devastated that she’s dead. But is he putting on an act? Gilly has heard him fighting with his wife. The arguments involve Gretchen’s brother, a rich man who supposedly stole her inheritance from her.

Sneaky and KittyKai once again get involved in solving this mystery by following their ladies, Alicia and Gilly, to a doctor’s office where Gretchen had worked briefly as a receptionist. Sneaky ends up finding a clue by accident in the doctor’s drawer. But KittyKai is the one who saves the day and rightly so, because she’s the inn cat and the inn is where Gretchen Miller’s body was found.

Rachel Hartman on the SpareFoot blog offers suggestions for finding lost items such as keeping those things you use daily in a regular spot, searching for misplaced objects in the most cluttered areas of your home, and using Smartphone apps that help locate missing items. Her post, “Where Did I Put That? 7 Tips for Finding Lost Items in Your Home” can be read in full here: https://www.sparefoot.com/self-storage/blog/14773-where-did-i-put-that-6-tips-for-finding-lost-items-in-your-home/

If someone is lucky, their lost item may turn up or be found by somebody and returned. There are people who swear by St. Christopher medals or psychics. In most cases, if you don’t find a lost object within a few days, you probably won’t recover it. However, there are always exceptions. I never thought I’d find my ring after almost a year, but after twenty years, I’m still looking for a special letter an author wrote to me. It disappeared somewhere between my move from my parents’ house to the one I share with my husband and daughter. That author, now deceased, was a great inspiration to me, and I know that letter would be treasured by me even more today as I continue on my publishing journey. I hope to find it one day, and maybe I will when I least expect it. I doubt it will lead me to a body but maybe the plot for another mystery.

During an Easter egg hunt at the Cobble Inn, a ring is found on the grounds by Alicia’s daughter, Carol. When the sheriff has it examined, he discovers it belonged to him and Gilly’s neighbor, Gretchen Miller, who disappeared the month before. An investigation leads to the discovery of Mrs. Miller’s body buried on the site of the inn’s new construction.

As Alicia and Gilly set out to solve this new mystery despite their husbands’ discouragement, Sneaky and KittyKai, the library and inn cats, secretly lend them a paw.

This book looks and sounds like a great read. Would love to read and review authors books including this one in print format. Love this author.

Thank you, Crystal. This book is only in eBook form. It's one of the Cobble Cove stories. The full-length books are all available as paperbacks.