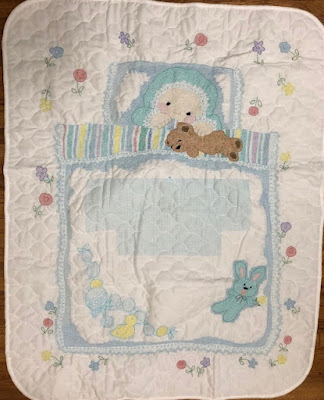 Is Crafting in My DNA?

I come from aunts, a grandmother, and a mom who could do almost anything crafty—crochet, knit, sew, quilt, tat. I distinctly remember at age nine sitting on the porch with my grandmother, who taught me to embroider. She had stamped on a pillowcase an image of a cat stepping on a fork. Of course, my first piece was clumsy (I used four threads instead of three), but I soldiered on. When my #1son was small, I showed it to him, and he insisted THAT pillowcase be HIS pillowcase.

Over the years, I embroidered a lot of pillowcases and most of them were edged with Grandmother’s tatting.

When I was expecting #1son, my mom had found at a five and dime a stamped baby blanket, and that became the special treasure she made for his birth. I had not seen those projects in stores and was interested instantly. When lots of friends my age were having babies, I made quilts for their kids. They saved those quilts and are passing them down to their grandkids.

A very good friend’s son recently married. I had started stitching a needlepoint project when the thought hit me--he might be having a little one someday. I searched my favorite websites to look for a baby blanket. The photo above is the almost completed blanket. 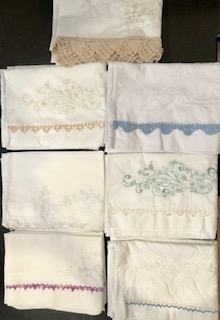 I have to add that I don’t drive myself crazy with the changing of thread colors for shading, and honestly, no one notices. I did use three strands and a superfine embroidery needle. My mom had a method of pulling the threaded needle through the top layer, setting a lock stitch where she wanted to start, and then embroider as she always did. Thus, no knots in the back. For a nice finish, I like to sew large rickrack around the edges. Instead of the baby’s name in the center, I’m stitching “Sweet Dreams,” “Good night,” or “Sleep Tight.” Does anyone have any thoughts?

For this past Christmas, I embroidered nine sets of pillowcases for family and friends. I added Grandmother’s crochet or tatted lace from my collection:

Most evenings, Handsome and I unwind while watching TV. I open up my latest project (a needlepoint Christmas stocking) and stitch. It’s a great way for me to relax and accomplish something productive! 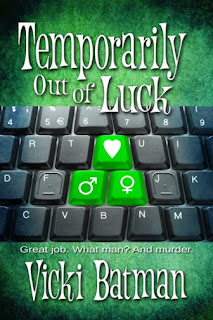 Temporarily Out of Luck

Great job. What man? And murder.

Newly employed at Wedding Wonderland, Hattie Cooks is learning the industry from a woman she greatly admires. When her former brother-in-law is found dead in his luxury SUV, all fingers point to Hattie’s sister, who is planning her own I Dos.

Detective Allan Wellborn is caught between a rock and a hard place—Hattie’s family and investigating the murder of a well-connected Sommerville resident, the same loser who was once married to Hattie’s sister. Determining who’s the bad guy—or gal—isn’t going to be easy and sure to piss off someone.

Can Hattie beat the clock to find out who murdered Tracey’s ex before she is charged with the crime and her wedding is ruined?

Good morning, Lois, and thank you for hostessing me today. I love my crafts and can't wait to get back to stitching. Hugs vb

Loved having you stop by, Vicki!

Your pillowcases are so sweet, Vicki. And useful, too. (I just love that they're useful! I have knitted several scarves that don't get much use, because we don't need them often here in the south. And way too many afghans!)

Hi, Barbara. Thank you so much. I loved making and giving them. Just saw a niece who thanked me again for the gift. I love that you are a knitter. I'm looking for mittens. LOL

Vicki, I used to be able to make mittens! When we lived in Montreal, I made many pairs. I even made a pair of gloves once. Now I can just barely manage a hat. And I have tried many times to make socks, but I always end up dropping stitches or messing up the heel. (Although I did manage some tube socks, but I never wear them, so...sigh.)

Sigh, Barbara. lol. if you ever master mittens...