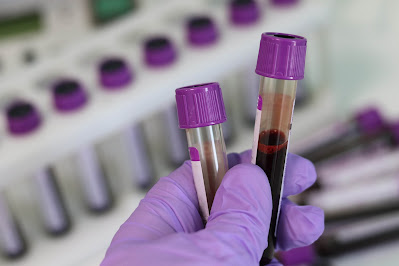 Today we sit down for a chat with Dr. Victoria Roberts from Honorable Rogue, Book 2 in the Blood Rogue Series by Linda J. Parisi.

Absolutely fantastic...all right, I’ll be honest. My fiancée walked out on me when he found out I was pregnant. He used me and our relationship as his ticket to his medical degree. But I got the one thing I ever wanted in this world, my daughter Kelly.

My integrity. I never shy away from the truth. Even though I had blinders on, when I realized how badly Peter had treated me, I admitted the mistake and moved on. I think that’s why Hunter and I are able to deal with each other. I don’t lie. Neither does he.

Being gullible, easy to take advantage of. I truly believe in people. I believed in Peter and look where that got me. My family was destroyed by robbers in a home invasion, and yet I still believe in the goodness of people. I don’t know why.

Walking into a blood donation center run by humans but owned by vampires. Hearing that vampires create food banks and soup kitchens for the homeless.

Yes. Often. I keep asking her why Hunter has to be so damned stubborn and proud. She keeps making him push me away when all I want is to get to know the man inside.

Losing someone else that I love. Which means I’ve built walls upon walls for protection.

Thinking of Kelly. Then, of course, reality intrudes. But for those few moments, my world rights itself.

Singing. I don’t sing in public but, in order to get Hunter out of my head, I sang with the radio on the Garden State Parkway while we sat in traffic. He told me I had a beautiful voice. I’m not sure I believed him. Then again, maybe I did. He doesn’t lie.

I would give anything not to have lost my family in the home invasion. But that trauma enabled me to withstand the vagaries of the vampire world and one very closed off, self-centered, stubborn, proud vampire.

Casperian. I still don’t understand why he hated Hunter so much, or why he felt that owning another human being was an entitlement. Worst of all, he didn’t think he was doing anything wrong.

I shouldn’t admit this but my best friend Stacy. I look at her and her vampire mate Chaz and I’m jealous. I never had anything close with Peter. And now I’m not sure I can with only half a heart, no make that one quarter, left.

Linda Parisi is a clinical research scientist by day and award-winning author by night. I’m a pathologist and I have to tell you, I’m amazed at how Linda has figured out the steps for curing Blood Rogues. Her science is step-by-step logical. And the amazing after-effect of having Hunter drink my blood. Wow. Hot. Real Hot.

You can learn more about Linda and her books at her website. www.lindajparisi.com

I need to help my people, humans and vampires, by figuring out a cure for Nirvana, the drug creating Blood Rogues. I need to stand with Sam, Samira Anai-Sebat, who cares for all of us. Because her brother, Antu Si-Tayat loves to play games. And in his world, we don’t win. 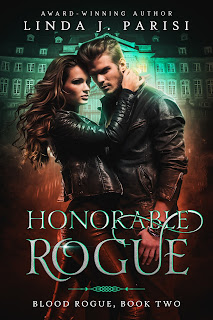 There is the blood and can only ever be the blood. So how can love survive in a world of pain?

As a Roman gladiator and slave, vampire Hunter Pierce only knew death and destruction. Never love.

Dr. Victoria Roberts only knew love and safety, never fear or death, until the day her life was shattered with a home invasion that destroyed her world.

Tori is in danger and it’s all Hunter’s fault. To keep watch over the clever scientist, the vampire enlists her to aid in finding a cure for Nirvana, the dangerous poison rogue vampires are using to kill.

When Tori is kidnapped, Hunter faces his corrupt former master and a race against the clock to save his own life.

But can a vampire who has only watched out for himself risk his life, and his immortality, for the love of a human?

Can a woman who has lost everything rebuild her shattered heart with a man who thinks he hasn’t got one?

Only love, trust, and an Honorable Rogue can save them all.