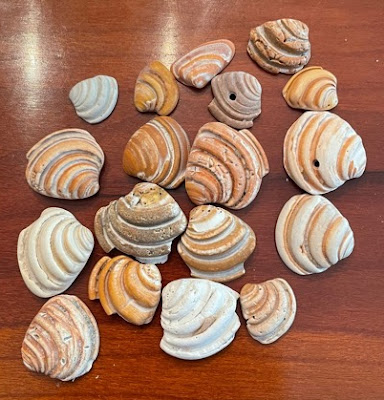 Mystery author and former Kentuckian Jackie Layton loves her new life in the Low Country. Jackie enjoys time on the beach despite one vacation that ended with cracked ribs from riding her boogie board with the kids and another trip that ended up with a hook in her foot and a trip to the emergency room. There’s nothing like time at the beach, although she tends to be a bit more cautious these days. Learn more about Jackie and her books at her website.

I moved to Pawleys Island, South Carolina in April 2019. My husband and I have always loved the beach, and when he was offered a job in this area, we were excited. There are so many reasons we love the beach, and looking for shells is one of them. Where else can you go for a walk and discover so many treasures? I mean, the ocean hits the beach and leaves behind a variety of shells. On a really good day, you can hear them jingle against each other in the water before hitting land.

When we settled here, I heard people talking about the Pawleys Island shell before I ever found one. I’ve collected shells for years, and of course I wanted to find this shell.

Locals told us the Pawleys Island shell could only be found here, but I struggled to find one. We asked for clues. Some people told us to look at the north end of the beach. Others suggested we should look near the walkways onto the beach at low tide. Others said look around the pier.

We tried these tips. My husband and I often thought we had found one of these unique shells until we picked it up. A Pawleys Island shell is fan-shaped. It comes in colors like red, brown, tan, and even green on a creamy background. The ridges are thick and smooth. It’s a calico scallop shell, and it can also be found on the neighboring Litchfield Beach.

We found our first Pawleys Island shell at the most northern point of the island at low tide. After we found our first one, it became easier to find more. We’ve developed an eye for these little gems. If you ask me for tips, my only advice would be to keep looking.

A local jeweler created a collection of silver and gold Pawleys Island shells, and he helped increase the popularity of this unique ocean treasure.

A Low Country Dog Walker Mystery series is set in this area of South Carolina. The town of Heyward Beach is a fictional setting based on some of my favorite beaches, including Pawleys Island. 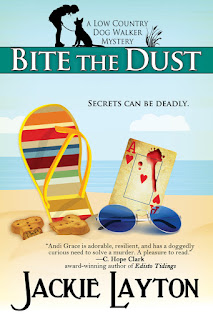 Secrets can be deadly.

Proving her innocence could be a tall order. The local police never solved the hit-and-run that killed her parents; Andi Grace isn’t sure they’ll solve this crime either…not when they have a convenient suspect—one caught with the possible murder weapon in her hand. She’ll have to follow every clue and call in every favor, even if that puts her in danger.

Hi Jackie. I loved collecting shells too. Ten years ago, in Treasure Island, FL, I made quite a haul. Last April? Nothing! Haven't figured that out.