Paty Jager is an award-winning author of fifty-one novels, eight novellas, and numerous anthologies of murder mystery and western romance. All her work has Western or Native American elements in them along with hints of humor and engaging characters. Paty and her husband raise alfalfa hay in rural eastern Oregon. Riding horses and battling rattlesnakes, she not only writes the western lifestyle, she lives it. Learn more about Paty and her books at her website and blog.

Everyone Needs a Hobby

I have admiration and empathy for Indigenous people. I am inspired by their beliefs and culture, I have empathy for the way they have been treated, and I admire their facing all adversities. That is why I do my research, talk to people in the tribes I write about, and try my best to show the good and the bad of their lives.

The main character of my new Spotted Pony Casino Mysteries is a female disabled veteran who grew up on the Confederated Tribes of the Umatilla Reservation. This is a reservation in NE Oregon where the Umatilla, Cayuse, and Walla Walla tribes were banished to during the treaties. There are also some Nez Perce from marriages and very few true Cayuse tribal members. They are a strong group of tribes who are resilient and have learned to use technology and embrace moving into the future all while also managing to hang onto their roots and culture.

Dela Alvaro isn’t Indigenous. Her mother is Swedish and her father was Hispanic. She grew up on the reservation where her mother taught school. After school she joined the army and planned to make a career in the Military Police. However, while out on a mission, their jeep was hit by an IED.

As a lower leg amputee, Dela has had to change her expectations for a job. She also has to learn how to deal with life as an amputee. I, nor anyone in my family, is an amputee. So I have been watching Youtube videos and have joined a Facebook group for lower limb amputees to read how they cope and the obstacles they come across. Reading some of their vents has helped me to better see how they feel and react to situations.

I do this with any culture, occupation, or as in this case, disability I come across to help me portray the character as best I can. I take being as factual as possible in my fiction seriously.

Knowing I had this post to write for Anatasia Pollack’s Killer Crafts and Crafty Killers blog, I decided Dela needs a hobby. Even as an amputee, she runs. She knows her body has to be in good condition to be able to do her job or any job with her disability. But I thought, she needs something she can do for herself. To ease the tension of her job and maybe take her out of herself, if that makes sense.

When you get to know her, you will understand why I didn’t pick hobbies like beading or weaving. Not something she would do. But music…They say music soothes. That is what Dela needs on her down time, something that soothes and lets her forget. I decided to have her play the Native American flute. Not only will she play them, but she is also learning how to make them. Of course, Dela won’t let anyone know she is making them until she feels she has made the best one she can make.

Having been in the Army for nearly two decades, she has to rejoin the civilians, which requires her friends and co-workers to draw her into their lives and make her feel comfortable. I am having a blast writing this character. I hope if you choose to read the book, you’ll enjoy getting to know Dela and her friends. 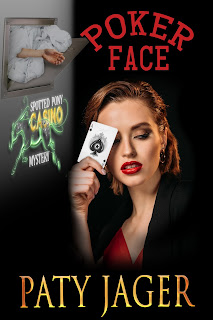 Dela Alvaro is a disabled veteran who grew up on the Confederated Tribes of the Umatilla Reservation. When an IED in Iraq ended her military career, she came home to reassess her life and landed a job in security at the Indian run casino on the reservation.

Not even a year into being the assistant to the head of security, Dela is promoted on a trial basis. When one of the casino employees is found stabbed and stuffed in a laundry chute, she knows she can kiss head of security good-bye if she doesn’t find the killer before the media gets hold of the story.

While she is in over her head, she can’t decide if the FBI Special Agent called in to help is a blessing or a curse. It’s a man she ran across in Iraq who overrode her authority. When a second casino employee is killed, Dela has to decide if she can trust the special agent with not only keeping her job but keeping the rest of the casino employees safe.

Thank you for having back to share about my newest character.