MYSTERY AUTHOR LEV RAPHAEL ON HOW RESEARCH CAN BE MURDER 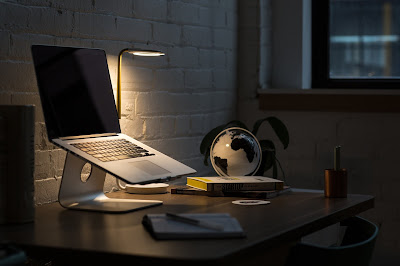 Lev Raphael is the author of 27 books ranging from mystery to memoir. He edits manuscripts, teaches writing workshops, and coaches writers at Write Without Borders. Learn more about Lev and his books at his website.

Research Can Be Murder

In Department of Death, the latest Nick Hoffman mystery set in the wilds of academia, Nick has become chair of his university's English Department--but nobody reading the series could have predicted that would ever happen. It's definitely not something that Nick ever wanted.

I introduced Nick to mystery readers in Let's Get Criminal as an English professor who wasn't respected in his Midwestern department for way too many reasons. To start with, he was a spousal hire, which meant he got his position only because the university wanted to hire his partner. Giving him a job, too, sweetened the deal.

Spousal hires at a university can arouse a lot of animosity in their new colleagues even when they're well-qualified, because they're basically just part of a package deal. In most cases, they would never have been hired on their own at that point in time. Other professors will feel they're intruders, unworthy of joining the rarified club whose membership they guard so zealously. And let's face it, it doesn't take much to anger highly combustible professors anyway in an environment where grudges flourish like feral hogs, walking catfish, Burmese pythons, and other invasive species that are ruining the Everglades.

Nick was also looked down upon because he enjoyed teaching the most basic course the department offered: composition. His peers would do anything to avoid being stuck with it. That kind of course put him at the level of graduate assistants and adjuncts, and liking the hard work involved in helping students strengthen their writing skills created suspicion and even contempt: who was he trying to kid?

And then there was his scholarship: Nick is a bibliographer. A bibliographer of Edith Wharton. That means that he's not only read every single book, story, review, and essay that Wharton wrote, he's read everything that's ever been written about her. In every language. The project took him four solid years. He's annotated each item and created multiple indexes for the bibliography which is a splendid guide for anyone doing research about the American author who was the first women to win a Pulitzer for Literature.

That might sound significant, but to his new colleagues, it's grunt work, uninspiring--and worse than that, his book is useful. Unlike their own books which are written in abstruse critical jargon that only appeals to miniscule audiences.

I chose this focus for Nick's scholarship because my college writing mentor was a Wharton bibliographer and I wanted to honor her years of research. And it appalled me how that book did not get her promoted to full professor when she should have been.

Nick has had a different path, pockmarked by murders of course. He did get promoted to full professor; a visiting authors' fellowship was established in his name by a grateful student who struck it rich; and through a bizarre twist of fate in the 10th book of the series, he's heading up a department filled with people who loathe him more now than ever.

He regrets having agreed to become chair before the first week in his new position is over. What happens? Nick is unexpectedly privy to a bribery scandal that threatens to blacken the name of the university. Nick himself is the object of intense administrative harassment and spying. And of course, he becomes involved in yet another murder.

Can his research skills and his love of crime fiction help him out of this tangle of problems? They always have, no matter how little respect they've earned him from his colleagues.

In classic mystery form, the murderer and motive are revealed at the very end of the book amid a scene of crazy academic chaos unlike anything Nick has ever witnessed or dealt with before. 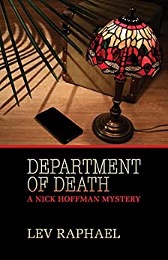 Nick Hoffman has been unexpectedly installed by his dean as chairman of his English department. It's a wildly unpopular choice and Nick is now the focus of more animosity from his colleagues than ever before. He can't seem to make anyone happy and can't get a handle on his myriad new responsibilities as an administrator, a position he never wanted. Tragedy strikes when someone seeking his help is murdered, and Nick becomes a prime suspect. Hounded by campus police, the local press, and social media, Nick wonders if this could finally be the end of his career—and if he can manage to stay out of prison. Department of Death is Lev Raphael's most blistering satire yet of the perversities of academic life.

Every week I hear more stories from friends about academic craziness which is skewered in the Nick Hoffman books which are starting to feel like documentaries!