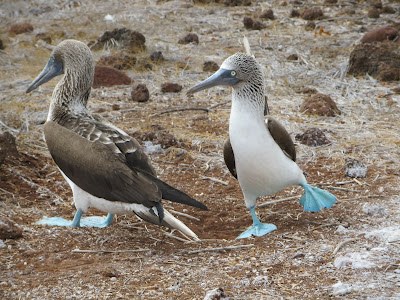 Sharon Marchisello is the author of two mysteries, short stories, nonfiction, training manuals, and screenplays (as well as a blog and book reviews.) Learn more about Sharon and her books at her website.

Setting a Mystery in the Galapagos

For an animal lover like me, visiting the Galapagos was a bucket-list trip. And in 2014, I got to fulfill that dream when my husband and I took a cruise around the islands.

Located 600 miles off the coast of Ecuador, the Galapagos archipelago is 97% national park; humans inhabit only four of its twenty-one volcanic islands. Straddling the equator, the UNESCO site is situated at a point in the Pacific Ocean where three ocean currents collide, which contributes to the diversity of wildlife found nowhere else. And because they’re so isolated, most of the animals have no natural fear of people.

If I’d known I was going to set a book in the Galapagos, I might have been able to write the trip off on my taxes. But I didn’t get the idea until about six months later, when I was driving back from a conference late at night with another author.

As I related an experience that happened to my husband and me on our cruise, she suggested it would make a great opening scene for a mystery. Normally, the guides on our cruise were conscientious about counting heads and watching over all the passengers in their charge whenever we were away from the ship. But on this day, my husband and I left another activity to join a snorkeling excursion already in progress, so neither of the guides assumed responsibility for us.

We were swimming along, marveling at the vast array of underwater life, when I surfaced to see both Zodiac boats motoring back to the ship—without us! I can still feel the panic of being left alone in the middle of the ocean, treading water off the coast of a deserted island.

I waved and screamed, and fortunately, someone spotted me, and one of the boats turned around to pick me up. I didn’t see my husband right away, but I told the guide he was still out there. In a moment, he’d swum up and climbed aboard. All was well.

But what if.... I thought. What if the protagonist’s companion didn’t get picked up? And what if the person was left behind on purpose?

When Secrets of the Galapagos begins, my protagonist, Giovanna Rogers, is snorkeling with her new friend, tortoise researcher Laurel Pardo. The two get separated from the group, and Laurel disappears. And then no one on the ship will acknowledge that Laurel didn’t make it back. 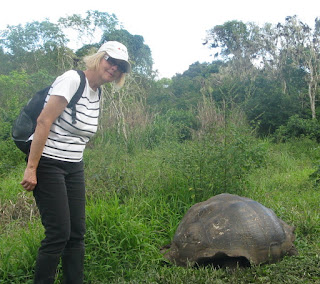 While trying to determine a motive, I recalled a conversation I’d had with one of our guides during a visit to the Charles Darwin Research Station in Puerto Ayora, the largest town on Santa Cruz Island. “I know a secret about Lonesome George,” he said. “But if I tell you, I’ll have to kill you.” Lonesome George was a Galapagos giant tortoise made famous for being the sole survivor of the Pinta Island species. Unfortunately, efforts to breed George were unsuccessful, and the ancient tortoise passed away in 2012.

But what if someone discovered another giant tortoise from a different subspecies also thought to be extinct? And then a tortoise researcher unearthed some information about the animal that certain individuals in the tourist industry didn’t want released?

You’ll have to read Secrets of the Galapagos to find out what happens next. 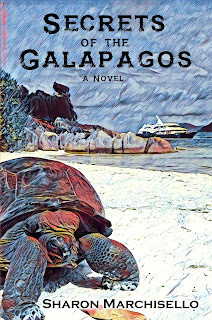 Secrets of the Galapagos

Shattered by a broken engagement and a business venture derailed by Jerome Haddad, her unscrupulous partner, Giovanna Rogers goes on a luxury Galapagos cruise with her grandmother to decompress. At least that's what her grandmother thinks. Giovanna is determined to make Jerome pay for what he's done, and she has a tip he's headed for the Galapagos.

While snorkeling in Gardner Bay off the coast of Española Island, Giovanna and another cruise passenger, tortoise researcher Laurel Pardo, both become separated from the group, and Laurel is left behind. No one on the ship will acknowledge Laurel is missing, and Giovanna suspects a cover-up.

When the police come on board to investigate a death, Giovanna assumes the victim is Laurel. She's anxious to give her testimony to the attractive local detective assigned to the case. Instead, she learns someone else is dead, and she's a person of interest.

Resolved to keep searching for Laurel and make sense of her disappearance, Giovanna finds that several people on board the cruise ship have reasons to want Laurel gone. One is a scam involving Tio Armando, the famous Galapagos giant tortoise and a major tourist attraction in the archipelago. And Jerome Haddad has a hand in it. Thinking she's the cat in this game, Giovanna gets too involved and becomes the mouse, putting her life in jeopardy. But if she doesn't stop him, Jerome will go on to ruin others.

Thank you so much for featuring me today!