Mary Reed and Eric Mayer's Byzantine mystery series relates the investigations of John, Lord Chamberlain to Emperor Justinian. They also write the Grace Baxter series set in WWII England. Learn more about Mary and Eric at their website and blog.

In our Byzantine mystery Six for Gold self-proclaimed epicure Francio nurses an ambition of recreating Trimalchio's Feast, which according to Petronius' Satyricon featured such gustatory delights as dormice sprinkled with honey and poppy-seeds and a wild boar from which thrushes flew out as it was carved.

Francio's project is unavoidably delayed, however, given plague is currently ravaging Constantinople and food is scarce, so two dinner guests are served a bitter salad composed of weeds, followed by the grandly titled Harbour Chicken in Poseidon’s Special Sauce. Which turns out to be boiled seagull in garum sauce (a fermented fish concoction often compared to modern anchovy sauce). Food may be short but Francio's invention is long, given a later meal he hosts features an offering he terms The Wreck of the Ark, describing its ingredients as "a rather mature octopus, a couple of fig-peckers, and an under-nourished partridge"--  not to mention a weasel caught in his garden.

As biographers of John, Lord Chamberlain to Emperor Justinian, we are aware that although responsible for organising complicated imperial banquets, he would just as soon have less elaborate dishes than those offered at Justinian and Theodora's jamborees. His meals at home therefore are simple. He likes hard-boiled eggs, bread, olives, cheese, and fish, especially grilled swordfish. If pressed. he'd admit to a liking for honey cakes. Whatever is on his plate, however, it will be washed down with what his friends habitually deride as ghastly Egyptian wine, a fondness for which he developed during his time in that country.

Researching food for the upper crust (no pun intended) led us to a modern translation of Apicius' first century recipe collection On the Subject of Cooking. The work offers all manner of recipes both rich and plain, and with John's tastes in mind, I'll mention a few of its more homely dishes.

It has been observed fine words butter no parsnips. Apicius provides a recipe for boiled parsnips, the recipe for which directs taking "celery seed, rue, honey, ground pepper, mixed with raisin wine, stock and a little oil; bind this with roux [bring to a boiling point, immerse parsnips] sprinkle with pepper and serve."

Then there's a sweeter Roman equivalent to today's French toast, made by soaking large pieces of crustless "fine white bread" in milk and beaten eggs, frying the pieces, and serving after covering them with honey

Discerning diners doubtless insisted on Lucanian sausages, historically renowned as best in class and still popular today. The instructions are to "crush pepper, cumin, savory, rue, parsley, condiment, laurel berries and broth; mix with finely chopped [fresh pork] and pound well with broth. To this mixture, being rich, add whole pepper and nuts." The recipe concludes by advising carefully filling casing before hanging the sausages up to smoke.

Although the amounts of ingredients are never mentioned, some recipes tending to the exotic are simple enough to make. Consider sea urchins, still popular fare in certain countries. Trimalchio's feast included quinces sporting artificial spines to mimic sea-urchins but Apicius addresses the real  type, advising cooks to put them "singly in boiling water, cook, retire, and place on a platter."

A more extravagant dish caught my eye:  ostrich boiled in a stock composed of "pepper, mint, cumin, leeks, celery seed, dates, honey, vinegar, raisin wine, broth, and a little oil", the liquid to be strained when the bird is done and thickened with roux before adding cut-up ostrich meat to it and sprinkling the concoction with pepper.

I cannot close without mentioning a culinary tip likely familiar to John's elderly cook Peter when he plans to make a batch of honey cakes for his master. "To make honey cakes that will keep take what the Greeks call yeast and mix it with the flour and the honey at the time when making the cooky dough." Oddly enough, although honey frequently appears as an ingredient, no recipe for making honey cakes is given in Apicius' work. Perhaps Peter invented his own.

Profusely illustrated and footnoted, the modern translation of Epicius' work is titled Cooking and Dining in Imperial Rome. It's fascinating reading. Find it at https://www.gutenberg.org/files/29728/29728-h/29728-h.htm 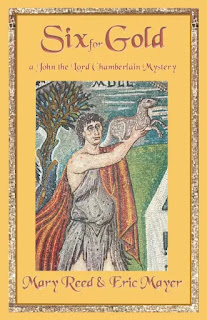 A John the Eunuch Mystery, Book

Why are sheep in the remote Egyptian village of Mehenopolis cutting their own throats? That's the mystery Emperor Justinian inexplicably sends John, his Lord Chamberlain, to Egypt to solve. Mehenopolis is a pilgrim destination, thanks to its ancient shrine to a snake deity.

Among the characters John encounters are a pretentious local landowner battling a self-styled magician for control of the lucrative shrine, an exiled heretical cleric, an itinerant beekeeper, and a disgraced charioteer. Will John uncover what is really happening to these sheep? Are these slayings somehow linked to the murder charge of which John has frantically tried to clear himself?

Thanks for hosting my essay today! It was great fun writing it though it did cause a sudden wish for French toast to emerge...

You're welcome, Mary. Your posts are always so interesting. Come back any time. And now you've got me thinking about French toast!

Cooking ancient foods is wonderful fun. The research into ingredients can yield all sorts of interesting insights. And sometimes one finds something worth adding to the family menu! I look forward to reading your books, Mary.

What, no dormouse recipe?!

Mary, is your WWII series available in the US?

Lynn, thanks for your kind words!

Meredith, I just checked and there is indeed a recipe for stuffed dormice (number 396)! And yes, the WWII series are available in the US. They are published by Poisoned Pen Press.