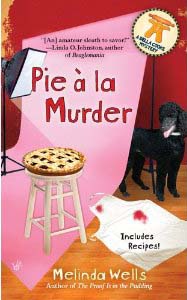 Melinda Wells is the mystery pen name of Linda Palmer, a woman who has led a very diverse life. She’s been a wildlife photographer in Africa, a children's photographer in New York City, a writer for a Daytime TV drama, a produced screenwriter, a producer, Vice President of a Hollywood Public Relations firm, and Vice President of TriStar Pictures. (She says that when she works for a company she has to start as a VP because "I don't have the skills to start lower.") To learn more about Linda/Melinda, visit her website.
Linda/Melinda is offering a copy of one of her Della Cooks mysteries (winner’s choice) to one of our readers. To enter the drawing, simply post a comment to the blog this week. Don’t forget to check back on Sunday to see if you’re the lucky winner. -- AP

Hi, I'm Melinda Wells (aka Linda Palmer), currently writing a series of "culinary mysteries" for Berkley Prime Crime. In 2007, after I had completed a series of four mysteries set against the background of a popular Daytime TV drama, my editor asked if I would like to write a series for them set somewhere in the world of food. They wanted each book to include "cooking, recipes, and murder," with ten recipes at the end of each book. She added, "Because this series will be so different from your first, will you use a pen name?"
I love to cook, so I accepted the challenge eagerly and came up with a new set of characters, a new location and a new name, "Melinda Wells." At the time of my editor's request, I had no idea that there was a category called "culinary mysteries." I hadn't read any of them. But, fortunately for me, there are many people who enjoy reading mystery novels that are food-connected. Now that I've read books by some of the  talented writers in this genre, I can understand why it's a popular category.

My series began with KILLER MOUSSE, published in 2008. I enjoy writing them because they combine four of my favorite things in life: friendship, working at a job one loves, mystery stories, and food. The recipes in the book labeled "Della's" are mine. Other recipes come from friends, each of whom I name. The cake featured in DEATH TAKES THE CAKE (2009), was adapted from a recipe sent to me by Myra Morehouse, who had read and enjoyed KILLER MOUSSE. I had to make a few changes in order for it to become Della's cake—she had to enter it in a competition—but I wouldn't have come up with "Della's Orange Dreamsicle Cake" without Myra's generosity in sharing some of her recipes with me.
My heroine, Della Carmichael, isn't me, but she's the most like me of any character I've ever conceived (except that she's younger and thinner than I am.) She has friends who are dear to her and pets she loves. In fact, the black standard poodle in the series, "Tuffy," is based on my own beloved, now sadly deceased, black standard poodle, Tuffy.
I'm happy spending every day writing about Della and her friends, getting them into—and eventually out of—trouble. And finding new ways for people to murder one another. Personally, I don't like gore—I don't want people to suffer—so my victims are dispatched quickly. The fun I have is with the relationships among the characters, and discovering how Della will solve the mystery and expose the killer.

PIE A LA MURDER, the fourth book in the series, just released. At the moment I'm working on writing book # 5, which will be published in 2012.
To read the first chapters of the first four books—to have a "taste," so to speak—please go to my web site: www.lindapalmermysteries.com. Go to "Book Previews," and click on the book covers. While you're there, I'd like to have you see the two dogs and the cat who are blessings in my life.
Thanks so much for joining us today, Linda. Readers, would you like a copy of one of Linda’s Della Cooks mysteries? Post a comment to enter the drawing. And don’t forget to check back on Sunday to find out if you’ve won. -- AP
Posted by ANASTASIA POLLACK at Thursday, July 14, 2011

I love these types of stories :) I'd love to win a copy of this book! I'm zipping over to check out the first 3 right now.
Hugs and happy writing to you...happy reading for me!
Nancy

Mysteries and food; it doesn't get much better. Your bio sounds as intriguing as your books, Melinda.

I go on mystery binges and think I'm developing a taste for one now. Do any of your mysteries feature creme brulee?

Love culinary mysteries--all that food without the pounds.

The culinary mysteries sound like fun to read and including recipes for readers to try is a bonus--as long as none of the ingredients are along the lines of arsenic.

I started reading culinary mysteries when I stumbled upon Diane Mott Davidson and am hooked. And yours having a standard poodle in them moves it to the top of my list. I love animals and I'm going to love your books. I'm off to Amazon to purchase one.
Thanks!
Patti

Thanks for bring a whole new culinary mystery series to my attention--going to the top of my TBR list. Like most of your readers, mysteries and cooking are my two favorite things.

Love the covers and titles. Cooking is always something to savor and the combo perfect. So appealing and unique. many thanks. Ruth

Interesting and delightful post. Artwork is such a delight for food and mystery to intertwine. Best wishes, Diane

I'm one of those persons who enjoy reading culinary mysteries. Looking forward to reading your series.

I've read the first two books and loved them. I also read all of the books in your previous series. I tried to go to your website but my computer wouldn't let me. I'll try later. In the meantime, I am looking forward to reading the 3rd and 4th books.

There's still time to post a comment to win a copy of of one of Melinda's books. Don't forget to check back on Sunday when the winner's name will be posted.

I've read and enjoyed all the previous books in this series, although I'd rather read than cook. I'm looking forward to the newest book. Please enter my name in the drawing. Thank you.

Please enter me in the drawing for the book. Sounds tasty.

These books sound great, always in the mood for a good fun mystery! Love this blog as well :)

AKU, I'm so glad you're enjoying the blog. Thanks for mentioning it.

Melinda seems to be having some problems posting to respond to reader comments. So she's asked me to post this for her:

Hi, I'm Melinda Wells. Thank you for these wonderful comments. It gives me a fresh injection of energy as I work on writing # 5 in the series. Anne asked about Creme Brulee. In KILLER MOUSSE, Della makes Creme Brulee for Liddy's dinner party, and because she does, that act has a major impact in the climax. Thank you all again!

What a fun idea for a book. Pie and murder? I am so there. Good luck!

I could get hungry just reading the titles. What diet?

Yum. Ten recipes and a murder? Couldn't be better.