Today we welcome the writing team of Mary Reed and Eric Mayer to Book Club Friday. Mary and Eric published several short John the Lord Chamberlain stories in mystery anthologies and in Ellery Queen Mystery Magazine prior to One For Sorrow, their first novel about John. Eight books have now appeared, most recently Eight For Eternity. John's latest adventure, Nine For The Devil, will be published in March 2012. More details of this series and Mary and Eric’s other fiction can be found on their website. -- AP 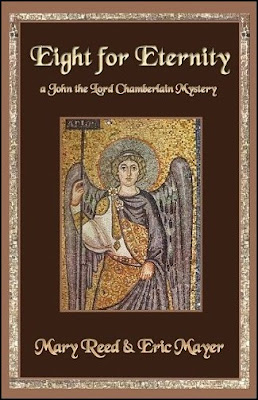 ONE AND ONE MAKE CLUE
It's long been my contention much can be gathered about a person's life and character by observing what's on their bookcase, the contents of their waste basket, handbag, or wallet, and items on the household's shopping list.
Similarly, writers of mystery novels often utilise lists in various nefarious ways.
One of the commonest moves is to hide clues in clear sight in what I term the Poe's Purloined Letter method.
Readers, always examine lists closely.
Why?
Well, here are a few examples with titles footnoted to avoid spoilers, so if the description given doesn't ring a bell don't check the title!
In one adventure Sherlock Holmes specifically declares his hope the contents of a pocket "might help me to form a conclusion". As indeed they do, because the list includes three items revealing the intended crime, while others show the motive. (1) In another Holmes adventure the making of certain lists forms part of the plot. (2)
Descriptions of a setting may also serve mysterious purposes.
For example, in an Agatha Christie work the description of a particular room provides two clues in one location: a specific item that will play a role in the solution (though people under a certain age may not immediately grasp its part when it is explained) and the actual arrangement of these items. (3)
Just to be awkward, the clue-as-item-in-a-list method does not always apply.
For example, a Dorothy L. Sayers novel offers a list on which, given the situation described, an expected item does not appear. (4) In another work she carries out a particularly clever bit of business whereby a location is deduced by comparing a list of the original contents of a pocket and an extra item mysteriously found in it later. In the same novel an inventory is
mentioned and one item is somewhat out of the ordinary given its location -- as the author in fact points out to the reader. (5)
So, readers, next time you see a list, take note. Meantime, another useful thing about lists in mysteries is you can also write blogs about them...
Mary R
Footnotes:
(1) Silver Blaze
(2) The Stock-Broker's Clerk
(3) The Mysterious Affair At Styles
(4) Five Red Herrings
(5) Both in Murder Must Advertise
Thanks for stopping by today, Mary! I’ll never look at a shopping list the same way again. What about you, readers? -- AP
Posted by ANASTASIA POLLACK at Thursday, July 21, 2011

Email ThisBlogThis!Share to TwitterShare to FacebookShare to Pinterest
Labels: Eight For Eternity, Eric Mayer, John the Lord Chamberlain mysteries, Mary Reed, Nine For the Devil, One For Sorrow, writing

Love lists. Used to make them myself all the time, although they never helped me solve a mystery.

John the Lord Chamberlain stories are new to me, but I can't wait to get started.

Anastasia, thanks for the post, and Mary and Eric, best wishes on the success of Eight for Eternity.

I have a list next to me at all times and I agree that you can tell a lot about a person by reading his/her list. But I never thought of it before now. Interesting post.
Patti

Thank you, Liz. It's my contention the mystery reader has to suspect everything, including the pattern on the breakfast china at Lord Muckamuck's country mansion the day after the murder!

Patricia, it's the criminous-plotting mind at work, seeing the connections with lives and shopping lists!

Great post! I am also a list maker, but never thought about including one in a book. Hmmm, I think I'll add that to one of my lists!