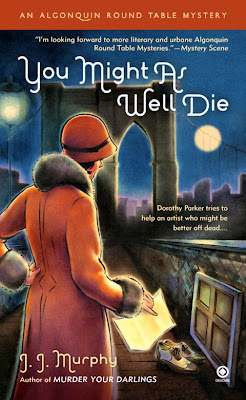 Our guest today is author J.J. Murphy who writes the Algonquin Round Table Mysteries, in which Dorothy Parker drinks, quips, smokes—and solves the occasional murder. Learn more about J.J. at his website and on Facebook. -- AP
The Roaring 20s Are Roaring Back 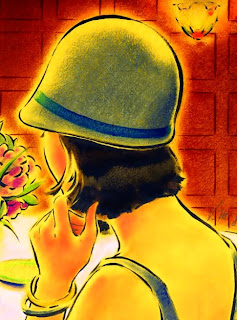 Ain’t we got fun—again? The Jazz Age is coming back into style. Have you seen 1920s-inspired cloche hats in the stores? Or watched the Prohibition-era gangsters and bootleggers of “Boardwalk Empire” on TV? Have you noticed the latest flapper-style fashions from New York designers? Or, perhaps you’ve heard that “The Great Gatsby” will return, with Leonardo DiCaprio in the title role?
Americans are rediscovering a fascination for the decade that gave us the tin lizzy, the speakeasy and the Charleston. This era also gave birth to the Algonquin Round Table. This was a group of witty writers and editors who gathered together daily for lunch at the Algonquin Hotel in New York City, and included such literary wits as Dorothy Parker and Robert Benchley. They’re now known primarily for such quips as Mrs. Parker’s phrase, “Men seldom make passes at a girl who wears glasses,” or Mr. Benchley’s “Let’s get you out of those wet clothes and into a dry martini.”
These two are also the main characters in The Algonquin Round Table Mysteries, a fictional series that finds the clever Mrs. Parker as a wisecracking sleuth and the faithful Mr. Benchley as her lackadaisical sidekick. (In the first book in the series, MURDER YOUR DARLINGS, Dorothy Parker has to prove the innocence of young William Faulkner when a dead body is found beneath the Algonquin Round Table. In the recently released second book, YOU MIGHT AS WELL DIE, Dorothy must enlist magician Harry Houdini to determine why an unlikable artist seemingly committed suicide by jumping off the Brooklyn Bridge.)
With all the talk of the Jazz Age these days, you might need some help interpreting it. So, here’s a short list of some Roaring 20s terms:
• “bee’s knees” – terrific
• “bum’s rush” – getting kicked out
• “ducky” – great
• “get in a lather” – become angry
• “joint” – nightclub or speakeasy
• “on the up and up” – honest
• “snort” – a shot of whiskey
• “vamp” – a seductive woman
• “whoopee” – having fun (and/or having sex)
So, if you have a snort with a vamp at some joint, don’t get in a lather for getting the bum’s rush when they find out she’s not on the up and up.
Thanks for joining us today, J.J. I've always been a fan of Dorothy Parker. What about you, readers? -- AP
Posted by ANASTASIA POLLACK at Thursday, January 05, 2012

Thanks so much for your post. This is my favorite era and I'm a big fan of the Algonquin Round Table and their quips. What a fun idea for a mystery series!
I'm researching moonshine runners right now, but find the whole time period fascinating (here and in the UK). WWI really did a number on morality, politics, and culture;)
Thanks for sharing!

This is such a fun period to write in - I took a stab at it myself (pun intended) by writing a "Side Dish of Death" dinner-party game that I set in 1921 (prohibition & gangsters over dinner). Had a blast playing with the oh-so-colorful vocabulary of the period! J.J. - thanks for posting this. I'm looking forward to reading your books.

I remember reading a biography of Dorothy Parker when I was in high school and I've loved that era every since. The music, the vocabulary, the fashions.... what a unique period of our history. This series is definitely on my book list. Thanks for the great post!

I write about small town 1935 and I cannot wait to read this. Going on my amazon list tomorrow!