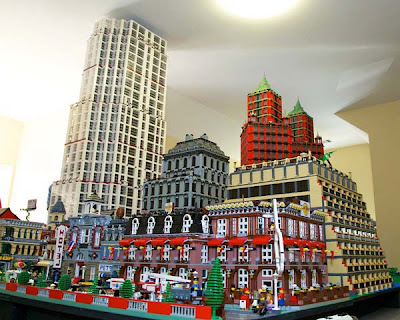 As I’ve mentioned many times, there are all different types of crafters, and many crafts take little or no talent. Then there are the crafts that take a special kind of talent, but employs a skill that doesn’t involve a glue gun or an embroidery needle. Some crafters work with beads, some with clay, some with paint, and some with…LEGOs.

Bet you never thought of those little colored bricks as a craft, did you? But why not? Creating with LEGOs is still creating. Crafting is crafting, no matter what the medium. 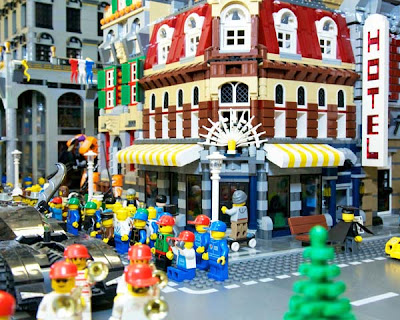 Over Christmas Lois Winston (the author who writes those books about me,) visited family in Georgia. While reading the newspaper one morning, she learned about a Lego exhibit at a Honda dealer in Roswell, a town about an hour north of Atlanta. Being a fan of LEGOs, she had to check out the exhibit. So the entire family piled into the car and drove over to Honda Carland.

Once there, they found a 15 foot tall cityscape made from over half a million LEGOs with 1500 LEGO figures, including Santa Claus and characters from Star Wars, Pirates of the Caribbean, and Harry Potter. The cityscape was created by Harry Nijenkamp and his son Austin, and they estimate it took over 500 hours to complete. Along with the skyscrapers and an amphitheater, there’s an oriental garden and a DragonCon parade that weaves through the city streets.
So the next time you’re thinking about crafts, don’t forget to think a bit outside the box. Anyone can craft. And with any medium.
Post a comment to enter the drawing for books plus a special gift from our Book Club Friday author this week. -- AP
Posted by ANASTASIA POLLACK at Sunday, January 15, 2012

My son loved his Legos when he was little. Now there's a huge Legos store in NYC where you can purchase individual lego pieces of all shapes and sizes. And candy, shaped like legos, that can actually be snapped together. He would have been able to spend hours in a store like that. It always amazes me what can be created with those little plastic pieces!

I love Lego! I keep a box on my desk and I play with it when I am on the telephone.
Nellie's Mom

wow i now they have the lego co come to branson mo and they set up dispaly in the village for the kids
we were there about 1 year ago and the kid knock down a horse and boy t hey went all over now all t he display are in plastic case the horse was of roy roger horse and they took 15 hr tore build it
but i love that you can go into place and explore we do it a lot while traveling
desi the blonde@msn.com

Thank you, Carolyn, Jane, Cat From Hell, and desitheblonde! It's amazing how many people love LEGOs, isn't it?

Who would have imagined. Nice pictures.