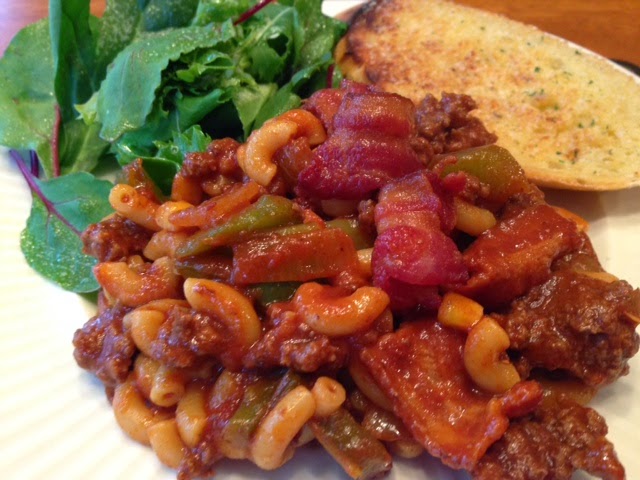 June Gillam is a poet and novelist who lives in the Sierra Nevada foothills and teaches writing at a California community college. She loves to cook and sprinkle food and beverages into her Hillary Broome suspense novels, House of Cuts and House of Dads. Set partly in Ireland, the third in the series, House of Eire, will be released in 2015. Learn more about June and her books at her website.

Are you tired of turkey and ham after the holidays?

Consider this easy and delicious ground beef, macaroni, and tomato sauce dish—make ahead and it’s even better the next day. My Irish mother used to make, it and we called it goulash in our family. Years later, exploring my father’s Czechoslovakian heritage, I ate at Little Prague Café in San Francisco. The chef was kind enough to share his recipe for authentic Czech goulash. I was shocked to learn it contained mostly cubed pork, an equal amount of onions, and its red color came from plenty of paprika instead of tomato sauce.

In House of Dads, the second book in my Hillary Broome suspense series, old Aunt Helena cooks a mild goulash the same way my mother, did but Aunt Helena becomes offended when her recipe gets superseded by her niece Violet’s cooking up a different authentic Czech-style goulash. House of Dads reveals the impact of Violet’s dangerous alternative to my mother’s mild and delicious dish!

Tasty and Mild Goulash
Serves 4-6. Good to double for leftovers.

This takes an hour and a half to prepare from start to finish. You can add more or less of the ingredients, to taste.

Ingredients:
A half pound bacon
One yellow onion, chopped
One green bell pepper, chopped
One teaspoon garlic salt
One pound lean ground beef
Two tablespoons chili powder (or more to taste)
One cup of frozen or canned corn
Two or three 8 oz. cans Del Monte tomato sauce
One cup of water
One pound package of small elbow macaroni, cooked and drained (or add two extra cups of water and throw dry macaroni into the pot to cook along with the rest of the ingredients)

In a large skillet or Dutch oven, fry bacon until crisp. Remove bacon and set aside.

In the remaining grease, fry the onions and bell pepper, sprinkled with garlic salt. When the veggies are soft, add in ground beef. Add chili powder and fry on high heat until beef is browned.

Add corn and tomato sauce plus water and simmer for ten minutes.

Add cooked macaroni and bacon and simmer all for an hour, stirring very gently so as to not mash up the macaroni.

Serve with garlic bread and green salad. Yum! Great the next day. 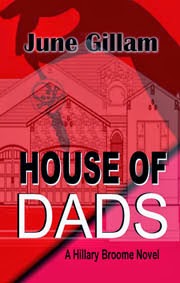 House of Dads
When a powerful California developer collapses at a funeral, Hillary Broome's caught in a network of jealousy, greed and secrets that could topple financial institutions and destroy families. In the midst of deciding whether to elope with detective Ed Kiffin, she's forced to investigate suspected foul play from disgruntled homeowners, mortgage bankers, and family members spiraling downward into homicidal madness that puts other lives in danger, as well.

From the picture, this dish looks like a yummy treat on a snowy day! Happy Holidays!!

Yes, it's a wonderful change of pace from the tastes of the holidays.

Sharing this goulash recipe with my niece as a wedding shower contribution as requested on the invitation.

Great post on "COOKING WITH CLORIS--GUEST AUTHOR JUNE GILLAM AND GOULASH RECIPE". As a professional chef i have to appreciate your work. Keep Posting useful posts like this. Keep in touch with my websites- cooking courses in dubai | cooking institutes dubai