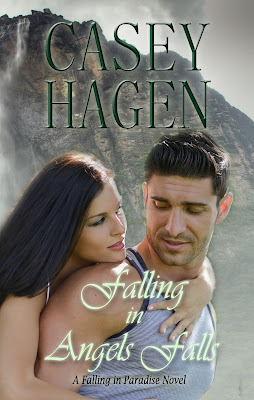 Casey Hagen is a contemporary romance author who believes in doing things her way, no matter what. A born-and-raised Vermont native, she claims to have Ben & Jerry’s in her heart and real Vermont maple syrup pumping through her veins. Learn more about her and her books at her website.

Here I had written this book, a book I had been reworking for fifteen years…the book of my heart.

I’d enlisted eight beta readers to review. Armed with their comments and a good dose of stubborn, I reworked it. I’d polished it as much as I could and then I’d run it through four rounds of edits with four different editors. I had reread it at least thirty times, so many times I wanted to set it on fire. Then I shook in my slippers at the thought of putting it out there for the entire world to see.

With a taboo hero and heroine who had been high school teacher/student carrying on an affair the summer after graduation and then reuniting eight years later, I knew it would be a hard sell to a traditional publisher. A writer friend, both traditionally and indie published, offered to read my first fifty pages. Sure enough, she came back and said, “We should get together and brainstorm a safer back-story.”

But, but, but…I don’t wanna. It’s mine and you can’t make me. After raging a bit, stomping my foot in frustration hundreds of times, I put on my big girl pants and thought it through. Okay, she was probably thinking in terms of traditional publishing. So that meant I needed to go indie, right? I mean, that had to be my only option.

Here’s the thing…I like to buck the system. I like challenging the norms. I like leaving an impression, and what better way to shake things up? So, when the Romance Writers of America 2015 conference rolled around, I signed up to pitch my book to editors and agents. What’s the worst they could do? Say no and I’m out nothing.

On pitch day, I arrived at 8AM and didn’t leave until 5PM. I picked up five additional cancellations. I pitched seven times and had six requests for full manuscripts.

We won’t talk about pitch #7. I might have fought with the editor…a little bit, but she made someone cry so…she deserved it.

I was rejected six times, but I did not receive a single form letter rejection. Every editor/agent had scanned my profile/page on Facebook, checked my Twitter, and scoured my website. So, although I had been rejected, they had been interested.

Every last one thought I had something, but every last one also knew their publishing house wouldn’t allow it or in the case of the agents, they would have a hard time placing it with a publisher. They all advised me to keep doing what I’m doing. Keep building my following. Take my story and go indie.

Riding high on their praise, I did just that. The book sold okay. In all fairness, probably my fault. Marketing is the Devil! Then, a well-known author opened a publishing house and put out a call for submissions. The book could already be indie published. My eyes slid to a copy of my book baby, Sunset at Lake Crane. I queried the editor and received a request for the book. Then, I got an email telling me the book is good, but it could be great.

I was sent a list of changes they wanted. The biggest: instead of my heroine depending on her own bravery by making the choice to return to her hometown, consequences be damned, I was to make it so she was tricked into returning home. Basically I needed to turn my brave, smart heroine into a blind idiot.

I made most of the changes, but they were minor. I did not change my heroine. Some things just aren’t to be compromised. I sent my revisions with an explanation as to why I would not change her circumstances.

I got the inevitable, “Thank you, but no thank you.”

I was back to doubts and insecurity. Because I’m a glutton for punishment, I decided to enter the book in a contest. I dropped off the books at the post office, went to my car, then went back into the post office and asked if I could have the package back. They said no. Pesky federal regulations and such.

I wound up making the finals against two traditionally published books. Color me shocked…and terrified. But validated. And in October, I won that contest! Moral of the story: Never give anyone the power to make you question your story as I questioned mine. Write fearless. Go forth and be awesome.

Falling in Angels Falls
Alexa Dayne shocked everyone by refusing to join the family bakery business. She’s worked hard to prove that owning her own salon in upscale San Francisco is more than just a dream; it’s her passion. After years of round-the-clock work, Alexa craves both an escape and a new challenge. She’s determined to find both—in the wilds of Venezuela at Angels Falls, the largest waterfall in the world.

Ben Marx is running from brutal memories. A career soldier turned entrepreneur, Ben has slaved to make Steel Force Adventures a reality. On the cusp of success, he’s approached by a long-legged vixen seeking a guide through the Venezuelan jungle to Angels Falls. Her fearless determination is proof enough she’ll make the dangerous trek alone if he refuses.

The Angels Falls journey is one of renewal for Alexa and Ben. But when passions flare and hidden motives are revealed, the flames of heart-wrenching pain forge bonds between them—bonds destined to be tested by life’s harsh realities . . . after Angels Falls.