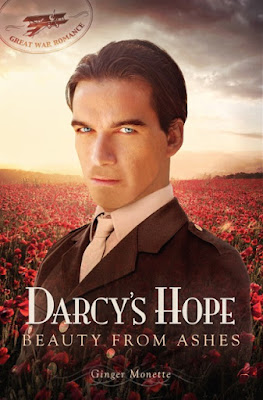 Award-winning author Ginger Monette enjoys dancing on the treadmill, watching period dramas, public speaking, and reading—a full-length novel every Sunday afternoon. Learn more about her and her books at her website.

Is Downton Abbey a Copycat of Pride & Prejudice?

One Sunday night while watching season 2 of Downton Abbey, it dawned on me: Downton Abbey is a copycat of Pride & Prejudice! Now, whether Julian Fellowes really did look to Jane Austen's classic as inspiration, I cannot say, but let's look at some of the similarities.

A houseful of daughters with no heir
Both storylines are built on the premise of impending doom due to the family's misgivings about the unfamiliar heir. In Pride & Prejudice, Austen placed a cast of five daughters at risk of being “thrown to the hedgerows” should their father die before they are wed. Julian Fellowes chose three sisters for Downton Abbey's cast, although they seem more concerned for the future of their physical home and the general uncertainty brought about by the new heir rather than their personal futures.

Similar characters
Both Austen and Fellowes chose a heroine who is an “obstinate, headstrong girl.” Downton Abbey's Lady Mary Crawley was never one to hold her tongue. And certainly Austen's Elizabeth Bennet never hesitated to voice her opinion on everyone and everything!

Perhaps the most similar characters in the two stories is a domineering matriarch. The outspoken dowager Lady Grantham is one of Downton Abbey's most colorful characters. But I believe Fitzwilliam Darcy's imperious aunt, Lady Catherine de Bourgh, could have given even Violet Crawley a run for her money!

An attempted elopement
Both dramas include an attempted elopement that spawns uproar in the respective families. Readers are aghast when Austen's rogue, George Wickham, runs off with Elizabeth's younger sister, nearly ruining the Bennet family's reputation. Conversely, Downton Abbey fans cheered when daughter-of-the-manor Lady Sybil and chauffeur-servant Branson finally kissed. But their pairing and attempted elopement was scandalous nonetheless, and sent Sybil's sisters hurrying after her and their father into a thunderous outage.

Both Austen and Fellowes used the scandalous union as a clever plot device to not only create drama, but to keep audiences on the edge of their seats. Would the scandalous pair remain together? How would the scandal drive future storylines and affect the other characters?

A grand estate
In both Pride & Prejudice and Downton Abbey, a grand house is a silent, yet central character. For nearly 200 years women have been swooning over Pemberley, the estate of Austen's heartthrob Fitzwilliam Darcy. And Highclere Castle's gold rectangular structure topped with corner towers and spires is instantly recognizable as the Crawley's beloved family home on Downton Abbey.

These lavish homes set our hearts to dreaming and become a beloved character in and of themselves. But the Austen/Fellowes parallels don't stop there. It is worth noting that the name Downton Abbey is suspiciously similar to Donwell Abbey, the name Austen chose for George Knightley's estate in her classic work, Emma.

An entailed estate with an “unsuitable” heir
In Pride & Prejudice, the unsuitable heir is the obnoxious rector William Collins, whose marriage proposal to Elizabeth Bennet is flatly refused. In Downton Abbey, Matthew Crawley is a dashing, but lowly solicitor. And although both “unsuitable heirs” go on to propose to other women, in the case of Downton Abbey, viewers are thrilled when the love struck hero and heroine eventually marry.

High society characters falling in love with, well, those not so high society
Fitzwilliam Darcy is downright disgusted with himself for falling in love with Elizabeth Bennet, a woman so decidedly beneath him. And in Downton Abbey, Lady Mary Crawley is incensed that a man in trade will inherit her family home. But in the end, fans are delighted when love wins out for both couples.

We may never know if Julian Fellowes was inspired by Jane Austen, but certainly in both cases, the premise has enchanted millions and proven to be a blockbuster success in both literature and film.

Darcy's Hope ~ Beauty from Ashes
A Pride & Prejudice Great War Romance (Volume 1)
Escape to the era of Downton Abbey and experience all the drama of World War 1 alongside literature's iconic Elizabeth Bennet and Fitzwilliam Darcy. You'll watch their tender love unfold as they learn to work together and reconcile their differences at a field hospital only miles from the Front.

1916. World War 1 has turned French chateaux into bloody field hospitals, British gentlemen into lice-infested soldiers, and left Elizabeth Bennet's life in tatters. Her father is dead and her home destroyed. Never again will Elizabeth depend on a man to secure her future! But when an opportunity arises to advance her dreams of becoming a doctor, she is elated--until HE arrives....

Heartbroken. Devastated. Captain Fitzwilliam Darcy is left rejected by the woman he loved and reeling from the slaughter of his men on the battlefield. "Enough!" Darcy vows. "No more sentimental attachments!" But arriving at a field hospital to pursue a covert investigation, Darcy discovers his beloved Elizabeth training with a dashing American doctor and embroiled in an espionage conspiracy. With only a few months to expose the plot, Darcy is forced to grapple with his feelings for Elizabeth while uncovering the truth. Is she indeed innocent? Darcy can only hope....

Note: Darcy's Hope has a happy ending but continues in Darcy's Hope at Donwell Abbey.  In the sequel, readers will experience the full resolution of the mystery, and our beloved couple's love will face a new, tragic test.

Thank you, Lois, for hosting Darcy's Hope on your blog today!

Ginger, we think alike. I made similar comparisons between "Downtown" and "Pride" to family and friends. Few agreed with me. Thanks for the post, and have a great weekend!

Indeed! When I've pointed out the similarities, most people say, "Oh! You're right! They ARE similar...."

On another note, I just saw that a Downton Abbey movie may be in the works! http://bit.ly/2i0yhwh