Sandra Schwab is an author, artist, and translator with a PhD, a sketchbook, and a very large library. Since the release of her debut novel in 2005, she has enchanted readers worldwide with her unusual historical romances. She lives in Frankfurt am Main, Germany. Learn more about Sandra and her books at her website. http://www.sandraschwab.com

Back in the summer of 2014, I joined a combo on Twitter where readers talked about the relative lack of romances set in Ancient Rome. I mentioned that I happen to live near a former border of the Roman Empire, the Upper Germanic Limes—and the next thing I knew, I had somehow been talked into writing a romance set in Ancient Rome. When I had only ever written historicals set in the Regency era or the Victorian Age. Splendid.

What do you do in such a case, apart from buying oodles of new research books? You go on a field trip! Luckily, I don't just live near a former border of the Roman Empire; more importantly, I live near a reconstructed Roman fort.

The Saalburg lies on the crest of a range of hills called the Taunus, and along those hills ran the border, which at first was nothing more than a series of watchtowers connected by a path. It was the Emperor Hadrian who ordered the border to be strengthened by a wooden palisade (~ AD 130). Around the same time, the small timber fort on the site of the Saalburg was replaced by a larger fort with stone walls.

The Saalburg has the same basic layout that can be found in all forts and fortresses across the Roman Empire: The headquarters building, the principia, that also houses the shrine of the standards, stands in the middle of the fort, along with the praetorium, the residence of the commander. Granaries and workshops are close by, with the wooden barracks typically situated in the front and back of a fort. Tugged along the ramparts, you could find bread ovens as well as lavatories. Some forts also had a hospital and a bathhouse; however, in many cases, the latter could be found outside the fort itself and was part of the vicus, the civilian settlement next to a fort. The vicus housed the families of the soldiers (who couldn’t legally marry, but often entered informal connections) and also included the workshops of craftsmen, eateries, shops, and temples.

Living at the edge of the Roman Empire did not mean that you had to go without niceties. Finds from the Saalburg, which are exhibited in the reconstructed granaries, include pretty leather shoes, beautiful brooches, jewelry, and lovely tableware, among other things.

Excavations at the Saalburg started in the mid-19th century—before that time, the locals used the site as a stone quarry—and the first phase of the reconstruction lasted from 1897 to 1907. The Kaiser himself supported the project, and while this was no doubt beneficiary, he also influenced aspects of the reconstruction. The most obvious example of this is the legionary eagle standard in the shrine of the standards: Like most other forts along the borders of the Roman Empire, the Saalburg only ever housed auxiliary troops (which were recruited from inhabitants of the provinces) rather than a legion (soldiers serving in the legions were all Roman citizens).

Moreover, new research in the 20th and 21st centuries has proven some of the assumptions made during the first phase of reconstruction to be incorrect. Thus, we now know that the defensive walls as well as the stone-buildings in the fort would have all been plastered white with mortar seams painted on in red. The whole effect must have been striking!

I made the Saalburg the setting of my second Roman novel, Eagle's Honor: Ravished, but it wasn't just the museum itself that inspired me. There are numerous workshops and festivals throughout the year where visitors can learn many more details about Roman everyday life. Last year, I attended a Roman cookery workshop… 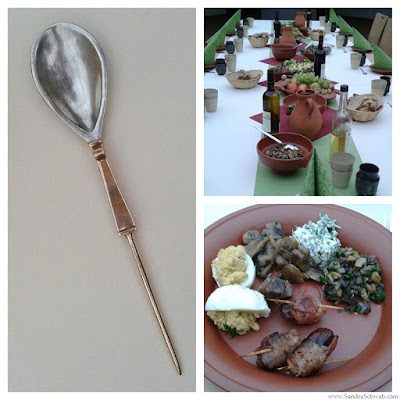 …and earlier this year, I attended a Roman market at the Saalburg, which also included a military show. Very inspiring indeed! 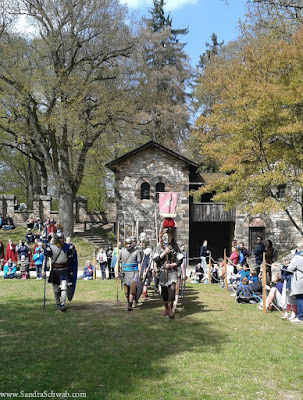 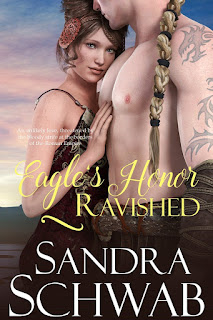 Eagle’s Honor: Ravished
A barbarian warrior, an enemy of Rome.

A sheltered young woman, the daughter of a Roman officer.

An unlikely love, threatened by the bloody strife at the borders of Roman Empire.

AD 190: When a fever ravages her father’s fort and kills her family, Livia has to leave Britannia behind and make a new home for herself in Rome. Lost in a world of grief, she finds little delight in the glittering capital of the empire. Nothing can penetrate the grey fog of her grief—except for the cool blue eyes of the slave Leontius, a barbarian warrior, a former gladiator, a man she ought to fear. And yet, she cannot help but crave his touch, even though he is an enemy of Rome; even though, should he ever manage to flee, he would unleash the anger of his tribe upon the border of the empire.

This looks like enormous fun. Next time I'm in Germany, I'll definitely have to check this out. The book looks like fun, too!

Anne Louise, it's my favorite open-air museum! :-) It's a great place to visit even when there are no special events, but when there *are* special events... OH MY! Apart from the Roman market, they also hold a Roman food festival once a year, and it's the best thing ever! You can try various Roman dishes (for free!), buy Roman bread (which is super delicious) (and the advantage of *modern* Roman bread is that it comes without the original's stone dust that slowly destroyed people's teeth), Roman sausage, and Roman wine (mulsum - white wine with honey - is delicious!).