#CRAFTS WITH ANASTASIA--ANYONE CAN CRAFT 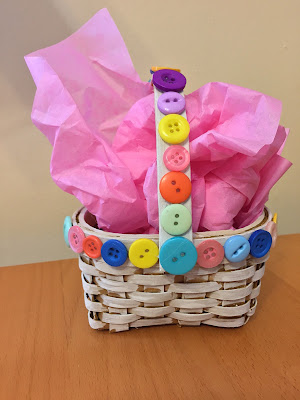 I’m always amazed when people tell me they don’t craft because they have no talent. The beauty of crafting is that anyone can do it, talent or no talent, depending on the project. Just as you wouldn’t pick up a paint brush for the first time and expect to recreate the Mona Lisa, you don’t start crafting projects meant for experienced crafters. You begin at the beginning. Do that, and your confidence will grow with each project, and you’ll begin to challenge yourself, moving from beginner projects to intermediate projects to advanced project.

If you’re a frequent visitor to this blog, you know that I’m a big fan of buttons as a crafting medium. Who doesn’t have a tin or box or jar of miscellaneous buttons squirreled away somewhere in the house? Maybe you inherited them from your grandmother or mother. Maybe they’re simply all those extra buttons that are pinned to clothing you’ve purchased over the decades. I love crafting with these buttons. You can turn them into anything from jewelry to home dec items.

By the way, did you know that the button was originally created for ornamentation, not as a fastener? Primitive buttons made of shell, bone, wood, and metal have been found dating back to 2000 BC. However, evidence of buttons being used as closures is not found until sometime around 1200 AD. By the middle of the 13th century there are references to button makers in the laws governing French craftsmen guilds. (Bet you weren’t expecting a history lesson when you started reading, were you?)

So back to crafting…the photo of the button necklace is a project that requires a certain amount of skill. Although it’s a simple project if you know how to crochet, it’s intimidating for someone who doesn’t crochet.

Now take a look at the basket featured above. Cute, isn’t it? And you know what? It’s a project that’s easy enough for a child. So don’t be intimidated. Pull out your stash of buttons, and follow the simple directions below.

Note: I made a group of these baskets as party favors for a shower and filled them with candy. Because I was going for a “shabby chic” look, I dry-brushed the paint so that it didn’t entirely cover the basket. If you want an even quicker craft, leave the basket unpainted.

1.  Paint the basket with your choice of color. Allow to dry.

2.  Using a glue gun or appropiate glue, glue buttons around the rim of the basket and handle.

Could it get any easier?
Posted by ANASTASIA POLLACK at Monday, July 24, 2017

Not only would the basket make a great favor, but a good project for an elementary school Art class! Thanks for the post.