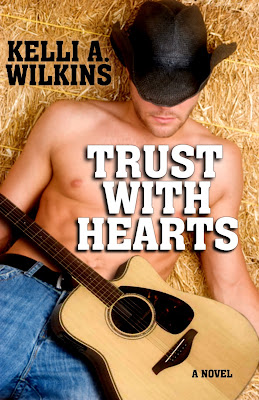 Kelli A. Wilkins is an award-winning author who has published nineteen romance novels in various sub-genres, 100+ short stories, and five nonfiction books. Today she shares a look at the making of her latest contemporary romance. Learn more about her and her books at her website and blog.

Readers are always curious about how books “happen” ‒ how do they start out as a random idea and become an actual book filled with great characters, drama, and sizzling love scenes? The answer varies, and each novel comes to me in a different way.

So how did Trust with Hearts come about? Is the sexy and sultry Curtis based on a particular country music celebrity? Here’s the scoop…

The idea for Trust with Hearts came to me before a country music concert. I was sitting in the front row before the show started, when all of a sudden the whole plot and all the characters jumped into my head. Naturally, I started scribbling down notes (on the back of an envelope, of all things!) before the house lights went down.

Although inspired by real-life, the character of Curtis isn’t based on that one particular country music superstar – rather, he’s a blend of three or four cowboy-hat-wearing singer/songwriters. Elements of the “inspirational” singer are there, but I used my imagination to fill in background details and invented whatever else I needed to make the story work.

Trust with Hearts is a bit different from my other romances in that it has a more “traditional” romance novel feel – but still contains plenty of heat. Although Sherrie and Curtis are attracted to each other, they’re total strangers and are hesitant about getting involved in a relationship. They’ve both been unlucky in love, and aren’t sure if giving their hearts away is even worth the time or trouble.

The book gives them the whole summer to get to know each other. Readers peek into their troubled pasts and follow along as Curtis and Sherrie heal their hearts, love, and learn to trust again.

The subplot of the book – Sherrie’s devotion to save Kitty Corner – was crucial because I wanted to give her a purpose, something to build her self-esteem. Sherrie’s cat adoption project lets her help unfortunate cats that need rescuing and good homes. It parallels how Dave takes Sherrie in (aka “rescues” her) and gives her a second chance at a new life.

And, on a more personal note, giving Sherrie the “job” of helping cats allowed me to make a social/personal statement. I’m a cat person, and I’ve written three cat care books. I always advocate adopting pets (of all kinds) from shelters and giving them a real home. (Would you want to live out the rest of your life in a wire cage?)

Back on topic: Knowing how I often write sequels, a reader asked if there will be another book following up Trust with Hearts. Will Dave get his own story?

I do have an idea for a sequel in mind. What if Curtis’s cousin Jen suddenly had to move in with Dave? Hmm… I already have a plot brewing in the back of my mind, so if readers would like to see a follow-up story, let me know!

And here’s a little-known fact: Once upon a time, Trust with Hearts had an entirely different ending. Curtis and Sherrie were driving back to Dave’s house when they got into a car accident. The Ventura was demolished, Sherrie was thrown clear, but she had to go back into the burning car and rescue Curtis.

I opted to delete the “car wreck” chapter after several people told me it felt too “tacked on” and was depressing. This version of the story has a new epilogue, and readers can see that Sherrie and Curtis are certainly living happily-ever-after.

Trust With Hearts
After a bitter breakup, Sherrie Parker seeks refuge at her cousin Dave’s house in rural West Virginia. Early one morning, she runs into Dave’s other houseguest, a singer named Curtis Taylor. The last thing Sherrie wants is to share living quarters with a country music crooner – even if he is sexy, in a cowboy sort of way.

Thrown together by circumstances, Sherrie and Curtis get off to a rocky start, but soon discover they have more in common than they ever imagined. Unable to fight their growing attraction, they give in to their desires and start a sizzling summer romance.

Everything is perfect between them until Sherrie discovers that Curtis is keeping secrets from her – and his biggest secret of all will change everything. Can their newfound love survive, or will destiny keep them apart forever?

Thanks for letting me share my thoughts with readers!
-Kelli