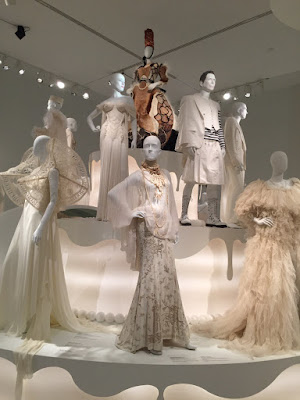 Two weeks ago I talked about an interesting sculpture I recently came across in front of one of the buildings at the Montreal Museum of Fine Arts. Today I’d like to tell you about one of the exhibits inside the museum. Love is Love is an exhibit of wedding gowns by French fashion designer Jean Paul Gaultier. You may not be familiar with Gaultier, but you probably know some of his work. He’s the guy who created that famous—or was it infamous?—conical bra for Madonna. 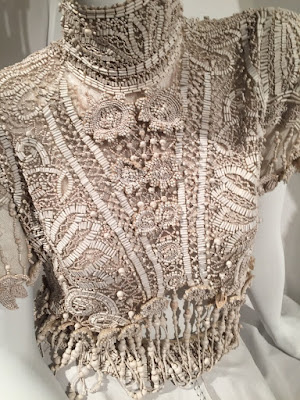 This exhibit is a bit gender-bending; the title references the 2015 legalization of gay marriage in the U.S. Some might feel uncomfortable with that, but truthfully, it wasn’t until I started reading about the exhibit afterwards that I became aware of the political nature of the collection. For me it was all about the beauty of each garment. 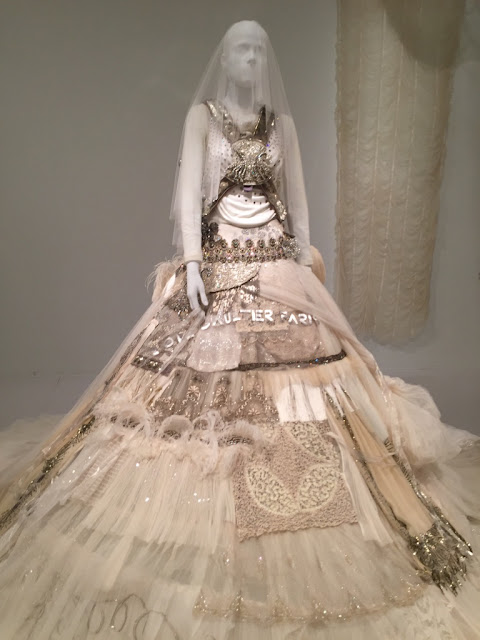 The gowns, thirty-six in all, were created over the last twenty-six years. As someone who has spent many years designing needlework, I was totally blown away by this exhibit. The lace! The beadwork! The crystals! The bling! Wow! One was more stunning than the next. This is haute couture at its haute-iest. 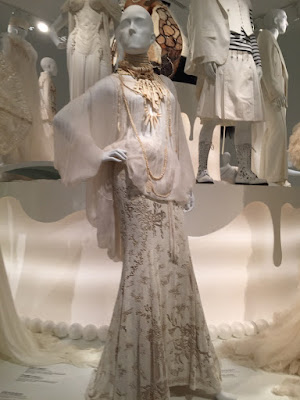 The centerpiece of the show is a “cake” of mannequins, three with computer-animated faces projected onto them. They speak at regular intervals. One is of Gaultier himself, greeting the public as they enter the exhibit. 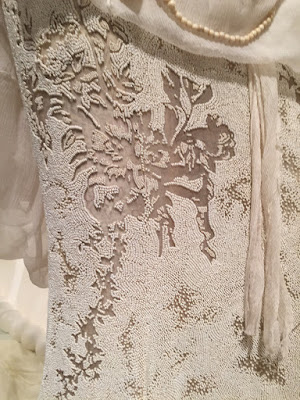 The room is drenched in light, something you usually don’t experience in museums because over time, constant exposure to light will fade and damage fabrics and paintings. The brightness of the room enables viewers to really see the fine detail and workmanship in each garment. The dresses in the exhibit were created for a few minutes exposure on a fashion catwalk, but each took as many as nearly 500 hours to create. 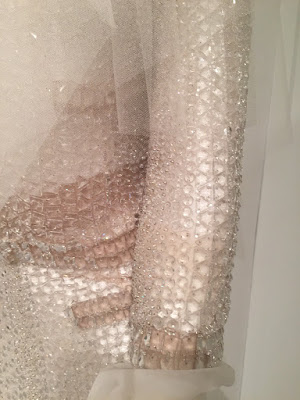 The exhibit runs through Oct. 9th. If you happen to find yourself in Montreal, you should make a point of seeing it. My photos don’t come close to capturing the true beauty of the dresses.
Posted by ANASTASIA POLLACK at Thursday, September 07, 2017

Amazing. Gives new meaning to "the devil's in the details".

It certainly does, Sandy! Thanks for stopping by.

Hard to imagine how much some of those dresses...no, not cost...weigh!

Not to mention how many hours went into crafting each one!