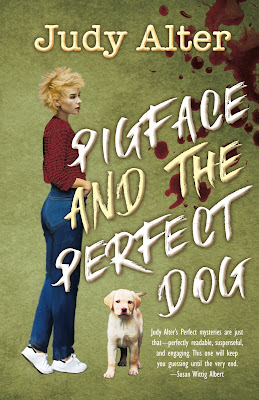 Mystery and historical fiction author Judy Alter has been a frequent guest at Killer Crafts & Crafty Killers, but she’s never sat down to do an interview with us before today. Learn more about Judy and her books at her website.

Where do you write?
I write at the desk in my cottage. Can’t write anywhere else, except for children’s homes when I’m visiting. Can’t write in coffee shops, libraries, etc.

Is silence golden, or do you need music to write by? What kind?
Prefer silence. If I’m working on the novel-in-progress, I want quiet. If I’m doing publishing chores, etc., I may have TV on.

How much of your plots and characters are drawn from real life? From your life in particular?
My historical fiction has always been based on the life of one specific person. My daughter called my first mystery “highly autobiographical,” but the more I’ve written the more I’ve gotten away from incidents from my life and news clips, gone from real life to imagined lives.

Describe your process for naming your character?
Naming a character is really hit and miss. Sometimes I consult lists of ethnic names but I often just go with how it sounds to my ear. I have learned the hard way not to begin many names with the same alphabet letter or use names that sound alike. My biggest problem with a series is forgetting the name of a character and changing it from book to book.

Real settings or fictional towns?
Settings for my mysteries are drawn from real life—with the Kelly O’Connell Mysteries, the setting is an historic neighborhood close to where I live; the Blue Plate Café is a small-town café I visited frequently while staying with friends in East Texas. I find real settings help me with details that make my fictional setting real to readers.

What’s the quirkiest quirk one of your characters has?
Quirkiest character- Pigface from the current novel wins. Here’s how Susan describes him: “The man glared at her, beady eyes blazing out of a puffy, pale face beneath a balding head with the remaining hair pulled back into a sparse ponytail.” He lives up to his nickname throughout the book—and gives pigs an unfair reputation.

What’s your quirkiest quirk?
My quirkiest quirk – my daughter says it’s keeping my cottage too warm, not using the a/c enough in the summer. I say, living in Texas where food is heavily spiced and peppers are plentiful, it is that I don’t like spicy food or peppers in any shape or form.

If you could have written any book (one that someone else has already written,) which one would it be? Why?
There are several books I wish I’d written. One is Wallace Stegner’s Angle of Repose. Another is Elithe Hamilton Kirkland’s Love is a Wild Assault, which a book critic friend assured me is not a very good book. But that was when I was a new writer, and I admired the use of history. I should go back and read it again. These days, I wish I wrote serious and complex mysteries like those of Deborah Crombie.

Everyone at some point wishes for a do-over. What’s yours?
I’m not sure, because I’m fairly happy with the life I have and ecstatic about my children and grandchildren. But sometimes I wish I had trained as a chef when I was young and strong enough. Then I read some chef-written memoirs and realize what a hard life it is.

What’s your biggest pet peeve?
My pet peeve is grammatical mistakes. I am particularly undone by the misuse of “lay” and “lie.”
You’re stranded on a deserted island. What are your three must-haves?
I’d have chardonnay, chocolate, and lots of mysteries to read. Could I sneak tall, dark and handsome on there, too?

What was the worst job you’ve ever held?
The worst job I ever had was writing advertising copy for a company that made DIY leather kits, and I fully realize that if that’s the worst, I’ve been darn lucky.

What’s the best book you’ve ever read?
After a lifetime of good books, I won’t go there. Can’t begin to think of only one candidate.
Ocean or mountains?
Choice between ocean or mountains is hard. I’m not really a water person—boating, swimming, etc. don’t hold much appeal. But some of the happiest moments of my life were spent sitting on a sand dune staring at Lake Michigan (okay, not an ocean but as one of my daughters discovered to her amazement, you still can’t see the other shore). I’m also not much for rugged mountains, but I love the gentle mountains like the Smokies.

City girl/guy or country girl/guy?
City girl, raised in Chicago, lived in Fort Worth over 50 years. A country get-away sounds great, but I’d need company—and chocolate, chardonnay and books. And I’d get restless after a while.

What’s on the horizon for you?
I’m 79 years old, so I don’t know how far away the horizon is. My eleven-year-old grandson for some reason asked me recently what my last book would be about and when I was going to write it. Thanks, Jacob! I told him I’m not thinking in those terms. I plan to keep writing my three series, so right now I’m working on a Blue Plate Café mystery, tentatively titled Murder at the Bus Depot. After that I’ll go back to Kelly O’Connell in Fort Worth. And I’m not talking about it much, because it’s liable to be years before I get it done, but another cookbook is creeping into my computer. I’ve done three other food books, one a cookbook/memoir. This is tentatively titled Gourmet on a Hot Plate and is about cooking in a tiny house in a tiny kitchen.

Anything else you’d like to tell us about yourself and/or your books?
I started writing short stories at the age of ten, sent one to Seventeen Magazine when I was in high school, and it came right back. I majored in English in college because I liked to read, and I thought some man would marry me and take care of me. A career never occurred to me, but none of that worked out very well. I kept going to graduate school, and I kept reading. Then I got serious about writing and somewhere along the way I fell into publishing. Published my first novel in 1984—and it still sells today. I was editor at TCU Press, a small academic press, for ten years and director for twenty. My two worlds—writing and publishing—went together like the proverbial hand and glove, and I loved my life. Now, in retirement and living semi-alone (my youngest daughter and family are yards away in the main house, but I am in the cottage), I am still writing, still loving it. I am neither rich nor famous, but that’s not why I write. I write to know that people read my stories and like them. It’s been a great life, and I wouldn’t trade.

Pigface and the Perfect Dog,
An Oak Grove Mystery, Book 2

Susan Hogan thinks she’s about to meet her maker when she confronts a rifle-carrying man, who looks like a pig, in a grocery store. Jake investigates the body of a young college student, shot in the back and found in an empty pasture. Aunt Jenny showers love on the new puppy a young man from the grocery gave her, but she has to get rid of that heavy collar.

Susan is associate professor of English at Oak Grove (Texas) University; her partner, Jake, is Chief of Campus Security. Aunt Jenny, the maiden lady who raised Jenny, came to Oak Grove to help Susan, who was accused of murdering a coed in The Perfect Coed, first book in the series. How much help Jenny was is debatable, but she made a fast friend in Judge John Jackson and stayed in Oak Grove.

Trouble in Oak Grove begins with the open-carry protestors in the store and leads to a shooting, breaking and entering, threats and an attempted kidnapping, a clandestine trip to the woods late at night. Will Susan Hogan land in trouble…or the hospital…again? Will Susan and Jake survive this as a couple? Susan is still prickly but she learns some lessons about life, love, and herself in this second Oak Grove Mystery