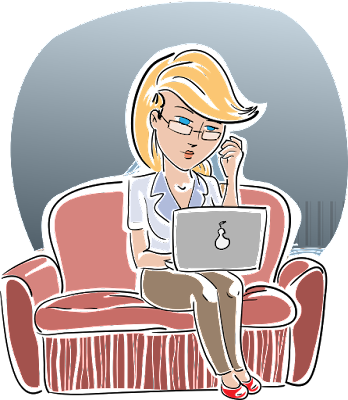 What was your life like before your author started pulling your strings?
It was a bit staid, to be honest. I’m forty-four and divorced for a while now. And you might think that has set me free, but soon after the divorce, my lovely parents were killed in an awful traffic accident. This left me and my brother Graham the owners of the family home (right over the road from the ocean in Drizzle Bay, New Zealand.) It’s terrible having no parents. It’s wonderful having a rent-free home. But Graham is a fusty lawyer. He’s a few years older than me. He’s a bachelor, and showing no signs of changing his life in the least. He’s a stickler for detail and not very sociable, so, sigggghhhhh……I’m a freelance book editor, and I’ve decided to take on house-and-pet-sitting gigs so I can have a bit of freedom. Have laptop, will travel!

What’s the one trait you like most about yourself?
I like that I’m optimistic. What’s the point of being continually worried and sad? Now that I’m free of Duncan Skene – my serially-unfaithful husband – I’m going to arrange my life so I can please myself, maybe have a few men-friends, make the most of my future. I don’t want to get tied down to one man again. (Not yet, anyway!) I can see the future opening up, and it looks good.

What do you like least about yourself?
My ex-husband. To my great joy he lost out on inheriting a share of our parents’ house because we were already divorced. No, that’s a terrible answer; I don’t like my hips. Good boobs though.

What is the strangest thing your author has had you do or had happen to you?
Discovering I was lusting after the vicar was pretty bad. (Not that he was dressed like a vicar at the time.) Finding a body in the aisle of the church was the all-time worst. But strangest? Maybe finding I’d been cast as someone’s mother in a TV commercial in book 2. Then again, she had me feeding lasagna to the local detective who’s the bane of my life and never nice to me. Why did I have to be nice to him?

Do you argue with your author? If so, what do you argue about?
No – she’s OK. I’d like to weigh a bit less, but if I ate less, I could fix that myself. She’s made me very fond of food, and there’s a great bakery in Drizzle Bay, and ten minutes away, in Burkeville, there’s a bar and cafe that’s a total temptation. Run by two American hunks, and I’m still trying to find out their real background. They’re not gay. They’re not father and son. Can they really be ex-Black Ops and in hiding, way down here at the end of the world?

What is your greatest fear?
That I’ll end up alone. I have one brother, who’s showing no signs of reproducing. No parents any longer. And I’m forty-four, with no current partner. I’m going to seriously consider any man my author provides for me.

What makes you happy?
Food, my new car, cats, dogs, walks on the beach, the view from our house (ocean), and nice underwear.

If you could rewrite a part of your story, what would it be? Why?
I did NOT enjoy being tied up for a whole night. I almost peed my pretty panties.

Of the other characters in your book, which one bugs you the most? Why?
DS Bruce Carver – the afore-mentioned detective. He’s really not keen on me being any help to him. He bites his fingernails and wears staggering amounts of cologne. He makes me sneeze and wheeze. There’s no way he needs to wear so much.

Of the other characters in your book, which one would you love to trade places with? Why?
Bruce Carver’s offsider, DC Marian Wick. She has huge eyes and gorgeous legs. (She probably goes running.) I’m sure she’s having a little thing with John at the Burkeville Bar and Café. I wouldn’t mind having a little thing with him myself. So she gets to do all the sleuthy things that I really want to do. She has all the inside info while I have to prowl around the edges as a member of the public.

Tell us a little something about your author. Where can readers find her website/blog?
She’s taking a risk, writing about me! Kris Pearson is the author of sixteen (I think) contemporary romances. They’re sexy and pretty intense. She’s had five of them translated into Spanish. She’s also rewritten five as much sweeter stories. You can find them all at http://www.krispearson.com She wrote the sweeter ones as Kerri Peach. (Peaches and Pears – get it?)

Murder in the Aisle is the first Merry Summerfield book, and she’s more than halfway finished the second, which will be Xmas Marks the Spot. She has at least two more planned. I’ve seen the covers. They’re very different from her romances – that’s why I say she’s taking a risk. But I suspect she wanted a change, and she does have one heck of a sense of the ridiculous, so I think she’s enjoying herself and maybe this is the ‘the real Kris’? She lives in the capital city of New Zealand, and has been married to the same nice man forever. They met working together in TV.

What's next for you?
Finding a quarter of a cow in my brother Graham’s car. With a warning notice for someone I’ve never heard of. A ride in a helicopter. Meeting the vicar’s sister from England. Watching her fall in love with Erik from the Burkeville Bar and Cafe. Being a bit jealous, to be honest. And helping to solve something a lot worse than an old flower arranger dead in the aisle of Saint Agatha’s. Xmas Marks the Spot had us all scratching our heads. 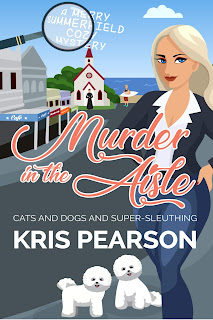 Murder in the Aisle
A Merry Summerfield Cozy Mystery, Book 1

Hi – I’m freelance editor Merry Summerfield, and it’s another fantastic day in drowsy Drizzle Bay. That’s until Vicar Paul and I find Isobel Crombie lying dead in a sea of flowers in the aisle of Saint Agatha’s church. Who’d kill a harmless old girl like her?

In no time flat I’ve scored a house-and-pet sitting gig – Isobel’s remote seaside cottage and her two darling dogs. It comes complete with hollyhocks and seagulls and a SEAL from California who looks a lot like a younger Jon Bon Jovi. He's certainly cute, but aren’t his questions about Isobel's house a bit – well, suspicious?

Then I find a secret office stuffed with alarming files about car thefts and Black Ops assassins. Maybe Isobel wasn't as harmless as we all thought?

Sleuthing’s more fun than I’ve had in ages, but how safe am I on my own now things are unraveling? Little white Bichons are hopeless attack dogs.