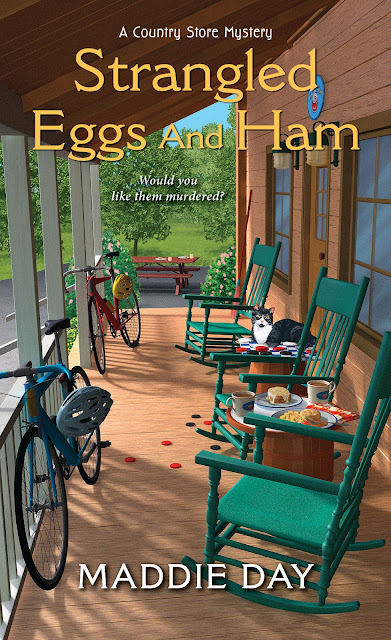 Maddie Day writes the Country Store Mysteries and the Cozy Capers Book Group Mysteries. As Edith Maxwell, she writes the Quaker Midwife Mysteries, the Local Foods Mysteries, and award-winning short crime fiction. With eighteen novels in print and five more in production, Maxwell has been nominated for an Agatha Award six times. She lives north of Boston with her beau and two elderly cats, and gardens and cooks when she isn’t killing people on the page or wasting time on Facebook. Today she joins us to talk about why she set a series in Indiana. Learn more about Maddie/Edith and her books at her website and the Wicked Authors blog.

Why Set a Series in Indiana?
Several decades ago, I spent five happy years earning my doctorate at the flagship Indiana University campus in Bloomington.
It’s a school that every generation of Maxwells has attended and of which my great-great-great grandfather was one of the founders (also: my great-grandfather was the first dean of the IU Medical school, my grandfather was captain of the IU basketball team in 1916, and my own father was an undergrad there). Think huge university in a small town. You can walk or ride a bike everywhere. People are friendlier and talk more slowly than in the northeast. And neighboring Brown County is as hilly and pretty as Vermont.

The seed for this series was this: a fellow grad student named Benjamin dropped out of the IU Linguistics PhD program in the late 1970s. With his girlfriend he bought a run-down country store in the town of Story fixed it up into a breakfast restaurant as well as a bed-and-breakfast establishment. They served whole-wheat banana walnut pancakes, which I make to this day, and which figure prominently in my books. The Story Inn still exists, although my friends don’t own it any longer.
When I was imagining how this series might play out, I conjured up a twenty-seven-year-old woman named Robbie Jordan who grew up in Santa Barbara, California. Three years after Robbie moves near her mom’s sister Adele in Brown County to work as a chef, Robbie’s carpenter mom dies suddenly. Robbie uses her savings and a small inheritance to acquire a run-down country store filled with antique cookware. She uses the carpentry skills she learned from her mom to transform the place into a breakfast and lunch restaurant, later adding three B&B rooms upstairs.

I’ve been having a ball remembering and researching phrases and pronunciations from that part of the country. “I might could do it for you.” “Faster than green grass through a goose.” “I can’t eat another bite ’cause I’m as full as a tick.” Actual small town names are awesome: French Lick, Bean Blossom, Gnaw Bone, Floyds Knobs, and so on. When I saw South Lick Creek on a map, I knew that was the name of my fictional village. Strangled Eggs and Ham is the sixth book in this popular series, and there will be at least nine, plus a novella coming out in Christmas Cocoa Murder this fall.

(Note: a version of this post first appeared on the Wicked Authors blog in 2014.)

Readers: what are your favorite colorful sayings?

While Robbie scrambles through breakfast orders South Lick, Indiana, tempers run as high as the sticky August heat. A developer’s plans to build a towering luxury resort at one of the most scenic hilltops in Brown County infuriates opponents, who concoct protests and road blockades. When tensions boil over and a vocal protester is silenced forever at the resort site, Robbie ditches the griddle to catch the killer. But if slashed tires are any indication, she’ll need to crack this case before her own aunt gets served something deadly next . . .

Dear Edith (Maddie): I am a Hoosier "born and bred," as they say. I followed my parents to IU decades ago. They loved to meet at Nick's, didn't have cars to drive to Brown County; but I did travel there and even did my student teaching at Smithtown HS.
My pedigree at IU isn't as strong as yours with no famous name. I have to mention that my mother was an editor of the Indiana Daily Student in her senior year before getting a journalism job in Fort Wayne, where I was born. Several younger relatives who married into our family are also IU graduates.
My parents visited French Lick, IN to stay when going to the Kentucky Derby in later years. We weren't small town IN people, but you can use any of these places in your next IN book if you wish.
Thanks for sharing your memories! I know I will enjoy the setting and your interesting plot as always.